Original Web Masters on View in NY to December 2 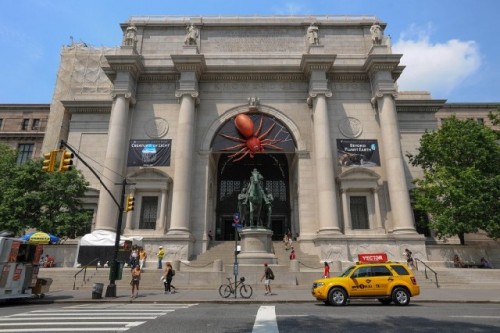 The Museum’s Spider Show is packing them in. 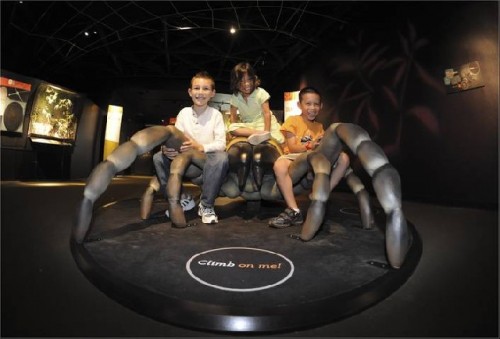 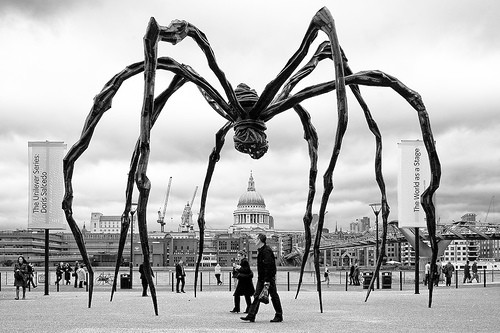 A Louise Bourgeois sculpture on view in London. 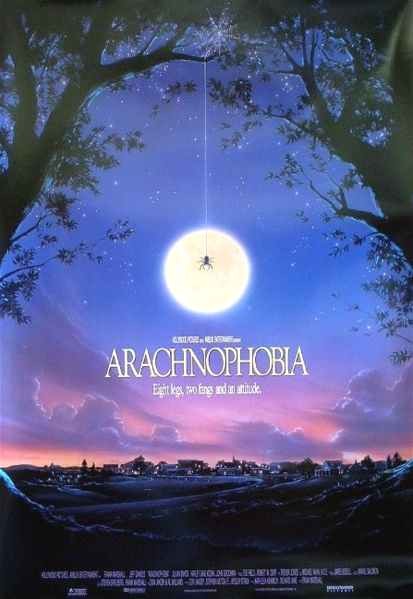 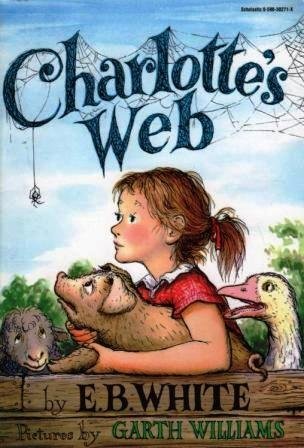 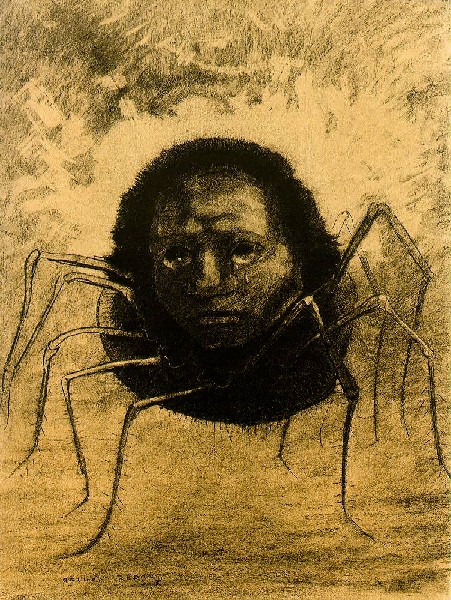 An image by Redon. 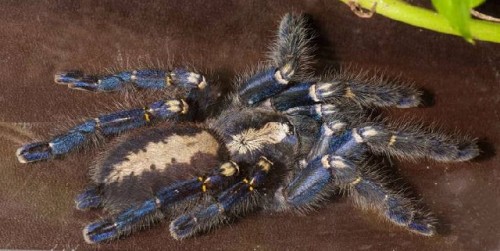 Spiders! You may love them like Wilbur the pig in Charlotte’s Web, E. B. White’s classic children’s book or they may frightened you away like Little Miss Muffet eating her curds and whey.

As for me, well, I wouldn’t want to find one climbing up my arm or falling on my head unexpectedly. I want to know exactly where they are at all times but I have spent many a fascinating hour reading about them, watching them spin their webs, catch their prey, enjoy their meals, mate, tend to their eggs, and hatch the next generation.

For a short time during my junior high school days I even kept a family of Black Widows in our garage, that is, until a roly-poly classmate of mine – there’s always one in every group – deliberately killed the entire widow family by spilling a beaker of sulfuric acid on them following a Show & Tell session. I suppose he thought he was saving the neighborhood.

They have always fascinated me. And I am not alone.

Mutant killer spider B-movies – have turned hand and eye bringing the critters to the public’s attention, frequently in demonic situations that stroke our unconscious, though deeply seated fear of being bitten by a spider.

Those suffering from arachnophobia (an active fear of spiders) have it worse. Amplifying this fear, they conjure up visions of being caught in a spider’s web, wrapped in silk, and having their blood sucked dry. It is a thought not too far removed from being attacked by a vampire. Movies have successfully capitalized on these themes. Think Twilight and Spiderman, both the multi-billion dollar movie franchises. You can also throw in for good measure the play Spiderman: Turn Off the Dark, currently one of Broadway’s top moneymakers.

Out of the thousands of spider-centric artworks that have crossed my path – and I do collect them visually – the work of three artists, each portraying the spider in a different manner and medium, have managed to etch itself onto my brain.

More often than not, first to come to mind when I think of spiders, is Arachnophobia (1990), the American made horror comedy film. Hawked with the tag line, Eight Legs. Two Fangs. And Lots of Attitude, the story, which had audiences brushing imaginary spiders off their shoulders, centers on a newly discovered race of deadly Venezuelan spiders. A male spider accidentally transported to a small American town – in a coffin with a dead body no less – finds himself a mate who multiplies aplenty. Soon, countless offspring begin to pick off the town's residents. Three hundred and seventy-four, live but totally harmless, creepy crawly Avondale spiders from New Zealand were used in the movie.

Less well known are the exquisitely rendered spider drawings of French artist Odilon Redon (1840-1916) which takes on a friendly anthropomorphic view of the spider. In "Smiling" an 1881 lithograph described by J.K. Huysmans in his classic novel of decadence A Rebours (1884) – translated Against Nature – a grinning spider, with ten legs rather than the usual eight, is seen performing a lopsided dance. In Crying Spider (1881), the artist adds a human face to the spider’s body which art historians Katarzyna and Sergiuze Michalski suggest – in their fine little book Spider (Reaktion Books – 2010) — might be a depiction of the artist’s own mental anguish. In a letter written to his wife just before he began his series, Redon relates the story of a spider he found on his red bolster. He subsequently befriended and placed it on a wall so ‘she’ could  watch him work. Perhaps remembering Michelet’s description of the love life of spiders as the ‘dark romances of our ceiling’, the artist associates the spider with his beloved spouse.

The most wondrous spiders in art – “an ode to my mother” the artist is quoted as saying – belongs to Louise Bourgeois (1911-2010). Though producing art since the 1940s, it wasn’t until Maman (Mother) Bourgeois’ late nineties series of humungous spider sculptures – one sculpture is over 30 feet tall and 33 feet wide – that fame began to attach itself to her with museum’s all over the world standing in line to show, as well as buy one. “My mother was my best friend,” Bourgeois liked to say. “Like a spider, my mother was a weaver. My family was in the business of tapestry restoration, and my mother was in charge of the workshop. Like spiders, my mother was very clever. Spiders are friendly presences that eat mosquitoes. We know that mosquitoes spread diseases and are therefore unwanted. So, spiders are helpful and protective, just like my mother.”

In 2011 one of Bourgeois’ Spider works sold for $10.7 million, a record price for the artist at auction, and the highest price paid for a work by a woman artist.

Cleverly cashing in on this Spiderman craze – Why not! They do house the world’s largest research collection of spiders – is the American Museum of Natural History’s mini-blockbuster Spider’s Alive! Populated by hordes of excited children with parents in tow, this show which runs through December 2 appears to be the most popular exhibition in the city.

Lots of yellow school buses were lined up the day I visited. Essentially an introductory Spiders 101 course, using real live spiders – a spider zoo if, you will – as the big draw, the exhibition, boosted by videos, lots of signage, and mesmerizing Tarantula demonstrations magnified on a video screen  – highlights the spider’s anatomy, behavior and unique characteristics. Adding a playfulness to the event – no doubt to let the little ones know that spiders can also be lots of fun – the exhibition also includes a colorful gigantic spider sculpture on which visitors’ can sit to have their picture taken.

The exhibition, with some 20 spiders, each residing in their own aquarium-like habitat, reminiscent of the tropical fish section of a pet shop, is situated in three, or is it four, large rooms. The overall lighting of the exhibition, a mood-setting, frisson adding a darkness that emphasizes that it is just you and the spiders, is bit scary, like a horror movie.

The trick, as well as the fun, since many of the spiders seem to r lost” among the foliage of their habitat, if not hiding from all the peering eyes, is to find the spider and hope that it does not jump out and get you. Not that that can happen but the thought continues to lurk. Tarantulas demonstrations aside – due to their large size, black hairy body, and seemingly docile demeanor, they always get the starring role – it is the poisonous spiders with ‘killer’ reputations like the Black Window, or the South American Brown Recluse, the so-called supporting stars of the exhibition, appear to get the most attention.

I can still hear one child, excitedly jumping up and down, asking his father is it really true that this tiny weenie spider with the red mark on it belly can kill a person. The father’s answer, “Only if it bites you.”

While many people think they know everything there is to know about spiders, after all they have been around for at least 350 million years, the exhibition lets us know that there is a lot more to these little creatures than meets the eye. Signage tells us that there are more than 43,000 species of spiders to date. They inhabit every continent but Antarctica . Less than 1% have venom dangerous to humans. An acre of woodland spiders can consume more than 80 pounds of insects a year. All spiders have 8 legs, eight eyes, arranged in patterns that vary for particular groups of spiders, and fangs. Most web-based spiders have lousy eyesight. However, non-web spiders that actively stalk and hunt down their prey have excellent vision.

Spider silk is produced in glands inside the abdomen. Each silk gland leads to a particular spigot that opens to the outside through one of several paired spinnerets. A spider “reels” out silk by gently pulling it from a spigot with its two hind legs. Spiders taste and smell through sensory organs on their legs as well as on their pedipalps (“feelers” on the face). They also hear by sensing vibrations through the hair and tiny slits distributed over much of their body.

The most exciting, and visually informative part of the exhibition – certainly for those viewers who want to see some action, as most of the spiders just sit and watch you watching them, are the videos which accompany each individual spider type. It is here that we get to see various species of spiders court their spouses, weave their webs, stalk, trap, catch, and kill their prey, as well as mate.

The species of spiders on display, as well as in the videos are manifold in their personalities. It may come as a shock to many, but not all spiders live in web. Some spend most of their time in underground burrow, emerging mainly to grab prey.

The Wolf spider, aided by sharp vision and it ability to sense vibrations, searches for food on foot. The Fishing spider rests it legs on the surface of the water on the shoreline and when some gets close it pounces, while the Bolas spider lures male moths into their grasp by creating a suspended ball of sticky silk with chemical properties that mimic female moths. The Goliath bird eater, one of the largest spiders in the world, preys on snakes, mice and frogs but, despite the name, rarely birds.