Jean Helion Collected with an Introduction by Deborah Rosenthal 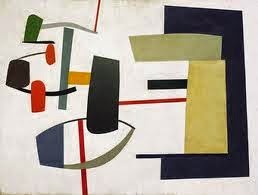 An abstraction by Helion. 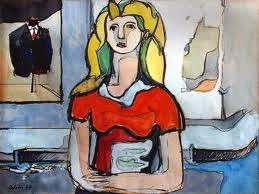 Portrait of Pegeen by Helion. 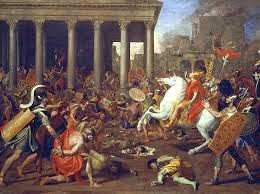 Conquest of Jerusalem by Poussin. 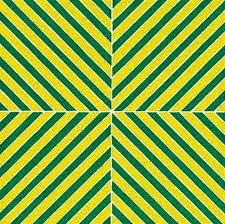 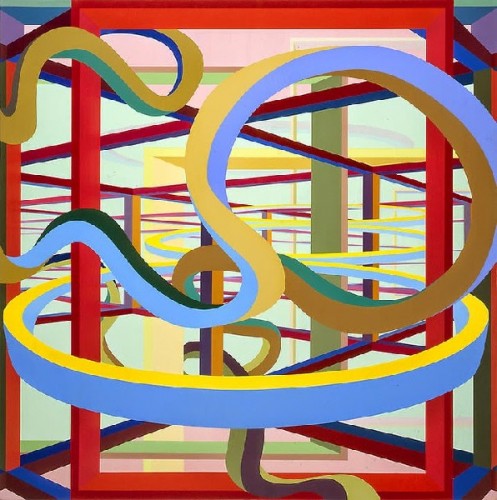 Recalling a conversation I had with Bill Bailey sometime in the Nineties, when I was making a transition from Figuration into Abstraction, in which I expressed the notion that maybe Abstraction one day would evolve into a trans-historical movement similar to Chinese landscape painting where Ming artists were still in dialogue with Sung artists. There would be an assumption of a metaphysical basis that was so rich and deep that one could forever draw upon it for inspiration. At the time I was playing with figure/ground tension, as I perceived it in the work of Al Held. It resulted in visual events where the eye is drawn into a visual play that keeps the painting alive. I can imagine abstract artists of the future being drawn to Held’s work for the same lesson it provided me about painting and moreover in the “Big N” the shared space of the visual with the written word. This dialogue would be akin to the hermeneutic circle espoused by Gadamer, where the present is always in dialogue with the past. The artist could be projected into a new space but only after orbiting an earlier conception of reality. Sort of like a satellite achieving escape velocity from an orbit around the earth,

I recently received a copy of “Double Rhythm” (subtitled: “Writings About Painting, Jean Helion”), collected and with an introduction by Deborah Rosenthal. I had written about his influence on American figurative artists in another blog post, so I was pleased to have the opportunity to read his essays onart and in particular learn more about his life as an abstract painter. Helion started his career in the Twenties as an abstract painter in France, moved to the United States in the Thirties where he exhibited his work and wrote extensively on art. He returned to France at the outset of WW11 and embraced figuration after the war. The quality of the figuration was such that it had an enormous impact on a generation of American painters in particular Leland Bell, who in turn as an educator became an important force in the figurative revival of the late Sixties and Seventies. The essays range from an interesting analysis of how Abstraction evolved from Impressionism to an extended description of his life as a prisoner of war in Germany and his spectacular escape. There is no doubt from Deborah Rosenthal’s introduction (also published separately in the “Yale Review” this October) that Helion was a major player in the movement of abstraction and instrumental in introducing European abstraction to an American audience. I was intrigued by the level of self-awareness he expresses with the questions he raises about notions of lineage. What was the essence of Abstraction? Is it found in the relation of reduction to complexity and growth? Are they mutually exclusive or can reduction lead to complexity? The questions all appeared to me to be crucial to any self-awareness of an artist painting abstractly .

This notion of the hermeneutical way of thinking that I referred to in the first paragraph is evident throughout Helion’s writings. One intriguing essay tries to untangle the origins of Abstraction’s roots in Seurat and Cezanne. Who was more important in influencing Abstraction? Helion comes down on the side of Seurat. Cezanne, he feels, is still attached to the real space of objects and is more Janus-like looking backward as well as forward. Seurat’s work lends itself to further reduction, which is crucial to abstraction. Whether you agree with his analysis or not, it, again, seems important that this sort of question be asked by any artist embarking on the path of abstraction.

After the war his work turned decidedly toward figuration. As he describes in “They Shall Not Have Me” about his imprisonment and escape from a forced labor camp, his fantasies always turned to the untrammeled life of the city. Upon his return, it became his subject matter. He also wanted to achieve what he called “the maximum” in painting, a word he was fond of and something he found in Poussin. It is strange this haunting of the real that pursues abstract painters like the hound of heaven. Stella who started out his career embracing Abstraction and reducing it further to minimalism made an about face in his Norton lecture “Working Space” after sensing the power of Caravaggio’s work in which I assume he found the same sort of maximal qualities that Helion found in Poussin. Caravaggio had it all, abstraction, dynamic relation of parts to a whole. But most importantly a sense of the real, the feel of things as they present themselves to us moment to moment in deep space. Helion seems to say that the road to reduction can only go so far. Is this what Helion felt was being done to him as a POW ? Reduced to an animal, or a mechanical cog defined to fulfill narrowly designed tasks? It were as though music could aspire to no more than the reality of a hearing test in a soundproof box. I have written elsewhere of what I call the Humpty Dumpty effect of Modernism. It breaks things down but never lets us put them back together again. That there is a tragedy in all of this reduction is not often seen.

His imprisonment I think had a two faceted effect on his art after the war. Imprisonment was both cold and abstract, yet human and real. Although reduced to a unit of production by the prison system, Helion’s day–to-day life as a prisoner was managed by human beings. If the system that enclosed him was “not to have him”, he had to be conscious at every moment of how to manipulate the actors of the prison system by an appeal to their humanness so as to avoid the most painful jobs that could kill him or to coerce out of then the pleasures we take for granted in the real world, such as coffee and cigarettes. Every gesture every word had to be judged as to whether it aided or impeded survival. When he escapes and finds at one point that his ruse was working to deceive the omnipresent police, he breathes a sigh of relief and says: ”Good”. This expression of relief sounded so true and real to me as to render everything we might think is good about our lives inconsequential.

The title of the collection of essays “Double Rhythm” refers to the dynamic that should exist in a “maximum” painting between the parts and the whole. Poussin is quoted by Helion as having said : ”I have ignored nothing.” I mentioned above how this notion of complexity haunted Stella. This notion of parts and whole clearly was an obsession of the late Held. The early work of both with limited numbers of color looked to achieve one visual punch. Held’s midcareer work imposed pure geometric order, an overall structure, which resembles a schematic drawing of the linear structure hidden in a Poussin or a Piero. The work at the end of his career tried to bring the two together, using color for visual impact in the parts but engaging geometry to tie it all into a whole. I recall listening to Guston in the 70’s talk about the importance of Piero to his work. It was the admiration for someone who could do it all: Piero had Christian metaphysics and a language of geometry to imbed that metaphysic into the painting.

This interest in the “maximum” sought by these artists is attempted without what I would believe to be the necessary foundation in an overarching world view. To see our individual existence in that context has not been possible, since Ficiino and Pico de la Mirandola attempted the NeoPlatonic /Christian synthesis of the Renaissance that inspired Botticelli and Piero de la Francesco . But that does not stop someone like Helion from attempting to make paintings which he, to use his own words, will be ”loud with meaning”.