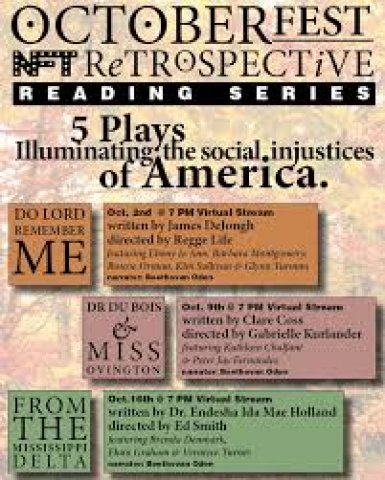 Octoberfet. New Federal Theatre
Woody King Jr.'s Federal Theater presents Octoberfest: Five plays that reawaken, inspire, and remind us of the struggle for freedom and dignity of African-Americans. Each piece, with its own history of previous production success, has been re-imagined. Billed as readings, seasoned actors and directors take us to a new form of theatrical communication in the “zoom style” medium.

We are presented with the microcosm of the changes wrought by a generation. The drama was presented as a montage of monologues describing incidents in Holland's life. Gracefully utilizing the “zoom style” medium which our “darkened stage era” requires, Smith and Scutchins build a vivid picture through the voices of three actors,{Brenda Denmark, Elain Graham, Verneice Turner} and a narrator, Beethovan Oden. The three women speaking directly to the audience, do far more than a reading. They sing, they cry, they demand that we believe the stories which unfold. We are carried into the the neglected corner of the delta where the relationship of white and black has changed little since the days of slavery and the hopes of escape are almost as treacherous and uncertain. We swell with a sense of pride and growth as the character's personal hopes for a better way of life blend and become part of the national voice for change.

The piece confronts the trauma of survival as Medal of Honor winning African-American Vietnam vet, Dale Jackson, (Beethovan Oden) suffers a collapse of his mental health and is treated by a Jewish psychiatrist at a Veterans' Administration hospital. The doctor (Micah Stock) is himself a survivor, the child who was sent out of harms way as the Nazis entered Poland. No one in his family survived. Jackson saw every man in his platoon burned when an ambush struck their tank. He had been transferred to a different tank.

Why did I survive, while others became cinders? Both men live within the essence of this pain. The veteran blames himself not only for his survival but for having become a killer himself. The brutal irony of his life is that he feels that he has been rewarded by our country for being exactly what he was brought up to know is wrong.

Cole's script, a dialog within the confines of the doctors office, poses the pain of a generation. The children of the post WWII 'boom' whose values were built upon our victory over fascism, found themselves confronted by becoming the enemy. Jackson embodies the African-American struggle to achieve what is rewarded by the country and at the same time ignore the loss of so many lives in the process. Irby's skillful timing of the minimal action drama is purposeful and effective. We feel the tension between the two men, and although they are not in fact facing each other on stage, they do face off in this poignant piece. Oden and Stock work well 'together', and their ability to respond to each other's energy creates a strong realistic feel.

The Festival has also reached back having re-imagined James De Jonah's Do Lord Remind Me. The play is based upon the compilation of recorded memoirs of formerly enslaved contributors made by the Federal Writers Project in the 1930's. Hearing the stories “in their own words”, is a powerful way to experience the presence of the past.

Yet to be released is Stories of the Old Days by Bill Harris. In this piece, two people in their 60's, whose life stories are very different, reflect upon their lives. This production is available for viewing beginning Friday October 30 at 7pm. It will run through Sunday November 1 at midnight. I would recommend it. This series has powerfully re-envisioned visionary classics.