Miller's All My Sons

California's A Noise Within Theatre 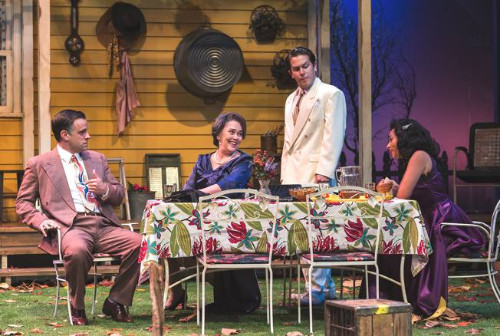 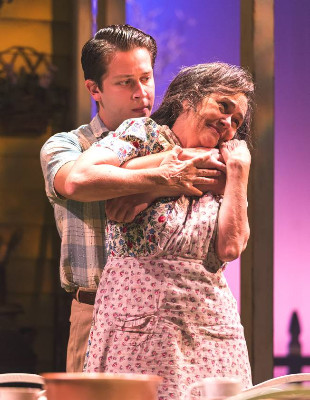 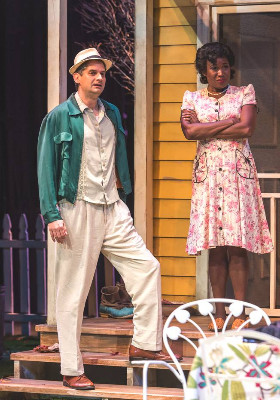 A Noise Within (ANW) Theatre production of Arthur Miller’s powerful drama “All My Sons”, opened on the actual date and year of Miller’s 100 year annivesary. He was born on October 17, 1915. It was a good omen.

A Noise Within theatre company is one of California’s finest production companies that present, in repertory, mainly classic theatrical productions along with iconic American playwrights like Miller, Tennessee Williams, and Eugene O’Neill. ANW’s Fall 2015 Repertory Season consists of Feydeau’s classic farce “A Flea in Her Ear”, and Anouilh’s “Antigone” along with Miller’s “All My Sons”.

Arthur Miller is one America’s greatest playwrights and one who understood the term ‘experiencing the unique American dream’; along with its melting pot cultural contributions that are woven throughout his work. Miller and Paddy Chayefsky, arguably two of the finest writers with the greatest ‘ears’ for dialogue of working-class America, along with the argot and speech patterns of the immigrant populations that swept out Europe and into the east coast of America’s urban cities during the early 20th century. Where Miller and Chayefsky captured the flavor and speech of northern urban America, Williams understood and wrote his dialogue profiling the strength of Southern women.

America went to war in 1941, but not all of America. There were those who had to stay at home and man the war industries of building airplanes, ships and the weapons of war. “All My Sons”, nicely directed by ANW co-founder Geoff Elliott centers around the Keller family of a fictional Ohio city set in 1946.

Joe Keller (Geoff Elliott) a businessman and owner of a manufacturing company that supplied airplane engine parts to the government during the war is caught up in a scandal surrounding the deaths of twenty-one pilots whose planes crashed due to faulty engine parts. Keller during the investigation, blames his partner and next-door neighbor Steve Deever for knowingly shipping the faulty parts. Keller, is exonerated while Deever serves a long prison sentence.

Elliott delivers a finely judged performance as Joe. Some may come to the performance expecting to see a Lee J. Cobb interpretation (he created the role on Broadway) or Edward G. Robinson’s disciplined turn in the movie version. No matter your expectation, you will leave the theatre knowing you saw the plight of a real family in crisis mode.

Kate Keller (Deborah Strang) plays Joe’s wife and the mother of Chris (Rafael Goldstein) and older son Larry, a WW II fighter pilot who has been listed as MIA, and presumed dead by the government. She is living in a state of denial concerning her missing son Larry. She refuses to believe he’s dead. Family and friends know better but no one wants to be the one that sends Kate over the edge. Strang’s heart-rending final scene is achingly poignant and connects emotionally with every parent in the audience.

The Kellers are a flawed family with secrets that ultimately set in motion a series of confrontations between father, son, and mother, along with their neighbors, that even affect Ann Deever (Maegan McConnell) Larry’s old girlfriend. Chris wants to marry Ann who has accepted that Larry is never coming back alive. But the sticking point in accepting Larry’s death and Ann becoming a daughter-in-law to Kate, is the public acknowledgment and acceptance of Joe’s culpability in the death of his older son Larry. Neither parent can face or process that information. It’s just too painful.

Solid support comes from Rafael Goldstein as Chris, Maegan McConnell as Ann, and a nicely controlled performance from Aaron Blakely as George Deever (a role that can easily get too intense, if one is not careful).

Miller was heavily influenced by the great Greek playwrights Sophocles and Aeschylus, who dealt with the Gods and the tragedy that befalls the ‘common man’ when he steps out of line. Joe Keller is one of Miller’s common men, caught up in a situation that is of his own making, but whose actions set off a domino effect producing collateral damage to those around him.

“All My Sons” is realistically mounted on ANW’s thrust stage and is energetically and intensely performed by a talented company of actors. Even today, the story of the flawed Keller family dealing with deep-rooted conflicts still resonates sixty-nine years later. That sort of tells us that either we haven’t learned a thing about ourselves or that nothing in society has changed in the intervening years.

The technical team credits led by Director Elliott are first rate. Scenic Designer Frederica Nascimento provides a generous space for the actors to perform their magic under lights designed by James Taylor; allowing us to see the spot-on period costumes designed by Leah Piehl. Audiences, however, should be prepared to fasten their seat-belts while watching this potently performed production.

“All My Sons”, performs in repertory at A Noise Within theatre through November 21, 2015.