The Death of Klinghoffer Arrives at the Met 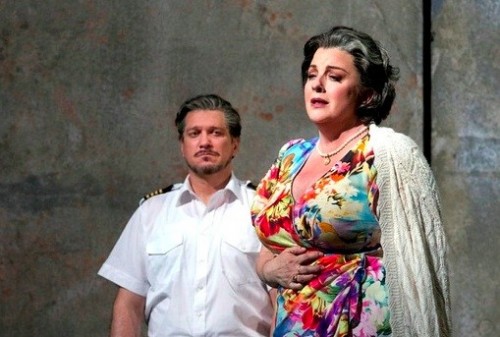 Paolo Szot as the Captain and Michaela Martens as Marilyn Kinghoffer. 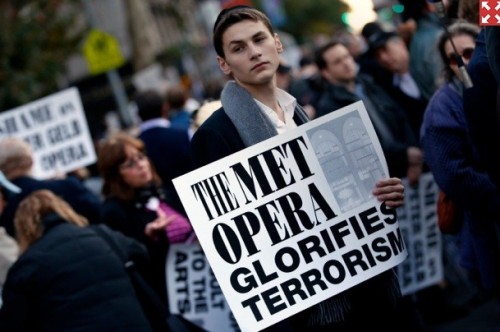 Protestors outside the Metropolitan Opera House

Is Death of Klinghoffer an opera for the ages? Who knows. It may survive because of its subject and not in spite of it.  It has always been controversial, but it has never been protested until this summer in New York.

The Metropolitan Opera production of Klinghoffer makes a wonderful argument for the opera's value as entertainment and provocation. It is unlikely that the Met, fraught with its own internal problems, wanted Abe Foxman and the ADL to foment a cause celebre. But when this happened, they may have hoped the house would be packed for all performances.

The house was by no means full on Friday, but clearly this is an opera for all ages.  The heartening news is that much of the audience was young and enthusiastic.  Leaving the opera house, couples talked about coming back and also what they wanted to see. The coveted 'future of opera' audience had been snagged by the controversy and then roped in by a terrific production of a compelling story.

Arguments about whether or not this opera is of sufficient quality to belong in the Met lineup are silly. The production from England features stunning videos by Finn Ross, one of the artistic directors of The Curious Incident of the Dog.  The opera's sock and shock visuals are as exciting as those in the play. For a long time, this site has argued that projections are one answer to the cost of opera production. In Klinghoffer, the Met has affirmatively embraced the idea by employing Ross, a superb talent.

Paolo Szot singing the role of the Captain on some disenchanted voyage is a dynamic and touching performer. Alan Opie, even in an odd post mortem aria about flying into the sea, sings with his rough hewn, dramatic baritone.  The hijackers were sung by Sean Panikkar, Aubrey Alicock, and Ryan Speedo Green.

Michaela Martens shone as Marilyn, a devoted wife and anguished widow.  Her lovely mezzo ranged high and low comfortably, and she has a big-voiced throatiness that suited the music.

Jesse Kovarsky danced Omar in choreography by Arthur Pita. He is a whirling dervish and contrasts with a sequence of a penitent Christ in the desert.

The chorus is star, and the Met outdoes itself here. Listening to music that has been referred to as a Bach Chorale, you feel throughout a religious sense of both calm, terror and horror.  Some have said that Philip Glass does this better, but I prefer Adams who always honors melody, the glue of music.

Listening to the chorus, you sink back and feel the first response of two different cultures which both honor a God. The net result in a death is horrifying, but not unexpected.  Adams binds the cultures in his harmonic choices and the overall tone.  Perhaps this disturbs more than the stated ideas?  The similarity moves us to both sides. Is this cause for banning an opera?

David Robertson conducted the piece with serenity and bold sweeps.  The cellos which dominate the score were particularly moving.

All art should be permitted expression, although it does not have to be subsidized by the government and taxpayer dollars.  The daughters of Leon Klinghoffer wrote a program note for the Metropolitan Opera. They argue that “terrorism can not be rationalized. It cannot be understood. It can never be tolerated as a vehicle for political expression or grievance.”

An idea consummately to be wished.  However, terrorism does exist. Someone like Mohammed Ata, lead promulgator in 9/11, had empty eyes leading into his empty soul.

The terrorists in this opera are human beings. We do not know what has been said to them to get them onto the Achille Lauro cruise ship where they kill a passenger, but none of them are empty-eyed. Is this an unrealistic picture? Probably not.  One day we as a country will have to leave the Middle East to settle its own affairs. Understanding the interests, fears and desires of your enemy is step one to a peaceful resolution of conflict.

The Death of Klinghoffer is terrific drama. It also leaves you with more feeling for the enemy. Is this condemnable?

Justice Ruth Bader Ginsburg was among the notables in attendance on opening night of The Death of Klinghoffer at the Metropolitan Opera, Oct. 20. Ginsburg, who is Jewish, maintained in a recent talk at the University of California that the work does not promote terrorism, nor is it anti-Semitic.  She also said she disagrees with the Klinghoffers' daughters, Lisa and Ilsa Klinghoffer, who, in a note printed in the Met Playbill, wrote that the opera "presents false moral equivalencies without context [and] rationalizes, romanticizes, and legitimizes the terrorist murder of our father."

Not at all, says Justice Ginsburg. Rather, the opera "is a most sympathetic portrayal of the Klinghoffers. Both of them come across as very strong, very brave characters.... There was nothing anti-Semitic about the opera."