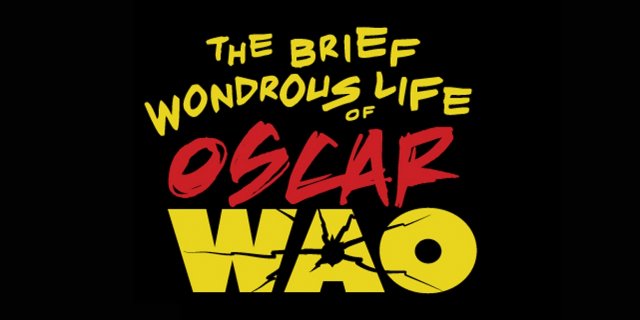 Repertorio Espanol presents Oscar Wao
Repertorio Espanol Presents The Brief Wondrous Life of Oscar Wao based on the novel by Junot Diaz. It is written and directed by Marco Antonio Rodriquez, with assistant director, Victoria Perez.

Rodriquez skillfully compresses time, and hones the incidents and catastrophic events of Oscar's life to bring us a humorous and poignant performance. The Pulitzer winning novel (2008) creates a painfully socially dysfunctional character.  A young Dominican man armors himself within the world of sci-fi fantasy in order to weather the difficult process of assimilation. The story is as much a tale of one man's unbearable loneliness as it is a metaphor for the scars and trauma of ruthless dictatorial oppression, social fragmentation, ultimate immigration and assimilation.

We meet Ocsar (Edgar Sebastian) in his dorm room at Rutgers University as he meets his new room-mate Yunior (Mario Peguero). As the two young men begin to unpack what will become the driving relationship of the drama, Oscar's older sister Lola, (Altagracia Nova) also a Rutgers student, drops in to welcome him. The three stand off in a playful but meaningful triangle which reflects the dilemmas of the second generation immigrant.

Yunior has gone the route of the super-social, as a playboy and man about campus. Lola, has become a high achiever and a seeker of information and identity in her African and indigenous roots. Oscar has closed himself off from others, grossly over-eating, remaining alone in his dorm in a world of sci-fi fantasy. Sebastian, Peguero and Nova have perfected a rhythm with each other that serves as an anchor throughout the performance. Yunior and Oscar do find one thing in common; they are both writers. Oscar is ever immersed in telling tales of romantic sci-fi. It is Yunior who ultimately tells Oscar's story. Peguero adeptly grows with his character, moving from playboy to author as his commitment to his friend and the story of his life becomes his own mission.

Our set is the dorm room itself, replete with large super-hero wall images, changes little as it serves as cafeteria, hospital,and home . It is the the inner construct of Oscar himself, an anti-hero who interprets his life through the words and images of science fiction and super-hero video-games. The scenic designer (Melanie May) and lighting director (Ines Zapata) create stark fantasy imagery, largely in red white as the backdrop for the drama. The interface of the real and the fantastic is supported by sound design --Nathan Leigh and costumes by Leni Mendez.

Marco Antonio Rodriquez as writer of both the Spanish and English, works smoothly with Sara Buitrago creating spirited and effective subtitles which are discretely and usefully located. The dialog is colloquial slang and colorful. They are translated appropriately and allow the English speaking viewer to remain engrossed in the dialog. Spanish dialectical usage was directed by Yolanny Rodriquez.

Oscar's tragic, albeit comedic road to ruin is his inability to make-it with women. This inability to read social clues, to assert himself effectively, and thus be “the man” that others expect him to be. This leads him further and further away from being able to have a girl friend or to even be kissed. Despite the diligent efforts of his friend Yunior and his sister Lola to remake him in a more socially able image, Oscar fails to be able to change. The women in his life, Jenni and later Ybon, (Belange Rodriquez) are women hardened by abusive sexual relationships who seek the comfort of his asexual romanticism. The vengeful jealousy of their paramours (Alfonso Rey in multiple roles) is a danger unseen by Oscar, although understood clearly by his family.

His mother, Beli (Maite Bonilla) is the stereotypical hard working immigrant, whose three jobs and penurious savings have put her two “American” children in Rutgers, as well as caused her to neglect her own health. She has buried her own traumatic early years in a brittle armor of hostile invective. She sees harsh words as honest demands for her children's success. But in truth she neither understands their successes nor their “failures.” Bonilla brings us flawlessly from this overwhelmed middle-aged matron, back to the hopeful and scarred adolescent, and back again to the tragic reality of her life's path. We see the truth of the arc of the family's journey through the voice of the grandmother, Inca, (Arisleyda Lombert) who has remained in the Dominican Republic running her bakery. Always ready to welcome her children and grandchildren, it is through her voice we can hear the hopes and the desperation that has set the family's course.

Sebastian is able to portray both an endearing and sympathetic character and the obstinate incorrigible impediment to the family's fantasies of success. The sense of a family cursed hangs over them. Yet their ability to love and to struggle for decency and loyalty hold them together. The humor and tightly written dialog and the smooth and genuinely joyful energy of the cast make us leave the theater less cursed than we are blessed by our ability to love and laugh.