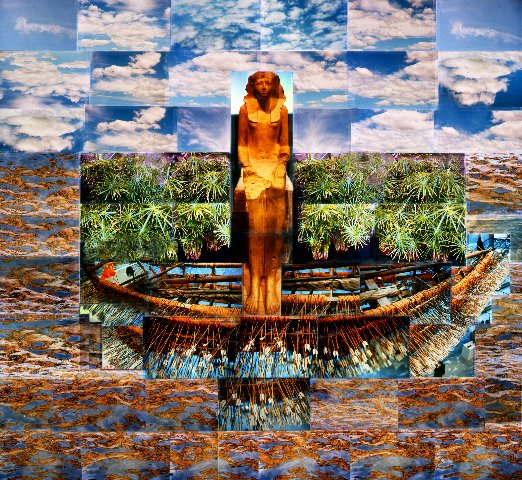 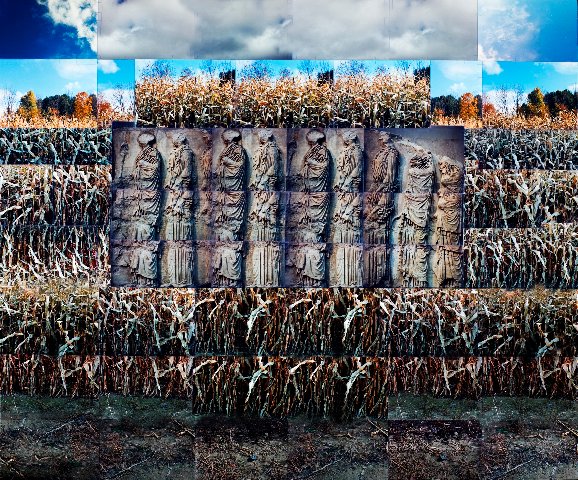 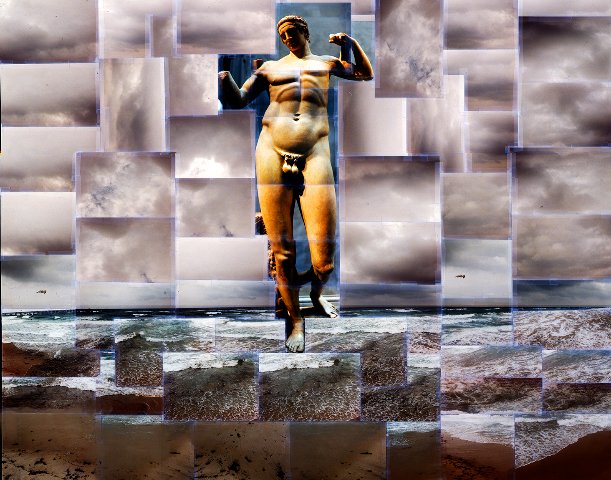 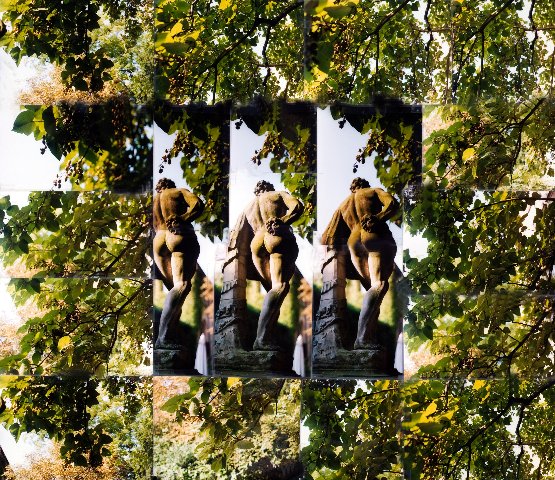 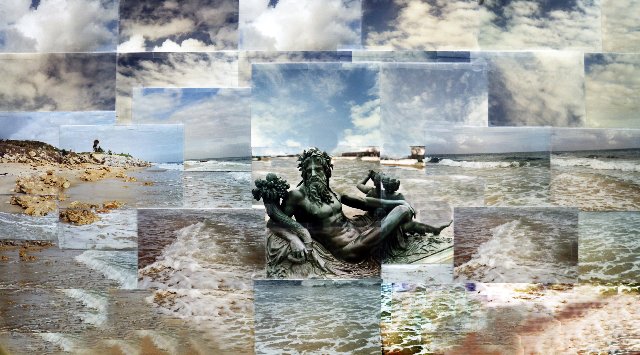 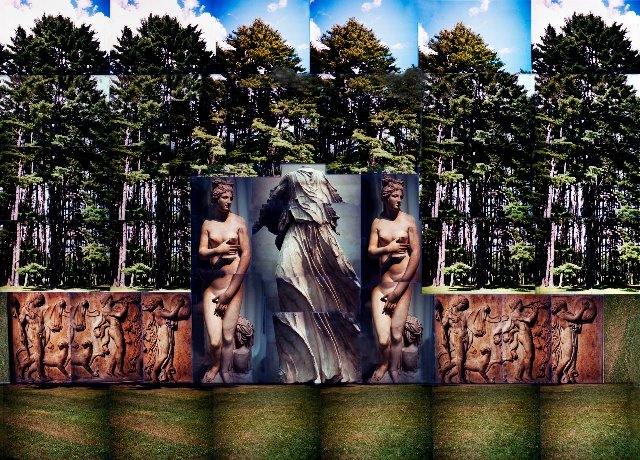 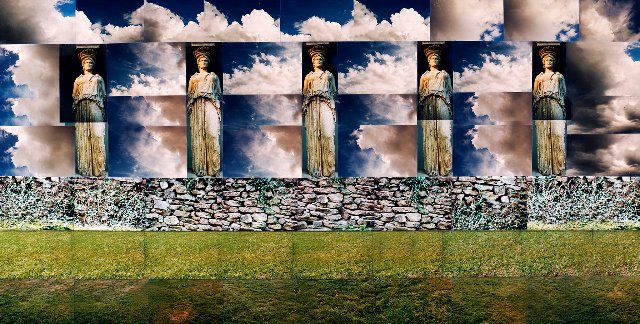 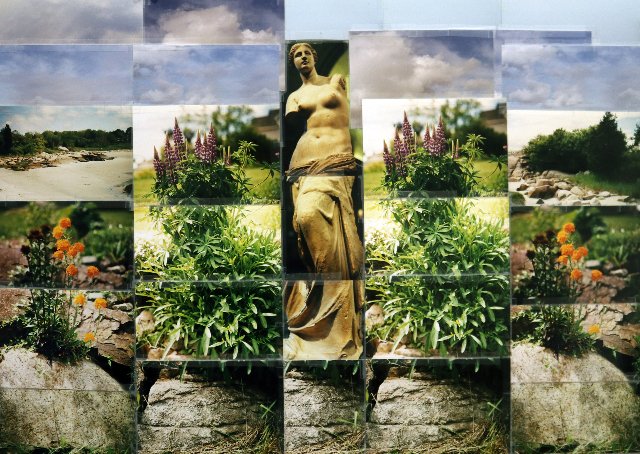 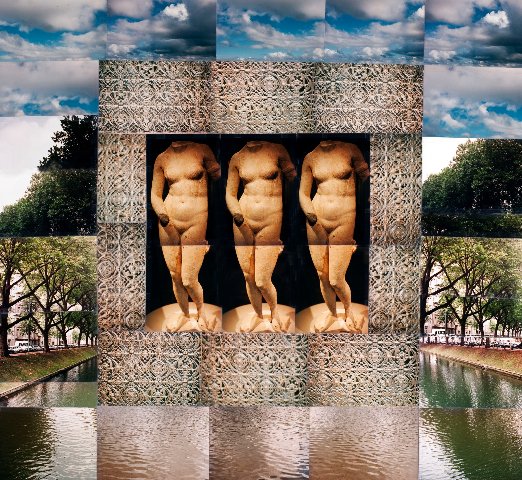 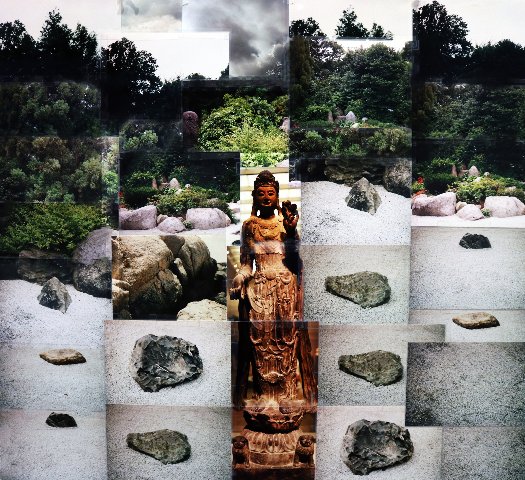 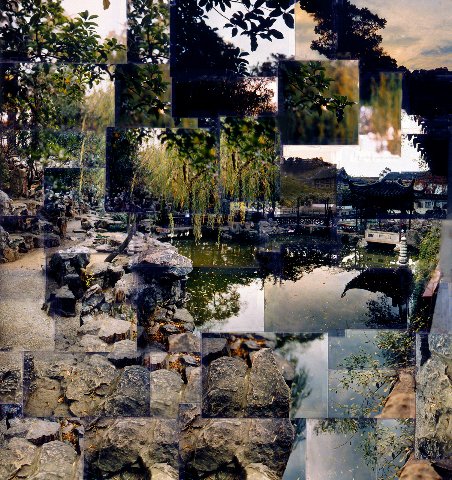 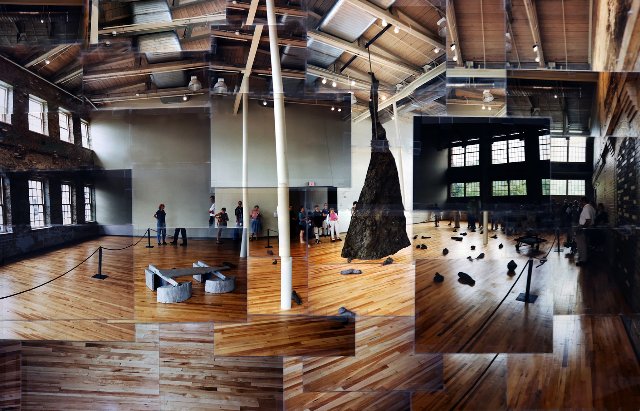 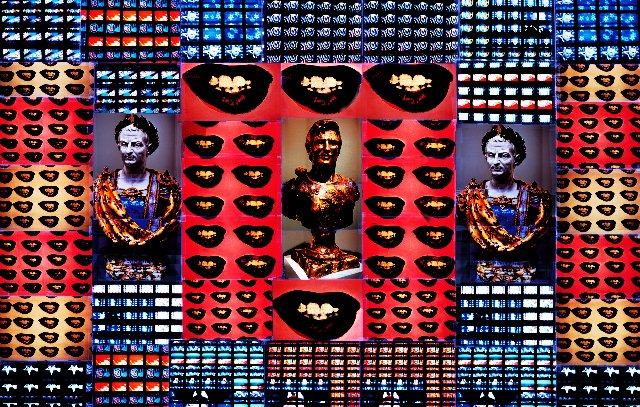 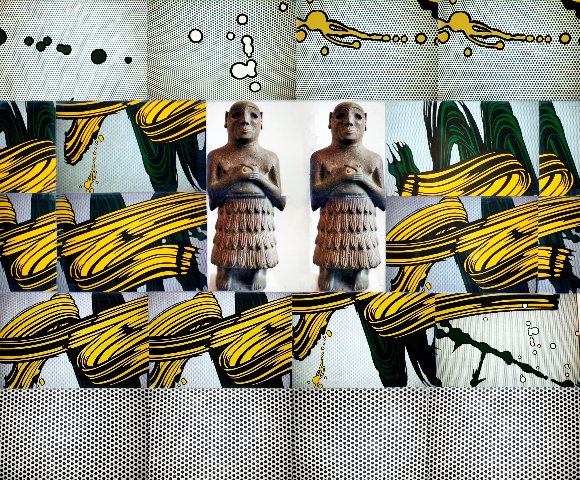 Charles Giuliano Photo Collages
Then and Now from Analog to Digital

In August, 2018 Arthur DeBow curated my retrospective Heads and Tales. It included 40, 13 x 19” digital images. They were taken on assignment since the 1970s covering the arts for Boston based publications. The vintage photographs included many now deceased jazz, rock and blues performers, artists, and actors.

An issue emerged of how to treat the windows of the storefront, Gallery 51, in North Adams. The space is programmed by Massachusetts College of Liberal Arts.

For curb appeal I suggested a couple of blowups. Beck’s Printing in North Adams created digital images on canvas of the Rolling Stones and Sting.

Not long after three more large canvas pieces were created for a three man show, Amigos, which I curated for the gallery of the loft/ studio Eclipse Mill. My consigliore, Robert Henriquez, also worked with Beck’s to create large format images for the show.

When I began to free lance, after several years as jazz and rock critic for the daily Boston Herald Traveler, there was a need to illustrate my reviews. Previously, I would be assigned a staff photographer but now I was on my own.

The editor of The Boston Ledger hand-rolled film which was distributed to reporters. Each week we brought it in for processing. Frames were printed for publication and we were given back the nregatives.

Eventually, I took a darkroom class with Jim Haberman. He taught me how to push process 400 ASA Tri X black and white negative film. In nightclubs I shot with available light at 800 and 1600 ASA. In development the film was pushed one or two stops. The resultant prints were grainy but adequate for newspaper and magazine reproduction.

To teach art history I learned to hand roll color positive film and develop with the E-6 process. A trip to Paris and The Louvre, for example, might entail a hundred rolls of film. That evolved into an extensive library filling a number of file cabinets.

Engagement in photography, initially for journalism and teaching, led to fine arts applications.

In the 1980s I collaged black and white prints. An installation “Riders of the Storm,” at Gallery 11 on Boston’s Newbury Street, entailed a conceptual approach to visiting the grave of Jim Morrison.

There was a lapse from this work which resumed when Astrid and I spent a week in Shanghai in 1997. I shot all formats of film including color prints. These I began to assemble into panoramas using transparent tape.

One of the first collages from this new series was a view of an ancient Chinese garden. Last summer I experimented by having it enlarged and printed on canvas. It was one of five works included in two exhibitions, at Gallery 51 and Eclipse Mill Gallery, both in North Adams.

Bill Riley responded to these new large images and invited me to show at Real Eyes Gallery. This project includes three of the 2018 collages and ten new ones. Produced by Beck’s Printing they are up to five feet wide. Even at that scale the color and resolution is remarkable.

From the 1980s through about 2000 there were many collages created using analog commercial prints and tape. I ordered double sets of prints in order to flesh out and square off collages into rectangles. Going back to Alberti there was the notion that a painting is a vedute or view through the rectangle of a window frame. That’s the convention of visual thinking since the Renaissance. For as show at Gallery 11 I dubbed the images as Transvedutes.

Achieving a semblance of nature through a number of individual prints, however, entails deception and visual alchemy. The craft that evolved entailed mosaics, with prints as tesserae, as well as cubism, futurism and surrealism.

There emerged a polarity between naturalistic panoramas of iconic sites and structures. The other body of work entailed imagination and invention. In some instances antique sculptures are returned to nature. More inventive collages make something new and evocative by the reconfiguration of elements.

That led to photographing and stock piling elements of nature; sky and water, flowers, fruits and vegetables, or sculptures in museums. Many compositions developed with a central object or group surrounded by decorative borders. This nesting may equate to elements of geometric abstraction. The notion is to think of the box as well as outside it.

For this exhibition, as well as an ongoing legacy project, I have been photographing, tweaking with Photoshop, and printing much of this material. Over the past couple of months, through daily activity, that has resulted in a couple hundred, 13x19” prints on premium luster, Epson paper. They have been created with a desktop printer.

Two binders of this material, one landscapes, and the other surreal collages are available for visitors to the exhibition. They provide a sense of the range of the work. This archival work will resume after the exhibition. Eventually, all of the material will be available online through a pending website development.

This project has also been a process of revisiting the many sites and experiences that Astrid and I shared in the past 26 years. She is an element in a number of the collages. One of these “Homage to Hopper: View from the Frontenac” is on view in the exhibition. It evokes vivid memories of a visit to Quebec City.

On a formal level the work is displayed on gallery walls to be viewed by friends and strangers. They must exist on their own terms as visual objects. As their maker, however, the collages have passed through me and represent our lives individually and together.

Making collages ended with the switch from analog to digital photography. So this work is finite and belongs to a niche in time. It evokes the theory of Walter Benjamin in his 1935 essay “The Work Art in an Age of Mechanical Reproduction.” Anticipating deconstruction, and demise of the cult of originality, he suggested that there are enough images in the world for artists to work with. He predicted that manufactured images and objects would supplant hand made ones.

Elements of Benjamin’s thinking inform this project. What’s contemporary about this is making new work from old work. Indeed, from analog to digital and beyond.