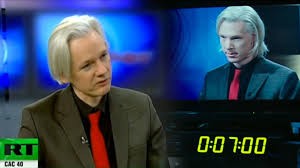 Julian Assange on the silver screen. 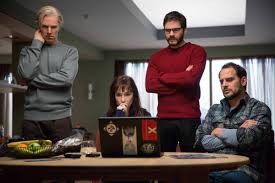 A tense moment in the film.

“The Fifth Estate” is a disappointing cyber suspense thriller based on the real life escapades of WikiLeaks founder Julian Assange. Unless you’ve been living in a cave for the last five years, Australian Julian Assange is the founder of WikiLeaks, an organization responsible for leaking hundreds of thousands of secret government files and diplomatic cables received from whistle-blowers around the world. The most damaging, and the most embarrassing, for the United States, have been the files provided by American Army private Bradley Manning to WikiLeaks.

When the story hit simultaneously on the headlines of the New York Times, The Guardian of London, and Der Speigel in Berlin (a strategy insisted upon by Assange), the power of the internet with its ability to instantly reach millions was ratified.

WikiLeaks’ ability to provide the most private and sensitive of government communications to anyone with a computer, sets in motion a series of damage control strategies by the United States and other governments determined to track down and shut down their operations.

On the upside: The acting is splendid. The performances are first rate, with a possible Oscar nomination in 2014 for Benedict Cumberbatch for his eerily accurate portrayal of mysterious, conflicted, and idiosyncratic computer genius-with-an-obsession, Julian Assange. Daniel Bruhl, a multi-lingual German actor, brings an intensity tempered with restraint to his role of Daniel, Assange’s loyal number two man in the WikiLeaks organization. Bruhl could be in the mix for a Supporting Oscar nomination come 2014, despite the movie’s mixed reviews if the early buzz for the film continues to grow.

Solid performances also come from David Thewlis, as the ethically challenged editor of The Guardian of London newspaper. But, Laura Linney and Stanley Tucci are wasted in cameo roles far below their true talent level.

On the downside: “The Fifth Estate’s” creative team led by American director Bill Condon (Twilight Sagas: Breaking Dawn, Parts 1 & 2, Dreamgirls, Kinsey) and screen writer and adaptor Josh Singer, have all of the components of a story just as compelling as “All the President’s Men”, but choose to tell their story in a way that will, no doubt, appeal to a growing number of young hackers, eager and anxious to show off their ability to hack without consequences (just like the characters in the film). The movie is constantly filled with computer screens displaying data and messages, TV images of actual foreign correspondent’s reporting their actual beats; all done with a heightened sense of urgency in “quick cuts” editing style. It’s a total exercise and bombardment of information overload for the eyes and ears. The result becomes “…a failure to communicate”, to quote actor Strother Martin in “Cool Hand Luke”; making it’s too easy to disconnect from the story. Not a good sign when one is dealing with a suspense-thriller.

The irony of “The Fifth Estate”, the film about Assange’s WikiLeaks cabal, of perhaps a half a dozen people, is that it took over three hundred individuals (count the credits at the end if you can wait that long) to make the movie of his story.