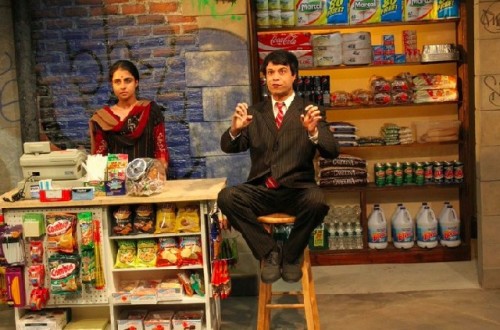 Once upon a time, they were brother and sister, and then... Mahira Kakkar and Debargo Sanyai inhabit their roles. 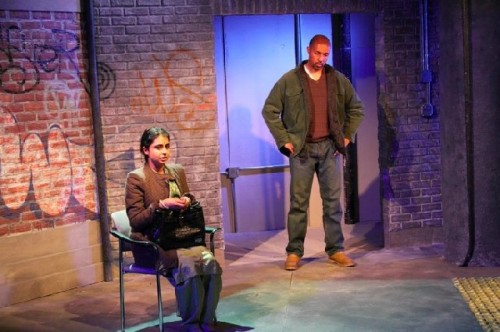 Nirmala and Joe in the hospital room where a husband is being kept alive on support. Joe played by Dion Graham is a damaged man moving toward the light. Graham plays him without resentment and emerging as a full man. 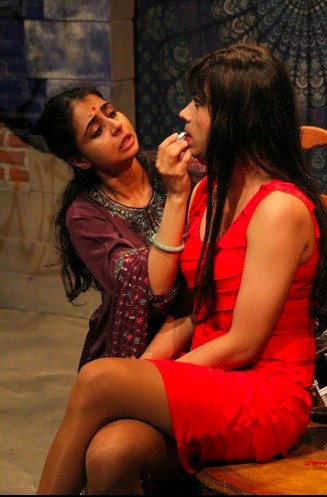 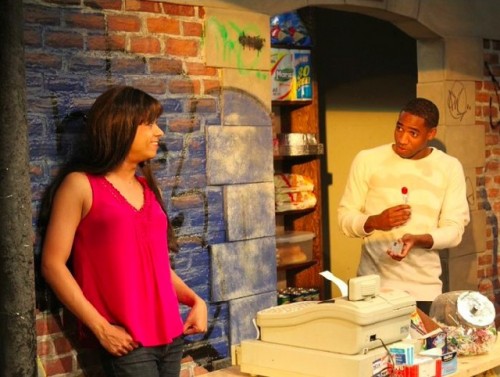 Indira and Devaun troll. While traditional images of the young African American male make you want to say, "Stop," Devaun played by Maruice Williams is real and so much larger than the stereotype to which we react. 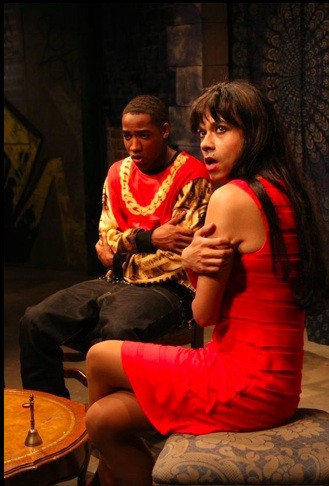 Indira Explains her Mythic Body. It seems improbable that Devaun will buy in but he does and the rest is left to our imagination.

The set is a curved brick wall: a home, a shop, another home, the backdrop for an ICU ward and a subway car.  Director Daniella Topol brings the play to life.

A pair of African American boys, Devaun and Jeron, are not thinking about crime, petty or otherwise, unless it is the crime that we as a society are perpetrating on the air and seas around us.  These young men are obsessed with how to dispose of garbage to save the planet until an older man comes along and pats Devaun's behind.  'Pervert' the young men exclaim as one and decide to plaster the neighborhood walls with reports of the man's transgressions and warnings about what he might do.

For doing this, they become New York's new heros for a day.  Everyone sees them on television, not handcuffed but rather crowned by the Mayor. They have identified an outed a man who is roaming the city pricking people's butts with a pin.  How likely is this scenario?  I have seen it daily in the young boys I teach.  Many of them are as interested in the world around them as any pampered Park Avenue kid with plenty of money and time to think about global issues.

Cori Thomas has drawn Devaun with a dyslexic's twist of words.  He also has the brilliant promotional ideas for the causes he and his friend Jeron both want to adopt.

Jeron can spell and also create signs.  Played brilliantly by Maurice Williams and Carter Redwood, they conquer the universe.  Well, New York, which often feels like it.

Their cause takes them to an Indian bodega, where the beautiful proprietress is being assisted by her brother mid-transformation to a sister.  At first Nirmala, whose hated husband has been languishing in a vegetative state for three years after being shot in their shop, tries to dissuade Ishan from becoming Indira.

But nothing will stop him/her.  In a brilliant turn by Debargo Sanyai, Indira emerges, touching and somehow satisfied by the transformation.  Nothing is cheap about the handling of gender change.  We can only feel sympathy for the struggle of one human to become what she really feels she is.

Wide-eyed Mahira Kakkar, playing Nirmala, is encouraged to 'date' a garbage man who come to the shop, Joe. Dion Graham is also drawn against stereotype, an African American man who lives in confusion after being abandoned by his wife. He is responsible and at last open to a new relationship arranged without charge by Indira in her new self-assigned role as matchmaker.

Devaun, posting anti-pervert signs in the shop, falls for Indira.  The prospect of a macho African American boy falling for a transgender female in transition is absolutely transfixing.  To find out what happens, go and see this terrific play.  Sets, costumes, lighting, everything works.  A real treat.