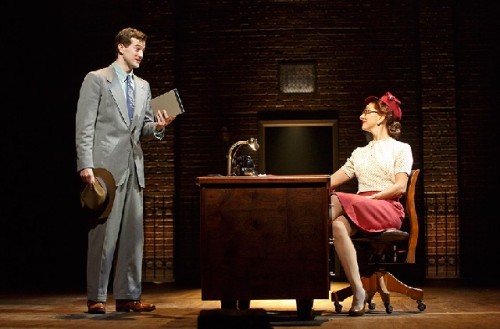 A world premiere through November 2. 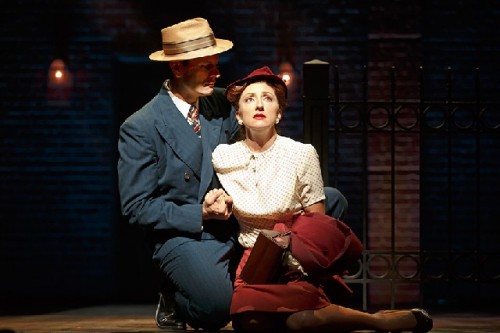 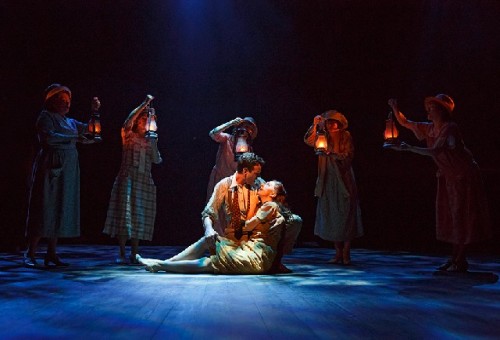 At the Old Globe in San Diego.

Life is a journey and every journey has a story to tell. The musical fable now on the stage of the Donald and Darlene Shiley theatre is the new musical “Bright Star”, co-written and composed by Steve Martin and Edie Brickell, and deftly directed by Walter Bobbie.

In “Bright Star” Martin and Brickell take us back to a time when Americans lived in a kinder and gentler society. One where Norman Rockwell drawings were the mirror of who and what we were; when rural America held County Fairs, church socials, and actually knew their neighbors no matter how far they lived from one another.

“Bright Star” is a gentle story set in the Blue Ridge Mountains of Thomas Wolfe country, Asheville, North Carolina. It tells the beguiling story of Billy Cane (A.J. Shively), a young southern soldier, who has just come home from WW II, harboring a passion for writing and a desire to be become another Thomas Wolfe. He meets Alice Murphy (Carmen Cusack), the brilliant, but prickly, editor of a southern literary journal and together they discover a powerful secret that alters their lives forever.

The story flashes forward and backward from 1923 to 1945. It’s also a tale about the timeless trans-formative power of love and hope despite what trials and tribulations life throws at us. It’s not all peaches and cream down south, so it has some dark moments as well. However, no spoiler alert here.

The cast, featuring eleven speaking, and or singing roles is led by Carmen Cusack as Alice, in a sensitive and winning performance; one steeped in the haunting lyrics delivered by a voice that has seen and endured pain. Cusack’s, husky, smoky delivery is mesmerizing as a young Alice and is commanding as the older Alice the editor of the Literary Southern Journal.

Equally appealing, is Wayne Allen Wilcox as Jimmy Ray, Alice’s erstwhile lover. Their on- stage chemistry produces nice moments in the numbers “A Night Like This” and “I Had a Vision”. A. J. Shively as Billy, the character that sets in motion the story of Alice, Jimmy Ray and Billy scores with his numbers “Bright Star”, “Sun’s Gonna Shine”, and in his duet“ Always Will”, with lovely Hannah Elless portraying Margo Crawford as his sweetheart. Libby Winters as Dora Murphy, Stephen Lee Anderson as Daddy Murphy, Patti Cohenour as Mama Murphy, and Stephen Bogardus as Daddy Cane, provide solid support.

Wayne Duvall as Mayor Josiah Dobbs, gets his proper due during the curtain call much to the delight of the audience and Duvall himself; no more said on this. Jeff Hiller as Daryl Ames, the general factotum at the literary journal and Kate Loprest as Lucy Grant an assistant, provide most of the comedy moments in the production.
The nine member ensemble company who sing and dance under the baton of Rob Berman and the choreography of Josh Rhodes includes: Allison Briner, Max Chernin, Leah Horowitz, Joe Jung, Lulu Lloyd, Ashley Robinson, Greg Roderick, Sarah Jane Shanks, and Scott Wakefield who immeasurably enrich the overall musical experience of the production.

When it comes to the technical credits of a production, the Globe has few equals. “Bright Star” is dominated by the set design and visuals of award-winning and Theatre Hall of Fame Set Designer Eugene Lee whose mobile set pieces and wagons, house both scenes for the actors and provides a “home base” for the musicians who appear on-stage throughout the production. Lighting Designer Japhy Weideman adds to the dreamy overall quality of the story with his mood-enhancing shafts of light. Even more creative is the activation of the upstage drop curtain, which has been cut to suggest a silhouette of a mountain range beyond the town. The scenes, when splashed with an evening lighting effect, produce a stunning visual effect.

What separates, at least for me, “Bright Star” from the general run-of-the-mill musicals by today’s young composer/lyricist/ playwrights is the fresh choices of music, instruments, and style of the production. Martin and Brickell both work as performers in alt-rock, and bluegrass. Martin has his own bluegrass band – the Steep Canyon Rangers – and banjo-featured renditions and instrumentals are a big part of their success, so it comes as no surprise that bluegrass and the banjo orchestrations are front and center in this heart-warming production.

It’s the music and the orchestrations that propel the story forward, taking the audience along with it. What Aaron Copland did for “American” music with “Appalachian Spring” and “Rodeo”, Martin and Brickell do for Bluegrass, thanks to some wonderfully creative orchestrations from August Eriksmoen, and musical director Rob Berman. Walter Bobbie was a wise choice as the director. He brings many clever directorial touches to this impressive production.

Globe Artistic Director Barry Edelstein is on a roll when it comes to selecting and mounting winning productions. First, “The Winter’s Tale now to “Bright Star”. Let the good times roll. The production is not only a love valentine to aficionados of bluegrass music, it’s an entertaining evening of musical theatre, despite, perhaps, a song or two too many, but nonetheless is a new musical whose time has come. Don’t Miss It!.