The Last Goodbye at Old Globe 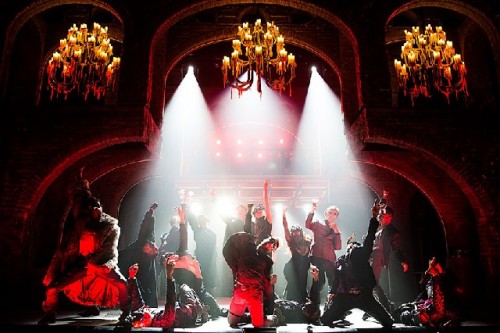 The cast of The Last Goodbye. Photos by Matthew Murphy 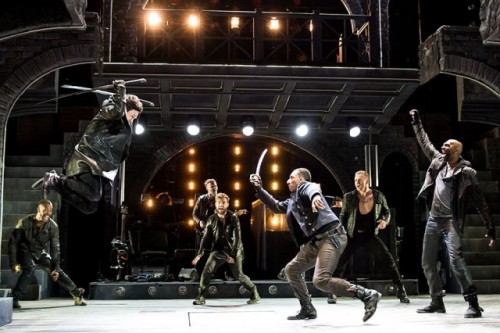 A fight scene in basic black. 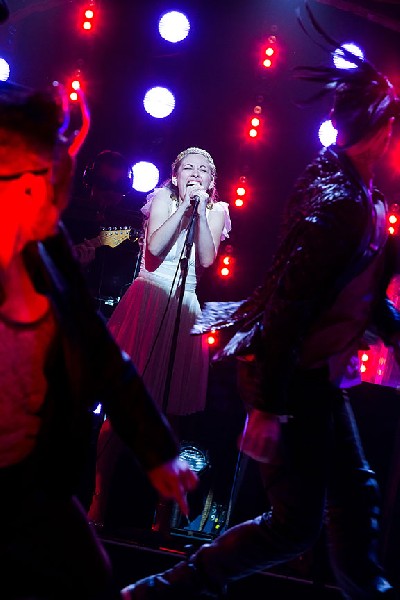 Rock music set to classic stories can be risky and tricky to pull off.  Andrew Lloyd Weber and Tim Rice’s winning high-octane production  “Jesus Christ Superstar” comes to mind as a show that beat the odds.  It is a production that successfully combined the unimpeachable Bible as source material along with the creative muses of Weber and Rice.

In the English-speaking world, however, Shakespeare as source material sets into motion the guardians of the Bard’s work against those who would mess with his brilliant iambic pentameter text.  If there is a sniff in the air of someone who wants to change the basic elements of his many works, alarm bells go off.

“Romeo and Juliet” is arguably the world’s greatest romantic tragedy ever written.  One had better have a darn good reason for tweaking and/or setting the story to music.  Having said that, I honestly believe the gifted trio of Leonard Bernstein, Stephen Sondheim, and Arthur Laurents had solid reasons to brilliantly give the world a new and relevant Romeo and Juliet story set to music –  “West Side Story”.

“The Last Goodbye” had its world premiere at the 2010 Williamstown Theatre Festival, and since then has been a work in progress undergoing one “musical autopsy” after another in an effort to ensure that the work will find a friendly regional theatre stage to call home for awhile.

This hybrid version of the Romeo and Juliet story launches the Barry Edelstein artistic directorship era at the Old Globe.  His track record in New York, the Public Theatre, and other first tier regional theatres is impressive and bodes well for audiences of San Diego’s Old Globe Theatre.

In this Old Globe production conceived and adapted by Michael Kimmel, director Alex Timbers incorporates the music and lyrics of the late rock singer-songwriter Jeff Buckley to tell the story of literature’s most famous star-crossed lovers. Director Timbers has mounted a production that appears to target a younger audience with actors who speak the text with American accents (not necessarily a bad decision that is if the younger audience can tear their eyes away from their ubiquitous and addictive I-Phones long enough to become engaged).

Timbers’ sometimes, inspired directorial choices allow Buckley’s vernacular lyrics to help move the famous love story along for a more contemporary audience.  I’m not quite sure that screeching electric guitars, however, are the best instruments of choice when it comes to a re-telling of a classic, iconic, romantic tragedy.  The over fifty crowd favors the more traditional version as penned by the Bard some four hundred years ago. But, then again, beauty is always in the eye of the beholder.

The production projects a sense of ambivalence when it comes to the intent and vision of director Timbers as to which style he wants his audience to accept. Are we being treated to a modern musical in style and substance or are we watching a Shakespearean classic drama interspersed with music and lyrics?  The result being that’s it’s neither fish nor fowl. Gorgeously mounted and staged, the show is a visual feast for the eyes in the departments of Set Design by Christopher Barreca, and Lighting Design by Justin Townsend.

During the Renaissance the competitive spirit and pride of Italy’s many city-states was colorful and ferocious. In Act 1, the characters all appear to look and dress alike –mainly in black. It’s the new choice of costumers these days.  Some charcters are costumed as a mixed bag of modern and hybrid costumes by designer Jennifer Moeller.  While the color-blind casting concerning the houses of Montague and Capulet, with their many cousins and family members is commendable, audience eyes tend roam in the early scenes as they try to identify the principle players, along with who belongs to whom, which tends to obscure rather than bring clarity to the story and on-stage action.

Act II, after all the tweaking, trimming, slicing and dicing has been done, is the more powerful and the more emotion-packed of the two acts. The death scene in the family vault is especially affecting and poignant, and underscores the folly of division and revenge as a way of life.  Fight Director, Kate Waters can take a bow for her creative and energetic staging of all the swordplay and fight scenes.  Ditto for Sonya Tayeh’s choreography.

“The Last Goodbye” features a cast of nineteen talented performers led by Jay Armstrong Johnson and Talisa Friedman as the star-crossed lovers. Johnson has the vocal range and acting chops required for Romeo but his falsetto is strongly tested by Buckley’s music (Roy Orbison and David Gates may have thrived on falsetto performances, but neither had to prove themselves as actors).

Friedman has a lovely voice and her harmony duets with Johnson are tender and poignant.  She may not look fourteen (Juliet’s alleged age), but then there are only so many Olivia Hussey’s that come along in a generation.

The production is blessed with outstanding support from:  Brandon Gill as Benvolio; Stephen Bogardus as Friar Laurence; Hale Appleman as Mercutio; Jeremy Woodard as Tybalt; Tonye Patano as the Nurse; and Daniel Oreskes as Lord Capulet.

As to whether the “The Last Goodbye” will become a successful stage version other companies might like to produce in the future … well, it’s a little too early to tell.

The Old Globe production currently on the boards may not be my personal favorite as a musical, but one cannot deny the passion and the talent of the actors who are working very hard to make it an evening in the theatre that one will remember.  The production runs through November 3 at the Old Globe’s Donald and Darlene Shiley stage in San Diego.