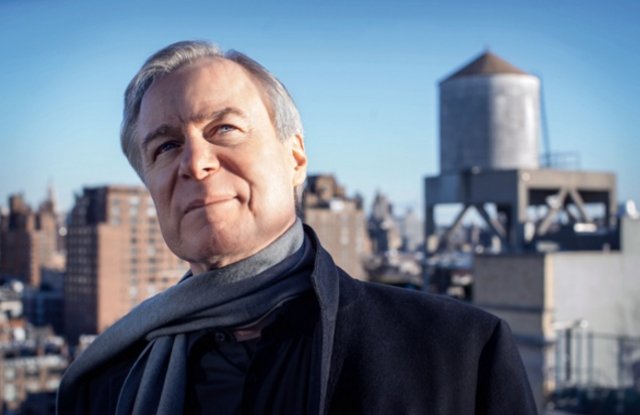 One could not help but notice, walking into David Geffen Hall on Friday, that there were some empty seats. These were more noticeable because they had little envelopes taped to them, presumably gifts for subscribers coming to the first Friday morning program of the 2018 season. However, as this concert started with new music, the conservative types who make the biggest Philharmonic contributions were (as is their wont) late to arrive.  Here, conductor David Robertson opened with a performance of another major work by contemporary composer Louis Andriessen, the Dutch composer whose receipt of the 2016 Kravis Prize for new music has led to an in-depth Philharmonic exploration of his catalogue.

This work was TAO, a one movement piece that forms the central part of a larger work: the Trilogy for the Last Day exploring the transient nature of existence, the measured passage of time and the inevitability of death. It is written for orchestra, four vocal soloists, and a demanding solo part split between the piano, and the koto, a long Japanese zither with nine strings. Although the ideas of TAO are rooted in Asian poetry and philosophy, Andriessen, in a program note, commented that " I have made no attempt to relate to what is known as "music from the Far East" or, even worse, 'world music.'"

The text is in both Chinese and Japanese, drawing on a verse from the Tao-te-Ching by Lao Tzu and a much more recent Japanese poem.Stabs of percussion, sliding pentatonic progressions and a series of jaw-clenching chords played on the high end of the piano keyboard established tension, against which the four amplified singers crooned the syllables of the Lao Tzu text. The second part of the work featured Tomoko Mukaiyama doing double duty on Western and Eastern instruments as she sang the sharp, bitter and pessimistic Japanese text: a 1930 poem called "Knife-Whetter."

The latecomers, who seated themselves as TAO was applauded, liked the Rachmaninoff that followed a lot better. The Rhapsody on a Theme by Paganini takes as its principle idea the 24th Caprice from that violinist, and uses it as the launch point for one of Serge Rachmaninoff's most beguiling works. The ever dour Rachmaninoff ties that diabolically difficult theme to the grim descending figure of the Dies Irae, leading the listener on a merry subterranean tour of the subconscious. It's not quite a concerto, but it offers the same challenges and rewards as the composer's other four efforts in that genre.

Ohlsson is an excellent guide to these depths. He and his piano wove nimbly around the orchestra. Staccato passages were tossed off with little movement and even the most fiendish moments, requiring crossed hands, "third hand" melodic runs (done using the thumbs) ad pernicious rhythms spilled from the orchestra. The centerpiece of the performance was the eighteenth variation, in which the Dies Irae is somehow altered into a searching and soaring love melody, carried into a wave of post-Romantic ecstasy by the full force of the orchestra.

The Second Symphony by Jean Sibelius is also treacherous, composed of tiny musical motifs that have to be stated clearly at the outset of each movement for the larger structure to take shape. Central to this is the juddering rhythm for strings that starts the first movement. Here the change in seating that the orchestra has adopted this year paid a dividend as the cellos were heard with prominent voice. they were answered by dancing themes from the woodwinds and a surge of upward nobility from the horns and heavy brass.

And so it continued, from the plucked introduction to the second movement to the triumphant, surging trumpet-calls that cap the fourth. This was not Sibelius at the highest level, where the force and clarity of the composer's vision come out with overwhelming force. Like the Rachmaninoff, this was the Philharmonic firmly in its crowd-pleasing mode, playing the kind of music whose presence on the program allows important and unjustly ignored original voices like Mr. Andriessen's, a chance to be heard. (Reprinted by permission from Superconductor).