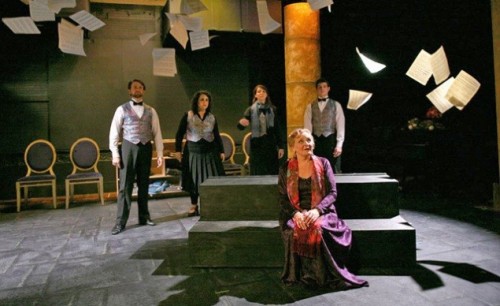 The production of The Old Mezzo at the Berkshire Museum.

Playwright Susan Dworkin listens to a question from the audience. Giuliano photos. 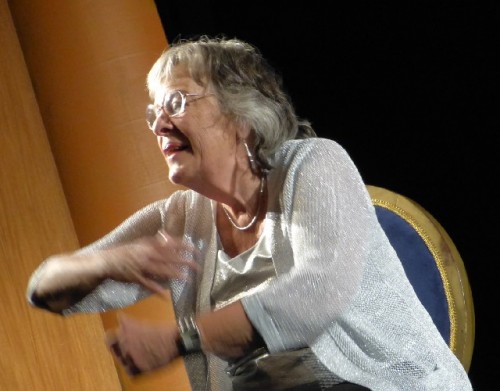 Dworkin is based in the Berkshires. 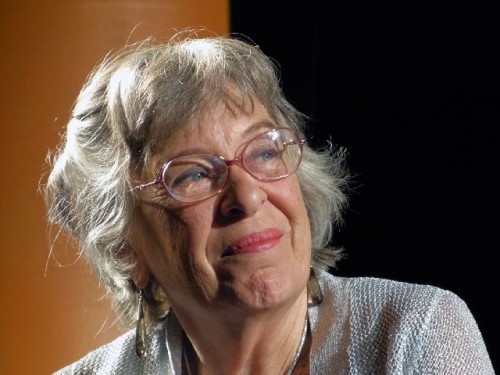 She was a founding editor and writer for Ms Magazine. 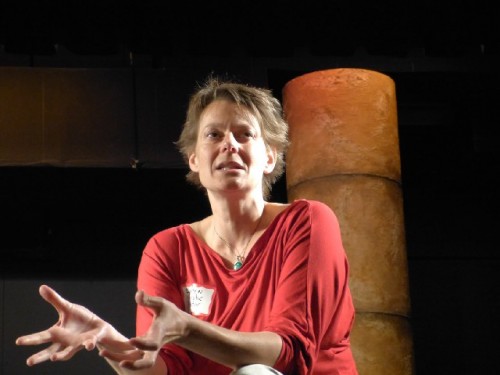 Producing theatre on a shoestring budget. 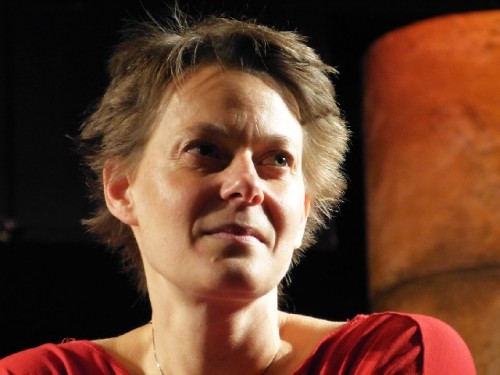 Some 25% of ticket sales are donated to charities that benefit women and girls.

There were evident growing pains as a very young, feminist company, WAM (Women's Action Movement) Theatre, took on the daunting challenge of a world premiere of The Old Mezzo, by the Berkshire based Susan Dworkin, a founding writer and editor of Ms Magazine.

This is a game but uneven production directed by WAM Theatre co founder, Kristen van Ginhoven. Yet again, she proves to be plucky and ambitious in making the most of limited resources. Even with a shoestring budget WAM continues its mandate to donate 25% of ticket sales to a charity that supports women. In this case Shout Out Loud Productions.

While still in the early stages of development WAM Theatre has established itself as a Berkshire based, emerging, theatre company with enormous potential.

During the Sunday matinee, yesterday, there were glimmerings of artistic excellence, particularly in the central performance of the veteran Eileen Schuyler as The Old Mezzo. The script of Dworkin, however, set an impossible task of demanding that the middle aged actress portray her life story in varying stages of development starting as an 11-year-old girl. She got hit and miss support from an enthusiastic but uneven cast.

In the lively post performance discussion with the audience Schuyler was frank in disclosing her misgivings about portraying such a broad range of age. She aptly noted that it is  doable for an actor to portray an older character, but terrifying, to play a younger one.

Dworkin was asked about further “tweaking” of the script. Apparently, there was a lot of that by the director and cast which eventually had to be frozen to create a manageable performance. One feels that the play is still a work in progress.  Dworkin described it as now out of her hands and having a life of its own through a director and cast.

Perhaps the project at this point was overreaching. It really cries out for a larger cast, including a juvenile and young woman to cover that age transition, and, arguably, more augmentation of the crucial musical elements. The cast did surprisingly well in a couple of choral elements at the end of the play. One of which was a curtain call. Bravo.

The production took advantage of what was available, including a grand piano loaned by the museum which wasn’t played, but provided an essential plot point and prop. The stage of the museum proves to be suitable for theatre and is providing a long term home for WAM and other regional companies.

Van Ginhoven widened the stage, so to speak, by having the actors enter from the doors of the auditorium walking through the audience. This device was repeated later. With a tiny budget for a set she opted for two mobile columns which signified both the classicism of a fictive European city, as well as, suggestions of opera staging. The rest of the set mostly entailed chairs as props and some portable, all purpose stairs.

The plot, which at this point needs more development, starts with the funeral of a famous woman conductor. A room of student singers, the choir for the funeral, are awaiting the arrival of their instructor/ diva Alyssa.

They are gathered around a radio listening to their choral work in a delayed broadcast of the funeral mass. There is a discussion of how the entire music world had shown up for the event but nobody recalls seeing Alyssa.

For good reason as the plot advances. It seems that there was bad blood between the diva and conductor dating back to a period of war, horror, and Fascism. The period and nation remain non specific. Dworkin melds ersatz fact and fiction creating a larger context for the struggle of the arts under censorship and genocide.

This is big stuff as Alyssa creates an exercise taking her students back through her own transition from girl/ woman/ artist/ diva/ political activist. Those are a lot of hurdles for the performers and audience to navigate. The company negotiates them with varying degrees of success.

Schuyler has her most compelling supporter and accompanist in the remarkable and always intriguing Ryan Winkles. We have always admired his many different roles with Shakespeare & Company. In this context he brings great depth as the music master, Johannes, a tyrant who initially refuses to train his young daughter. He has another persona as Joe the student of Alyssa.

The dual role of Mother/ Marcelle, and student Marcy, is less adeptly conveyed by Erin Ouellette who has compelling moments but isn’t in control of the range of transitions in Dworkin’s text. It gets murky when her promiscuity undermines the security of the family. Denounced by her husband as a whore she counters that flirting with their most dangerous enemies was a means of neutralizing them.

Elizabeth Donnelly has equally challenging transitions first as Sally, the student, then as a spoiled, untalented, rich girl who through political influence has joined the chorus. She is denounced by Alyssa who refuses to perform in the same company with such dreadful talent. Forced out of the group, under conditions of war with men at the front, she gradually thrives and reaches her mark as an eventually brilliant and successful conductor.

It is her eventual funeral which Alyssa refuses to attend.

During the talk back Dworkin discussed how conditions of war opened up opportunities for women in the arts as well as young, untested musicians. They were the equivalent of the many Rosie the Riveters who “manned” positions in symphony orchestras. Of course, post war, those opportunities, both in factories and the arts, dried up when men returned from war. It was through the efforts of Dworkin, and other pioneering feminists of her generation, that the playing field, as we now know it, was later leveled.

In that context the collaboration between Dworkin and van Ginhoven spans generations with stunning resonance.

Rylan Morsbach is pressed into a gaggle of minor supporting roles from an American jazz performer, soldier/ liberator of the city, piano tuner, lover, etc. It’s a lot to take on and Morsbach did his best to maintain momentum.

While there were well crafted moments it was a bit manic to keep up with all of the twists and turns.

Along the way we learned that, yes, war is hell. And that art must mirror life and rise above circumstances. In times of crisis and despair the arts are crucial to sustaining our essential humanity.

One thinks of the music composed and performed in the death camps of Nazi Germany; or the string quartet calmly performing on the deck of the sinking Titanic.

Those of my generation have fading memories of WWII and the wars that followed. The audience raised the question of what a play like The Old Mezzo might mean to a younger audience? There is always war, somewhere, currently far away, but on the news each evening.

Yet again we were reminded of Theodore W. Adorno who said  "To write a poem after Auschwitz is barbaric.”