The Obama Portraits at the MFA

On View Through October 30 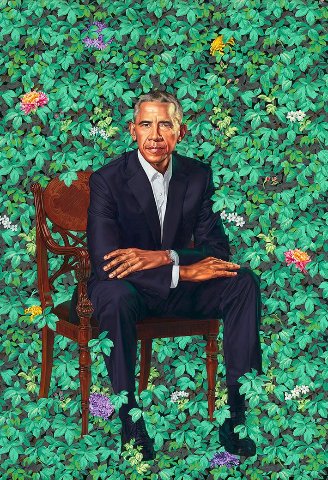 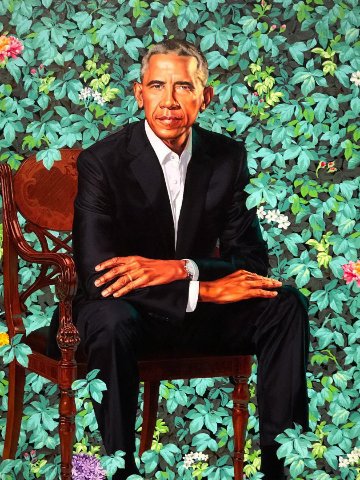 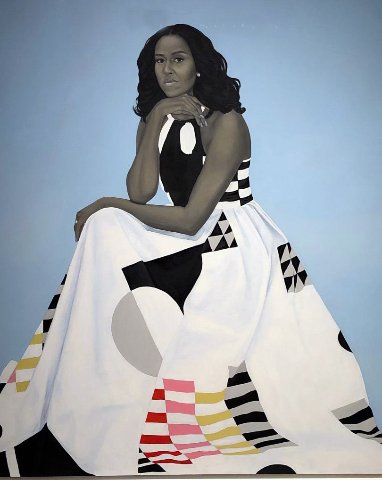 During a recent visit to the Museum of Fine Arts Boston we attempted to gain entrance to a gallery exhibiting the official Obama portraits commissioned by the Smithsonian’s National Portrait Gallery in Washington D.C.

Boston is the last stop of “The Obama Portraits Tour” which after five museums ends on October 30.

The guard directed us to the member’s desk assuring us that there would be no problem gaining admission.

We received timed tickets, a strategy for crowd control, but found that to be a stretch. The gallery was somewhat better than moderately full. There was ample room to circulate and visitors took turns posing in front of the official presidential portraits or snapped selfies.

In general, a portrait is a category of art in which there is something wrong with the nose.

Surveying all of art history rarely does the quality and interest of a portrait transcend the individual it depicts.

By nature, portraits primarily were commissioned by the rich and famous. By definition laudatory, as such, more often than not they are stiff, stodgy and boring. There is a short list of genres and artists that exceed the norm.

The MFA, for example, has such stellar works as Gilbert Stuart’s Athenaeum Portraits of George and Martha Washington. Stuart did many more but Boston has the primo ones shared with the National Portrait Gallery.

Consider John Singer Sargent’s “Daughters of Edward D. Boit” a stunner. Or wander over to the Greek and Roman galleries and find the terra cotta head of a patrician. The museum’s portrait of Prince Ank Haf is arguably the only true portrait of Old Kingdom Egyptian Art.

These are magnificent portraits and exceptional works of art.

Andy Warhol created galvanic silk screen iconic images of Marilyn Monroe, Elizabeth Taylor and other celebrities. During a fallow period in his career the artist sold his soul to the devil for filthy lucre. He cranked out commissioned portraits of the mega rich.

The Whitney Museum mounted a perfectly dreadful exhibition of these enervating images. The formulaic paintings are of interest only to the sitters and their heirs. While a fine Warhol Marilyn commands millions in the secondary market the corporate portraits are worth zilch.

In recent years, double sets of presidents and their wives have been created; one pair to hang in the White House and the other in the National Portrait Gallery.

In the case of the Obama portraits the White House set is fairly standard fare.

For the NPG the commissions took a walk on the wild side. For the first time the paintings are by and of people of color. Kehinde Wiley depicted President Barack Obama and Amy Sherald painted Michelle.

What energizes the Stuart portrait of Washington is the haste with which the sketch was created. Given the president’s schedule he was provided with only one session. That resulted in an intense urgency. As the Buddhist state, first impression best one.

For the Obama portraits the artists worked from photographs. Wiley’s meticulous, labor intensive, precise rendering reveals the difference between photo realism, or copying, compared to working from life. Sherald was given two hours to photograph the first lady in natural daylight.

The public interacting with the works at the MFA appeared to be delighted. There was a jovial, celebratory mood in the gallery. While that may be regarded as positive, for me, the experience was less so.

I know the Obamas only through media but these images were disconnected from the individuals I have come to hold dear intimately and affectionately.

The portraits are more about projections of the style, persona and agendas of the artists. I learned more about them than gaining new insights to the Obamas.

Wiley, while a meticulous craftsman, is campy, self-absorbed and conceptually strident. He has the president sitting in an antique chair set in a background of leafy vegetation and symbolically specific flowers representing Illinois, Kenya and Hawaii. This symbolism will be lost on viewers that included me until I read the press release.

While the painting looks like Obama in a frozen, realist manner the context is absurd. It reminds me of when Annie Leibovitz photographed Whoopi Goldberg in a bathtub of milk.

The Michelle Obama portrait by Amy Sherald is enervatingly bland. She paints in a flat grisaille manner that drains and neutralizes the persona of the sitter. The artist appears to be more interested in the abstract patterns of the gown than delving into the character of the first lady.

Looking long and hard at the work I felt utterly no connection to the first lady. If the Barack portrait was outrageous and over the top his wife was depicted dull as dust.

On line I saw the photo that Sherald worked with. Compare the warmth and naturalistic skin tones of the photo to the manner in which the chroma has been drained from the painting. Ironically, what this work sadly lacks is richer color. The painting needs a transfusion.

Oddly enough, these are not the worst presidential portraits. That distinction belongs to Elaine deKooning’s inept rendering of JFK.  Ugh!