Outsider Voices in an Alien Culture 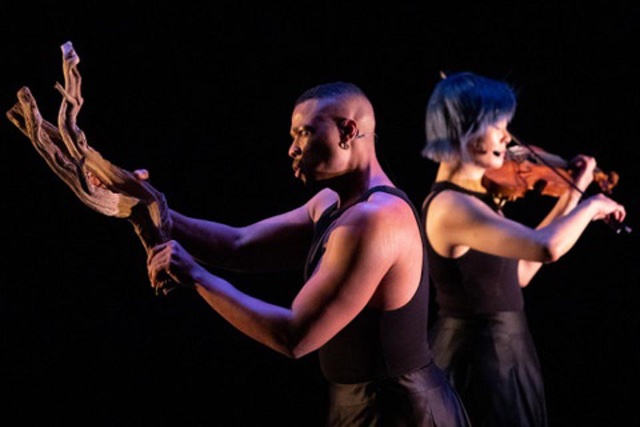 Across a crowded room at the Paris Opera, Jennifer Koh and Davóne Tines looked at each other and realized they had something in common, something that was different from everyone else in the room: their color.

Classical violinist Koh and classical vocalist Tines soon discovered they had a common vision: to reach out to others with their unique perspectives and voices.The University of California, Santa Barbara and ARCO commissioned their collaboration. The Brooklyn Academy of Music’s Next Wave Festival is giving the work, Everything Rises, its New York premiere.

Composer Ken Ueno brings his talents as vocalist, improviser, and sound artist to Everything Rises. His music is inspired by Walt Whitman’s notion that music is inspired by personality. This is a  “person-specific”  work where the intricacies of performance practice are brought into focus in the technical achievements of a specific individual fused with that performer’s aura.

Ueno is an outsider and drawn to sounds that have been exempted or excluded from the traditions of Western  classical music.

The piece opens with Koh, in magnificent red evening dress, watching her own performance, one which earned her first place in the Tchaikovsky competition. For the duration of the program, she will try to coax sounds from her instrument. Yet the tones are often harsh and abrupt.  Angry, or just struggling to find their voice.

Davone Tines enters. He is magisterial, and will move through the evening like a priest in procession. He is looking for his voice, not the beautiful voice that was trained early on for operatic performance. The voice that connects him to his history and to his being, his sense of who he is. He will pick up a symbolic tree branch and nurture it in his arms as he hums and murmurs, reaching for his voice.

The tree is the hanging place for his ancestors, slaves who were lynched and killed by white Southerners, fearful of Blacks'  humanity. Tree branches have until now borne strange fruit, hanged men of color.

The back stories which come forward have emerged from a world which seems to tell everyone’s story but Koh's and Tines'.

Tines predecessor tells the story of Black men hung like strange fruit.  Koh’s mother speaks about immigration from North Korea, which left her without the strength to be a mother.

The stories are in and of themselves moving. Yet they are made even more so as the real characters appear on stage. These stories are true.

Decision-making is no longer made “devoid of a minority perspective,”  a Tines’ expression. Artists of color are taking the stage with their own stories.