The Crucible at Steppenwolf

Miller's Witch Hunt All Too Relevant 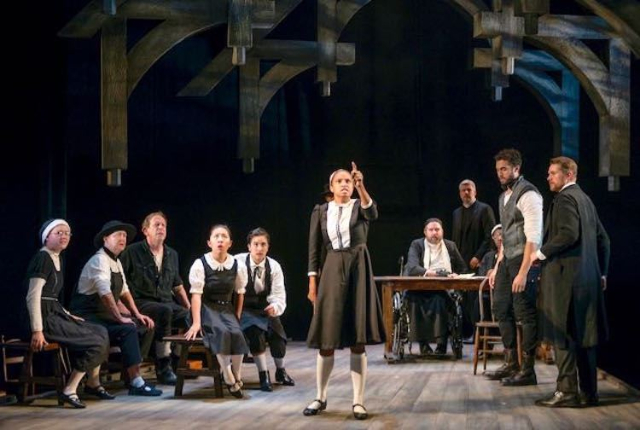 It’s all about the names. Early in The Crucible, set in colonial Salem, young girls caught dancing in the woods name other girls who were involved to save themselves from greater punishment. And late in the play, a brave man falsely accused of consorting with the devil, agrees to confess but will not turn over the paper that bears his confession and signature. “Because it is my name! Because I cannot have another in my life!” he shouts.

Steppenwolf Theatre’s new production of Arthur Miller’s 1952 play, skillfully directed by Jonathan Berry, is a chilling allegory of the McCarthy era’s assault on freedom. Staged for the Steppenwolf for Young Adults series, the play pulls no punches in telling the story of guilt and accusation during the Salem witch trials.

In a prelude to the play, young girls dance wildly to an electrifying percussive beat. Now and then, one calls out. Are some of them naked? Has someone seen them?

In an upstairs bedroom, Reverend Parris (Peter Moore) prays over his daughter Betty (Kristina Valada-Viars). He has caught Betty and his niece Abigail (Naima Hebrail Kidjo) dancing in the woods and now Betty has not moved for hours. The doctor sends a message that there is no medicine for the ailment and Parris should “look to unnatural things.” Parris fears criticism because he doesn’t want to lose his pastorate or his home.

So begins Miller’s version of the Salem witch trials. Parris summons Reverend Hale (Erik Hellman), a specialist on witchcraft. Hale interrogates the girls and other witnesses about consorting with the devil and their spiritual devotion.

John Proctor (Travis A. Knight), a farmer, had a brief affair with Abigail, who continues to flirt with him and demand his attention. Proctor’s relationship with his wife Elizabeth (Valada-Viars) suffers as a result. Elizabeth is falsely accused of witchcraft, as are other women in the community.

The Crucible features some carefully drawn performances and Berry’s direction enhances them and moves the complex action along smoothly. Michael Patrick Thornton as Deputy Governor Danforth conducts the trials with grim determination and a voice of power. Knight as John Proctor is a pillar of strength for as long as he can be. Echaka Agba is a colorful Tituba as well as a serious Judge Hathorne. Hellman is a sincere anti-satanist but sees the truth at the end. Hebrail Kidjo plays Abigail as a determined teenaged temptress.

Arnel Sancianco’s scenic design is a serviceable mixed home and courtroom scene in act one, topped by three steeple-like structures. In act two, the setting explodes into a temple of doom as the black backdrop is raised to reveal chairs swinging from ropes. Kevin O’Donnell’s sound design and original music are particularly effective throughout. Izumi Inaba’s elegant costume theme is a somber black and white.

Arthur Miller is part of my grand quartet of 20th century playwrights, which also includes Eugene O’Neill, Tennessee Williams and Sam Shepard. Miller’s play A View from the Bridge is just completing a run at Goodman Theatre in an innovative staging by Belgian director Ivo van Hove. Court Theatre will stage Miller’s All My Sons in January.

Miller himself suffered from McCarthy-era pressures. Some of his plays and a film were restricted or canceled because of pressure from HUAC (the House UnAmerican Activities Committee) and he was denied a passport in 1954. Later he was convicted for contempt of Congress for refusing to name names for HUAC; that conviction was later overturned. He died in 2005 at 89.

Miller’s notes to his script for The Crucible say that he based his writing on letters and trial records, but changed and combined characters to suit his story. His original script incorporates explanatory notes about characters, their appearance and motivations throughout the drama.