Girl of the Golden West at Metropolitan Opera 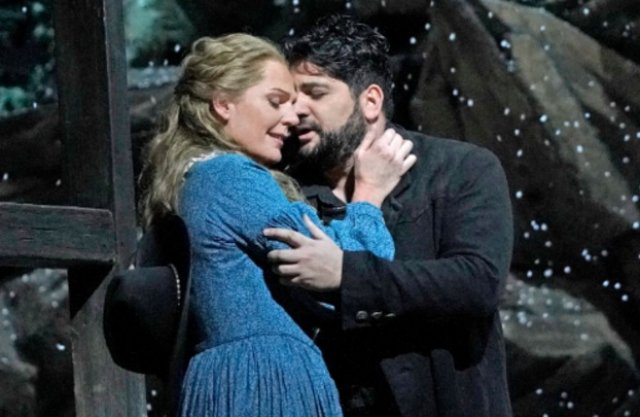 The Girl of the Golden West

It is a hard existence to be a lesser known work from the pen of a great opera composer, and no opera has suffered more cruel jokes than Puccini's La Fanciulla del West ("The Girl of the Golden West.") Since its premiere on the stage of the Metropolitan Opera in 1910, Fanciulla has fought for survival, much like the hardscrabble gold miners that make up the bulk of its colorful cast. The opera returned to the Met this month with a good cast. On Monday night, a performance featuring tenor Yusif Eyvazov and soprano Eva-Maria Westbroek provided a much needed shot of red blood to an anemic fall season.

Although its titular leading lady is denied the glory of a proper aria, Puccini packed this score with great duets. He built Fanciulla in the Wagner mode. Simple melodic ideas flower into complex turns of emotions through development and inversion.. There are themes for Minnie, the bandit Dick Johnson and for the love between the two. The grand sweep of the Sierra Nevada mountains (the opera's setting) is present as well. Less successful: attempts at American folk idiom ("Doo-dah, doo-dah doo-dah day!" is cringe-worthy) and odd, untranslatable words like "Hello!" that pepper the first act and belie this opera's excellent quality.

Puccini wrote the role of the (unfortunately named) Johnson for Enrico Caruso. Here, Eyvazov (singing the second of his two performances in this run--he is scheduled to be replaced by Jonas Kaufmann later in the week) played the gentleman bandit.Vocally, he started the evening in very good shape, and improved from there, singing the tender love duets with Minnie that turn desperate when she learns his true identity. He rose to the challenge of "Chelli mi creda," the tenor's big Act III aria. He also brought personal charisma and a certain down-to-earth swagger to the role.

He was well matched with Westbroek. Tasked with the heroic role of Minnie, the opera's title character, she kept battling the stage directions, which seemed designed to hide her height difference with the tenor. That aside, she made a strong entrance and found her mezzo voce for the Lesson Scene, slow but all-important part of Act I. Her Minnie was bold, brassy and a little bit gormless, juggling the affections of all the miners in the camp and the advances of Sheriff Jack Rance. In the end she walked off with a reformed Johnson, in a gorgeous, nostalgic fade-out that is quite unlike any other opera.

Zeljko Lucic specializes these days in baritone villain roles. His hulking frame brought presence, and a woody baritone was the right color for Rance. He navigated the treacherous head-voice passage in the first act, a part that shoots many a would-be sheriff down before the opera really starts. Best of all was his big confrontation with Minnie at the end of Act II, tense, violent and revealing the ugly brute behind the Sheriff's badge. The poker scene, where he and Westbroek literally gamble for the dying Johnson's life was superb and utterly demented: marriage of Italian high melodrama and sheer vocal power.

Although the stage is often busy, there is no chorus in Fanciulla. Rather, the miners are represented individually and sometimes happen to sing as a collective. Standout supporting singers included Michael Todd Simpson as Sonora, Oren Gradus as the balladeer Jake Wallace (he gets one of the best tunes in the first act) and Matthew Rose as Ashby, the Wells Fargo agent. The individual character of the miners, and each man's relationship with Minnie is key to the denouement of the opera: as she appeals to each of them in turn for mercy, a howling lynch mob finds its quality of mercy.

This is one of the last Met productions from the very end of the era in which excess and realism ruled at the company's shops. (It was originally by Giancarlo del Monaco, whose dad Mario was a famous Dick Johnson.) The deep set of the Polka Saloon still has problematic sight-lines, but the scenes of brawling, flying wooden furniture and at one moment, a daredevil leap from the upper balcony of the set (!) provide excitement and movement. Even better is the Act II set for Minnie's cabin with realistic furniture and snowfall. The audience was patient with the tech crew during the opera's notoriously long intermissions. After all, California wasn't built in a day. (Reprinted by permission from Superconductor).