The Song of the Nightingale 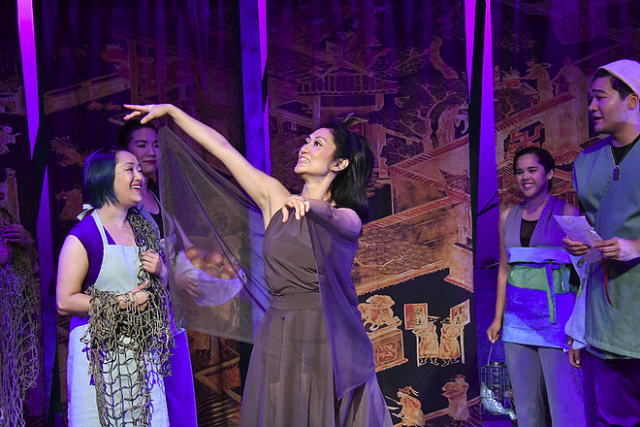 Isabel To as Mei, Pauli Amornkul as Nightingale, Matt Ono as Xiao (foreground). Ji-Yun Kim and Chelsea Wellott as ensemble (rear). All photos by Jay Yamada. 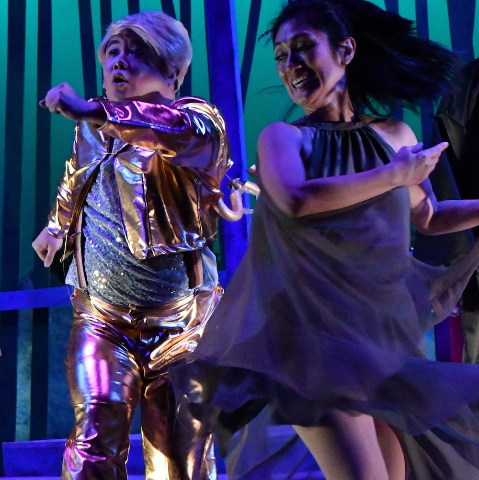 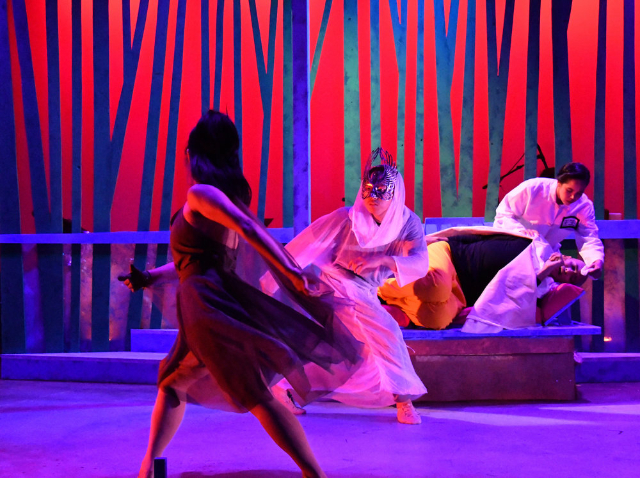 Pauli Armornkul as Nightingale, Minseob Yeom as Death, Chelsea Wellott (above) as ensemble, DC Scarpelli as Emperor (below). 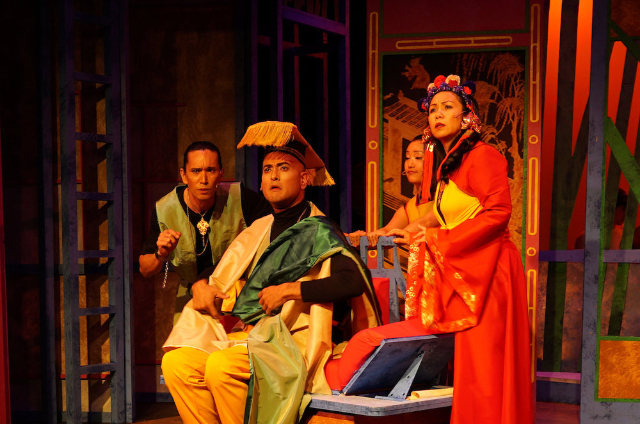 For poor people, pleasures usually come from the simple things in life. In Hans Christian Andersen’s 19th century fable, The Nightingale, the Emperor of China learns of the bird’s lovely song that captivates the peasants, and despite his endless treasures, insists that it be captured to entertain only him in his palace. This tale has been the basis for numerous artistic works, most recently, Min Kahng’s engaging musical, which has the elements to become a staple in children’s theater, with a clear and appealing storyline but with depth and maturity of purpose to satisfy adults.

The Song of the Nightingale is comprised of numerous clashes – the well being of the poor fishermen who must provide fish for the Emperor’s banquets versus the pleasure of Emperor; the needs of the Emperor’s sister who is the brains behind the administration versus the ego of the Emperor; and the young fisherman Xaio versus the girl that he loves, Mei, who aspires to higher goals and has been lifted from the fishing village to become a maid in the palace.

In the midst of these conflicts, the nightingale is caught. The Emperor wants her chained to keep her in the palace, and in one of the morals of the story, the nightingale agrees to this sacrifice when she finds that it will make the Emperor happy, because when he is happy, the people benefit. But the nightingale is a plain, brown bird, and when the Emperor is offered a garish, gold, mechanical “fake nightingale,” his aesthetic loyalties are challenged. The story is replete with moral issues – about superficial versus inner beauty; about nature versus the man-made world; about relationships; and about gaining wisdom and controlling one’s own destiny. There is even a send up of the fashion industry, highlighted by the song “Brown is in.”

The tale is told with great charm and humor and with shades of modernity that keep it fresh, especially for younger audience members. Every melodious song tells its own little story from the Emperor’s “It’s Lonely at the Top” to Xiao’s “The Girl I Know.” The idiom of the music is typical of Broadway musicals, with Chinese influence absent, except perhaps in the flute solo of the Nightingale motif. While the singing of the Town Hall Theatre principals is not consistent, it almost always satisfies. The ensemble pieces, however, are all balanced, rich in harmony, and well sung.

The playwright is a Bay Area product whose The Four Immigrants just completed its world premiere run at TheatreWorks. This work premiered at Alameda’s Altarena Playhouse in 2013, and several of the performers reprise their roles in this production, including Isabel To as Mei, the stalwart DC Scarpelli as the Emperor, and Christopher Juan as the Fake Nightingale. Matt Ono appears as Xaio, while Pauli Armonkul delightfully dances the title role, well choreographed by director Michael Mohammed. Each part is played with enthusiasm and conviction. Sets, which are dominated by sliding panels reminiscent of coromandel lacquer screens, and costumery reflect the Chinese origin of the action.

Town Hall audiences will enjoy this worthy production. The work deserves to have wings in some form or other. Interestingly, at the Altarena production with an adult audience, it seemed like a fable, but one that was targeted at adults. At Town Hall, the audience was evenly mixed adult and children. The children seemed remarkably involved and attentive.

The Song of the Nightingale book, music and lyrics by Min Kahng, based on The Nightingale by Hans Christian Andersen is produced by Town Hall Theatre and plays at its stage at 3535 School Street, Lafayette, CA through October 21, 2017.