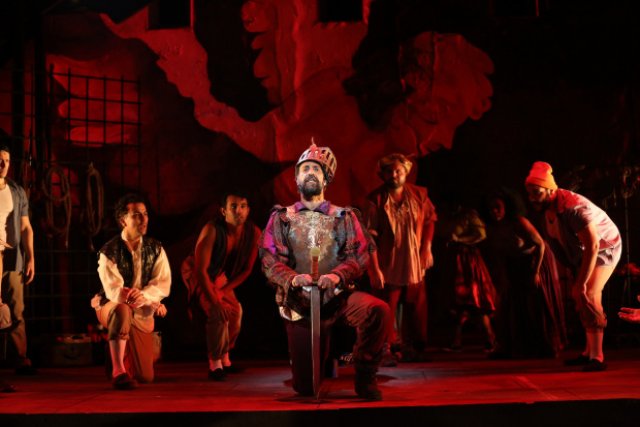 Phillip Hernadez as the Man of La Mancha. Photo by Carol Rosegg

The stage set by Wilson Chin immediately catches your eye when you enter Westport Country Playhouse to see Man of La Mancha running through Oct. 14.

Iron bars separate the audience from the stage and through them you can see the medieval dungeon.

Soon director Mark Lamos has actors beginning to populate the space as the overture commences. Then there is the dreaded knock from the door up high on stage left, a long steep staircase comes down from above and the Spanish guards enter with the newest prisoners awaiting judgment: Cervantes and his servant Sancho. They’re proceeded and followed by guards who take the opportunity to rough up some prisoners while the prisoners do the same to Cervantes and Sancho.

It is then you realize that this won’t be a sugar-coated, “lets-minimize-the-violence” production. Lamos doesn’t cover up that the prison is cruel, violent and dangerous. It sets the tone for a production that is refreshingly honest.

Doesn’t everyone know the story? Cervantes the famous Spanish author of the 16th century has been arrested and held for possible heresy, to be questioned by the Grand Inquisitor. But before he is called to answer, the prisoners will hold their own trial; a guilty verdict (which is expected) will result in the forfeiture of Cervantes’ goods.

He defends himself by enacting a story using the prisoners for the characters. It is the story of the great novel, Don Quixote about an aging country squire who, upset with the way the world is going, imagines himself a knight errant and goes off on adventures in the countryside. In the story he tells, Don Quixote, as the man calls himself, sees a windmill as an enemy, a rough Inn as a castle and the innkeeper as a lord of the manner who can official dub him a knight. He also sees the scullery maid, Aldonza as the fair and virtuous lady Dulcinea whom he is to protect.

Back at his home, his niece, her fiancée, the housekeeper and the local padre plot to make him confront reality.

A successful production requires an excellent Cervantes/Don Quixote and Phillip Hernandez meets the challenge. His voice is expressive and powerful, he bring a sense of age to the part, and his acting totally encompasses the character.

Gisela Adisa is a heartbreaking Aldonza/Dulcinea reflecting the confusion of this scullery maid who is used to being abused by men when she sees herself reflected in Don Quixote’s eyes as something else. She too has a terrific voice for the demanding score.

In the major supporting role, Tony Manna is excellent as Sancho (who is also Panza, Quixote’s squire). The role can devolve into a stereotype comic character. Manna keeps him more real while still finding the humor.

A number of other cast members – all who play both prisoners and the characters in the novel – are very good.  I would mention Carlos Encinias as the Padres, Michael Mendez as the innkeeper, and Paola Hernandez as Antonia, the niece.

But a few of the supporting cast don’t quite measure up – they either seem too young or don’t have the authority needed. This was particularly apparent in Clay Singer’s performance as Carrasco, the fiance who is most determined to force Quixote back to reality and who also is most against Cervantes as well.

Lamos has assembled a superb production team. The lighting design by Alan C. Edwards is spectacular – it reminds us we are in Spain and in a dungeon. Fabian Fidel Aguilar has created costumes that seem so right: costumes that have been worn over and over. The costumes for the characters in the play are the make-shift, adaptable, easy to put on attire a traveling troupe would use. They could fit in a trunk.

The choreography by Marcos Santana hits the mark. I always judge the choreography on how the “abduction” scene is handled. This is the scene where the muleteers abduct Aldonza and rape her; it is a delicate balance to make it graphic and upsetting but not x-rated. The trend has been to make the scene more dance than rape; Santana balances it just right. It is obvious what is happening but not too graphic.

The scene at the end when Don Quixote tilts with his arch enemy, the Enchanter or the Knight of the Mirrors was staged beautifully and the Knight was imaginatively designed.

This is a production that truly creates the emotion of the piece even for those of us who have seen it enough that we have become immune to it. This time, the first in many years, I was overcome with the message of hope and sadness.

I also noted lines that sometimes have slipped past, the padre saying “facts are the enemy of truth” and Cervantes’ line that Don Quixote has looked at the world and made it the world as it should be, creating his own reality.

If you see only a few productions a year, this production at Westport Country Playhouse is one you should not miss.