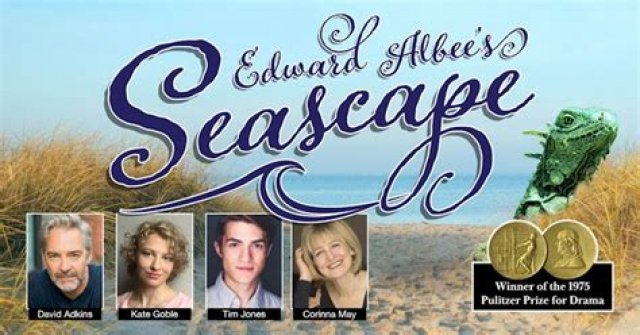 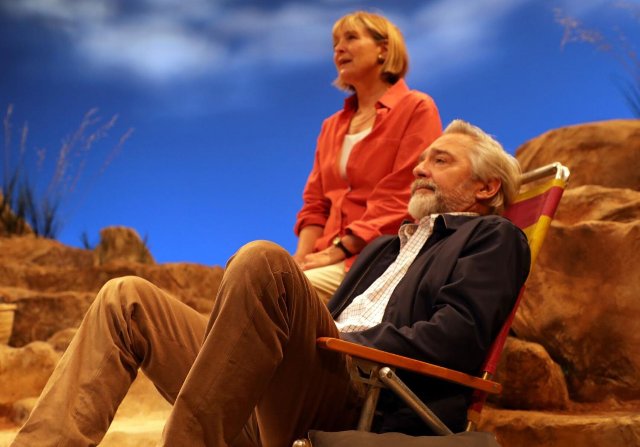 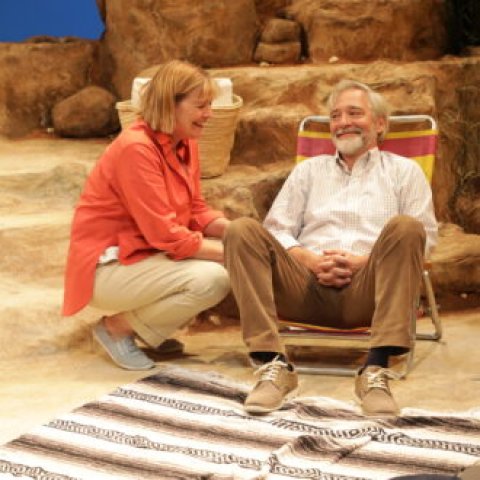 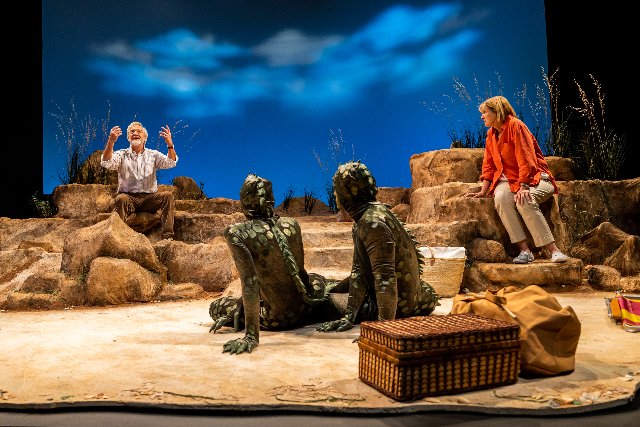 On the cusp of retirement, facing the next and final lap of the ratrace of life, Charlie (David Adkins) and Nancy (Corinna May), are enjoying a picnic on a beach. She is sketching the eponymous Seascape of Edward Albee’s 1975, Pulitzer Prize winning play (he won two others).

He is content to do nothing having had liver pate sandwiches and a shared bottle of wine. It’s possible that the sun has spoiled the food and they may indeed be deceased.

Inspired by Samuel Beckett’s Waiting for Godot it is one of a spectrum of fantasies that lace through Albee’s ersatz absurdist play.

Its heady trope and fantastical philosophizing may have dazzled the Pulitzer committee but did not extend to critics and audiences. The play closed after 65 performances on Broadway.

Objectively, it’s a lesser work in the remarkable Albee canon but easy to see why it has had productions. For Berkshire Theatre Group, director Eric Hill has sunk his teeth into the captivating encounter between the couple and their human-scaled lizard counterparts Kate Goble (Sarah) and Tim Jones (Leslie).

Is this another round of couple’s therapy evoking the bickering George and Martha of his iconic Who’s Afraid of Virginia Woolf from 1966, roughly a decade before Seascape?

Charlie and Nancy have their differences but are weak tea compared to the venomous and combative George and Martha. Perhaps they better resemble the banter and jousting of Vladimir and Estragon from Godot. But with just a soupcon of their mesmeric, vaudevillian, trampy, witty brilliance.

For an American version of theatre of the absurd, however, Albee was as good as we got. Something, je ne sais quoi, is lost in translation.

While Beckett shot his existential drama off the rails with the outrageous Pozzo and Lucky, Albee plays his hand with the lizard game. It’s a stretch, at best, but nonetheless this production is lively with brilliant and amusing moments.

We are grateful to Hill and his penchant for shaping challenging theatre.

The trouble is that there just isn’t all that much substance to Charlie and Nancy. Their personas are all too pedestrian as they pitter patter enervatingly through the quotidian. As a couple they are unremarkable which may be what induced the initial Broadway audience and critics into somnabulance.

In this play the generic beach is an absurdist metaphor. The design of Randall Parsons presents it succinctly and with a warm alfresco glow for a lunch in the lighting of Matthew E. Adelson. It is Albee’s unspecific beach but the play was written in Provincetown and evokes its dunes.

Nancy posits retirement as an opportunity and challenge to explore the beaches of the world. They will adventurously navigate from shore-to-shore. She reels off a litany of exotic destinations. No way he intones, son of a beach, content to just soak up the sun, nap, and do nothing. Are you beginning to sense why they are a less than absorbing couple?

Enter the lizards at the end of the first act. From the tedious and dragging first act we creep into the second with joltingly uncanny fear and trembling.

The couple is utterly terrified. Nancy demands that they assume submissive puppy positions. They are on their backs with “paws” up as the astonished lizards crawl forward, sniff,  and poke them.

The reptiles, with fabulous costumes by Elivia Bivenzi Blitz, and delicious movement direction from Isadora Wolfe, have us alert and jacked up in our seats. We are intrigued as they slither along the beach. After the enervating first act Hill has his pedal to the metal in the second one.

Then there is the deafening blast of a jet passing overhead in the sound design of the perennial Scott Killian. It has the terrified lizards running for cover.

Having crawled out of the sea it is but one of many discoveries and threats they encounter on land. Sarah is intrigued by birds and Leslie wonders how they manage to remain aloft.

“Aerodynamics” Charlie states then catches himself caught in explaining complicated physics to a reptile.

Having concluded that they mean no harm to each other, humans and lizards grope for commonality. For Hill, via Albee, they are more similar than different. But there is a lot of vocabulary and conceptualizing entailed. Charlie, who is all too human and not in the best way, having overcome initial fear, is at best patronizing.

Isn’t it obvious that humans are, by nature, better than lizards? Leslie, wonderfully played by Jones, hates fish which he describes as schoolish, territorial, and dirty.

Charlie pounces on that proclaiming his lizardly opposite number is a bigot. That’s a difficult to explain concept but it makes Charlie feel justified in his own sense of superiority. Overall, Charlie is a jerk though well played by the always wonderful Adkins. We have enjoyed him in more substantial roles.

Truth is we really come to love the lizards. They are nicer and more intriguing than humans.  Goble and Jones endearingly squeeze all the paste out of their tubes. She will remind you of the lovable pet in Albee’s later (2002) The Goat, or Who Is Sylvia. It ran the table of awards and is frankly a better play.

Leslie is strong, handsome and manly, surprisingly smart, and endearing. Sarah is cute as a button and engagingly loveable. You just want to take her home and stroke her reptilian little tail.

Albee milks compare and contrast with mordant wit. There is the inevitable “How did you meet?”

In addition to a précis on Darwin much is made of reproductive differences. Sarah is shocked that humans have generally one child at a time. While Leslie is flabbergasted that they hang out in the nest for some eighteen years.

Sarah, by nature, is constantly spewing out thousands of eggs with seemingly no commitment. It’s good that most perish, she explains, because otherwise it would get too crowded. That seems very wise coming from a lizard.

At the end of the day the lizards have had enough of land and return to the sea. They are invited to come back to the beach at any time. It seemed like an abrupt and unsatisfying end. Albee had fun with his exotic creatures then tossed them back in the tank.

Like those chameleons that Mom and Dad bought for us at the circus or rodeo. Analagusly to the Albee play, the fascination with and nurturing of our exotic pets never lasted for very long. After a day or two they were gone and forgotten.

It must be tough to be a lizard. Consider the grim prospect of ending up as a pair of boots.

As this absurdist play aptly demonstrates, what fools we mortals be.