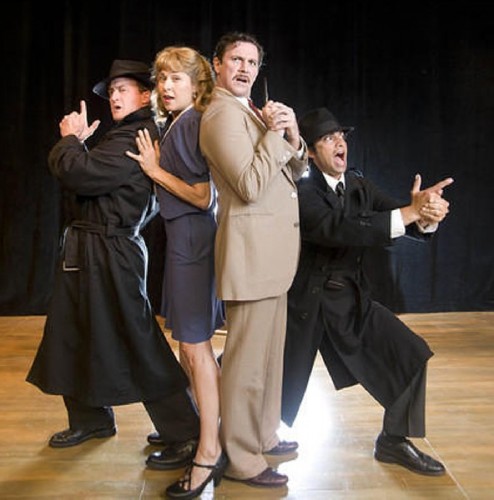 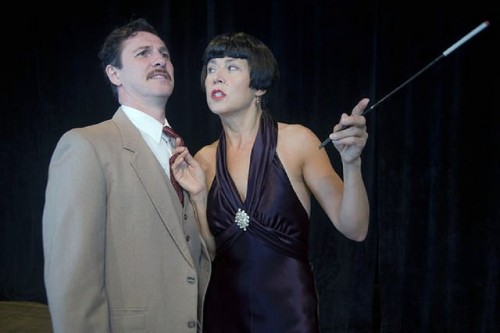 Elisabeth Aspenlieder as Annabella Schmidt ends up dead in the flat of Richard Hannay (Jason Asprey). 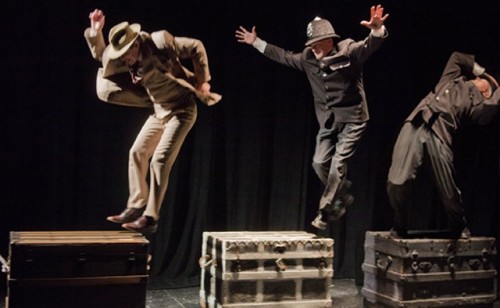 The famous train top chase scene from the film transferred to the stage. 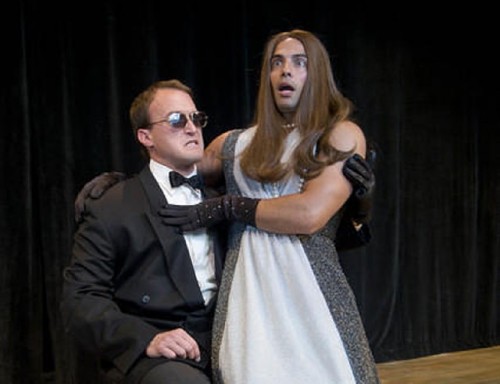 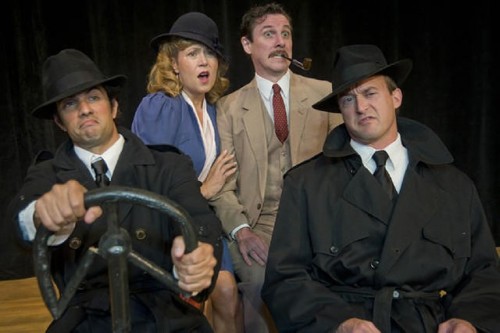 Driving around Scotland with the bad guys. 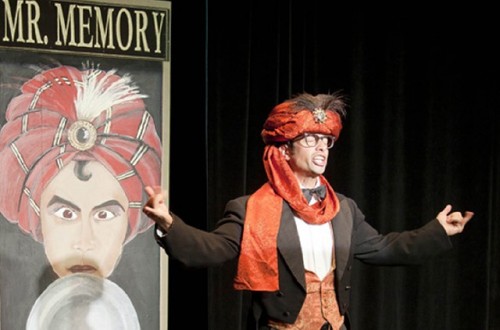 The 1935 British film, 39 Steps, a rompy, on the run, mystery/ adventure between London’s Palladium Theatre and the moors and heaths of Scotland, is widely considered as one of the early masterpieces by Alfred Hitchcock.

It represented a perfect balance between an intricate plot, the looming Nazi menace soon to erupt in World War II, and just the right soupcon of delicious romance. Clever indeed and lots of fun as Britain braced for global conflict.

Under artistic director Tony Simotes there is now a tradition of presenting farce during the fall season of Shakespeare & Company previously including Doyle’s Hound of the Baskervilles (twice) Real Inspector Hound and Wells’s War of the Worlds.

It is an annual occasion for the company to flaunt theatrical chops, let their hair down, and put on a hilariously wild and crazy show. It’s over the top Fall foliage fun for the cast and delighted audiences.

The 39 Steps is a melodrama adapted from the 1915 novel by John Buchan and the 1935 film. Patrick Barlow wrote the adaptation, based on the original concept by Simon Corble and Nobby Dimon of a two-actor version of the play. Barlow had originally intended to portray the character of Richard Hannay, but focused solely on rewriting the original version.

The first version of the play, with a cast of four actors, premiered in June, 2005 at the West Yorkshire Playhouse. The play had its U.S. premiere at the Boston University Theatre, by the Huntington Theater Company on September 19, 2007.It opened on Broadway, in a Roundabout Theatre production at the American Airlines Theatre, on January 15, 2008.

Richard Hannay (Jason Asprey) is at a London theatre, attending a demonstration of the remarkable powers of "Mr. Memory", a man with a photographic memory. After a brawl in which shots are fired Annabella Schmidt (Elizabeth Aspenlieder) the terrified woman sitting next to him is a lady in distress.

In his flat, begging  to spend the night, she reveals being pursued by Nazi spies and assassins. Military secrets are being smuggled to the Reich by a ring she identifies as The 39 Steps.

Oh yes, it seems that Ms. Schmidt ended up quite dead with a knife in the back the morning following the sleep over.

There's lots of physical comedy particularly when the couple, strangers before being handcuffed together, attempt to negotiate climbing over or through a fense. The gag fell off the tracks, literally, when through a prop miscue the handcuffs fell off. Aspenlieder and Asprey ad libbed so cleverly, to the delight of the enthralled audience, that they should keep it in the show.

Hannay is on the lam pursued both by those nasty Nazis and the coppers. On the train for Scotland, a clue from the deceased Schmidt, he plays musical seats with a couple of buffonish lingerie salesmen. Poking his head into the train compartment a news boy sells papers with Hannay's face plastered over the front page as a wanted killer.

If you know the film, shame on you if you don’t, it is fascinating how with a few props shoved about, huge trunks, doors wheeled in and out, furniture, theatre props, we see a quite compelling simulacrum of the original.

Like that famous chase scene on the top of the train, in this case, actors scrambling over four, large trunks. You had to remember the sequence from the film fully to appreciate its simulacra.

Farce as neo Platonism. If you catch the drift. If not, oh well.

Deconstruction and all this sort of rot as farce.

Slamming doors, tons of costume changes, that kind of rubbish.

All a bit mad and dizzy.

It’s a challenge to keep up with the multiple personality disorders of the truly gifted David Joseph and Josh Aaron McCabe. Joseph handles a dozen roles and McCabe a dozen more.

Some of the costume and character switches occur so swiftly that they are a blur.

Eventually, finding his way to a mansion in Scotland, Hannay is face-to-face with the arch villain and leader of the spy ring. In one of the best sustained bits of the evening McCabe fondles his white pussy who squiggles and squirms about. It's so beastly clever that we are agog wondering just how he does it.

The duo of Joseph and McCabe are off the hook as “hoot man” deranged Scots. There’s lots of play on “hoos” for “house.”

Of course no farce is complete without drag. Joseph is the “sexy” femme fatale of the ringleader while McCabe hunkers about as dowdy dowagers or a char woman.

In two acts the four go slamming and cavorting about before ending back at the Palladium for another encounter with Mr. Memory (Joseph).

Before it all comes to a crashing end with lots of gunfire Hannay asks the ultimate question of Mr. Memory.

But you know all this. You’ve seen the movie. Perhaps a dozen times.

Which makes the play all the more incredible.

Hats off to director Jonathan Croy who kept the action going at a frantic pace. And to four brilliant actors having a ball on stage for the delight of one and all.