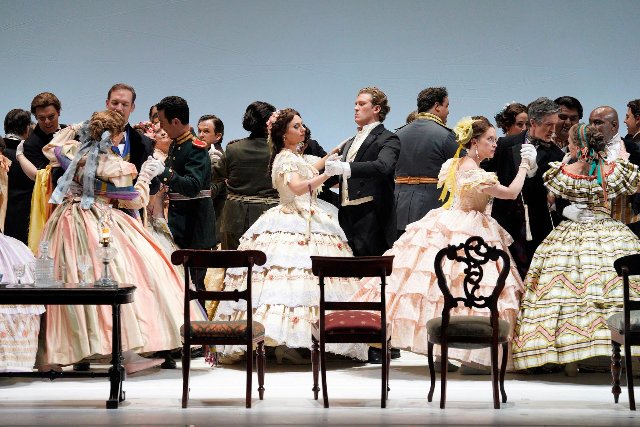 Russian opera supplies a rich trove to plumb the depth of its people’s souls.   Pyotr Tchaikovsky is perhaps Russia’s greatest music composer, and his operas are among some of his country’s most beloved.  Many Russian operas delve into the country’s special characteristics, such as its history and mysticism, but Tchaikovsky may have been the most cosmopolitan composer among his peers.  With a storyline of love and loss, class differences, and honor, the adaptation of “Eugene Onegin” from Pushkin’s novel could fit well in most European countries in the mid-19th century.

But, oh, that music.  Those haunting melodies and the euphonic lilt of the language produce a signature Russian experience.  It should be no surprise that this is currently the world’s most produced Slavic opera, given its many attractions.  Happily, it remains in the repertory of San Francisco Opera, which offers a striking and highly enjoyable rendition.

The title character represents the entitlements of the monied class and attracts little sympathy.  As Onegin, baritone Gordon Bintner cuts a dashing figure, and we understand Tatyana’s infatuation with this aristocratic visitor to her small town from St. Petersburg.  But Onegin considers the villagers to be rustic rubes, and he conveys his arrogance and contemptuousness in numerous ways.

Evgenia Muraveva portrays Tatyana, who sends a letter to Onegin disclosing her love for him.  Although he tries to be diplomatic in repelling Tatyana’s advances by saying that he isn’t planning to marry, his patronizing manner which belittles her situation is chilling.  But when he encounters a very different Tatyana years later, he is the moth and she the flame.

Onegin’s one redeeming quality seems to be his friendship with the poet Lensky, who had invited him to the village.  Lensky is engaged to Tatyana’s sister, Olga, performed by Aigul Akhmetshina, whose dark, honeyed voice suggests why she is in demand for lead mezzo roles.   While he considers Olga too simple for Lensky, Onegin flirts with her.  The insulted Lensky challenges Onegin to a duel, and tragically, Onegin kills Lensky.  Through this sequence, whatever goodwill Onegin possessed evaporates.

Tchaikovsky imbues “Eugene Onegin” with luxuriant, romantic music.  Passion drives the arias, and the orchestral score is a thing of beauty independent of the libretto.  Highlights abound, but certainly, Tatyana’s solitary letter scene ranks as one of the great soliloquies in opera, as she pours her heart out from dusk until dawn over her love for Onegin.  Sympathy for Tatyana grows throughout this scene.  Muraveva shows fine vocal and emotional tone in her lengthy aria, but War Memorial is a big house, and her volume didn’t meet its demands.  By the final act, her voice seemed stronger, as was the case with warm-toned Bintner as well.

Tchaikovsky uses a call-and-response, or orchestral chasing device, in the letter scene and elsewhere, in which brief solo phrases are handed off from woodwinds to metal woodwinds to horns in rapid succession and with affecting quality.  Vassilis Christopoulos conducts the orchestra with great precision through these and many other potentially perilous passages.  In leitmotif fashion, the composer repeats many lengthy phrases that might seem like lazy repetition except that they are so pleasing to the ear that one is happy to hear them again.  The conductor also captures the dynamics of the score with strong contrasts in volume.

Evan LeRoy Johnson as Lensky sings the other signature aria.  His beautifully plaintive tenor voice with bright timbre is the perfect fit for this sad reflection as he awaits his duel with Onegin, fearing that his golden days of spring will come no more and hoping that Olga will honor him in death.

One would be remiss not to mention the portrayal of Prince Gremin by Ferrucio Furlanetto.  This cameo role fits perfectly for a mature bass, and the legendary and still resonant and commanding artist celebrates nearly half a century performing on the professional opera stage.  In recognition of his contributions to the art and particularly to the company, he received the San Francisco Opera Medal on opening night.

What gives particular significance to this realization of the opera is that it reprises Robert Carsen’s noted production, with production design by Michael Levine.  The three closed sides of the stage are comprised of unadorned white walls.  Its minimalism looks sterile at times, but it does offer a blank canvas for expression.  Colored light casts against the walls to give differing effect – golden-orange for the autumn, with colorful leaves covering the stage; dark blue for the night of the letter scene; gray for Onegin’s rejection of Tatyana.  Most striking is the silhouetting used in the dueling scene to darken the mood.

With few competing patterns from scenery, Jai Alltizer’s beautiful costumes visually pop particularly those worn by the chorus.  And the chorus is exemplary doing what they do best, which is singing.  They frolic as well, though interestingly, the famous Polonaise which is traditionally danced, plays during the removal of Lensky’s body from the duel and as Onegin is dressed by attendants for the ball.

These days, it's hard to witness a performance involving Russian culture without comment.  San Francisco Opera has expressed its solidarity with Ukraine and against Russia’s villainous invasion in many ways.  It is hard to imagine that Tchaikovsky would have supported his country’s lawless act, and it is important to remember that all people don’t support the evil deeds of their own governments.  This interpretation of “Eugene Onegin” deserves to be seen.

“Eugene Onegin,” composed by Pyotr Ilyich Tchaikovsky with libretto by the composer and Konstantin Shilovsky is based on the novel of the same name by Alexander Pushkin, produced by San Francisco Opera, and plays at War Memorial Opera House, 301 Van Ness Ave., San Francisco, CA through October 14, 2021.