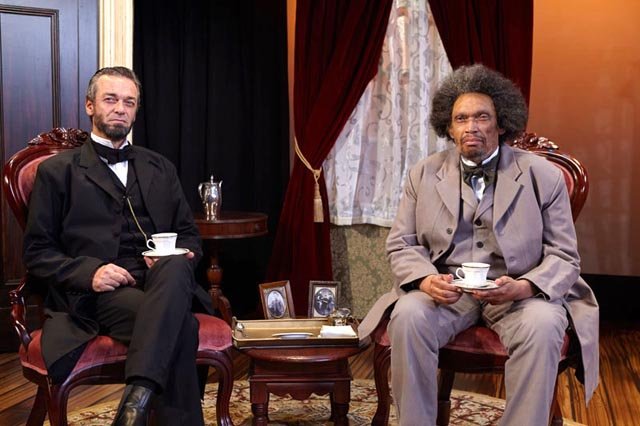 Covid-19 may still be with us but that hasn’t slowed down the creative theatrical efforts of North Coast Repertory Theatre (NCRT). The Solana Beach equity theatre company under the creative leadership of artistic director David Ellenstein, officially celebrated the opening of its 39th season last month.

Theatre is addictive. And loyal NCRT audiences have been hungering for the oldest of the fine art forms – live theatre – to re-open.  San Diego and north county live theatres have been chomping at the bit since Governor Newson closed down all brick and mortar entertainment venues in California six months ago.  He lifted the ban on Wednesday, September 23rd for movie theatres, but not yet for live theatre performances.

Undaunted, by the ban and the pandemic NCRT decided to think outside the traditional ‘theatrical box’, as a way of keeping in touch with its subscriber base. Translation:  NCRT current production is a play written in 2012 by award-winning prolific regional theatre playwright Richard Helleson, titled “Necessary Sacrifices”, directed by Peter Ellenstein.

The first thing we need to clarify at the outset is this quasi-historical, drama being streamed to viewers and NCRT audiences in “movie style” format is that it is not the famous 1858 Presidential debates between Republican Abe Lincoln and Democrat Stephen Douglass both of Illinois vying for the Presidential nomination of 1860.

“Necessary Sacrifices” deals with the relationship between US President Abraham Lincoln and the acclaimed abolitionist Frederick Douglass.  Douglass was an escaped slave who became a prominent activist, author, public speaker and a leader in the abolitionist movement during the Civil War.

America’s Civil War is probably the most written about conflict in our nation’s history, yet it’s still a story without an ending one hundred and fifty-five years after the war ended.  Yes. We reunited our country into a single nation again, however, if one looks back some fifty-five years, as well as what one is seeing taking place in America of 2020, one could make a case that the conflict is still festering; not as an overt shooting war, but more like legal political guerilla warfare.  But I digress.

Playwright Helleson, a Californian by birth, is considered to be an expert on “Southern-based issues” having written several plays when it comes to stories about the Civil War, or what older entrenched Southerners used to refer to as “the war of the late unpleasantness”.

What North Coast Repertory Theatre has mounted is Helleson’s intelligent, insightful, engaging play where two literary giants:  Lincoln and Douglass, meet in August of 1863 in the White House to discuss the immediate future of the Republic and beyond, in respectful and honest dialogue.  Lincoln the great Emancipator and Douglass the passionate abolitionist, each with agendas seeking common ground of agreement that only hard sacrifices can achieve.

Douglass tells Lincoln that all the black man, free or slave, is asking from the white man is respect and dignity; one human being to another.  Lincoln is empathetic but knows the climate of the country and the Congress at the moment is in their ‘punish the South’ mood. He tells Douglass, in all honesty his hands are tied.  “”I’m just an old mule at the front of the line of old mules.” He resignedly replies to Douglass (or as Bill Clinton might have said, “I feel your pain”).  However, the dilemma of who can remedy the situation, is why Douglass came to the White House to see him.  Lincoln gently reminds Douglass, “I swore an oath to uphold the Constitution.  In the long run it’s really a States Rights issue”.

The Congress is always in the driver’s seat.  Political plays and movies used to be a way for the average citizen to learn the basics of how our government worked. Politicians by nature serve more than one master.  But ultimately it’s the people who have the power to change the status quo via the elective process.

Hawthorne James as Frederick Douglass, is a magnetic actor.  When the camera is on him, so are all eyes.  It’s a nicely nuanced performance.  As an audience, we’re pulling for Douglass to succeed in his mission of having Lincoln intercede for equal pay and the recognition of bravery in action and death benefits for the families of the segregated colored Union army units.

Ray Chambers as Abraham Lincoln, the 16th President of the United States, has the tougher image battle for the audience.  Not many can remember what Frederick Douglass looked like in real life.  But every school boy and girl over the age of five know who Abraham Lincoln is, how he dressed, and what he wrote and said.

To his credit and that of director Peter Ellenstein, Mr. Chambers creates a President Lincoln persona that both compliments his performance and resonates with the audience (like Daniel Day Lewis did with his portrayal of Lincoln in the eponymous movie and the persona he created).   Both Mr. James and Mr. Chambers acquit themselves with honesty and conviction in their portrayals of real historical figures.  “Necessary Sacrifices” is a talky two-hander play. However, I feel the time spent with them is well worth it.

In the technical department led by Director Ellenstein, Aaron Rumley’s cinematography and editing skills hit the mark.  Set and Scenic renderings is courtesy of design wizard Marty Burnett who recreates the 1863 Oval Office; providing plenty space for the actors to work their magic.

Costume designs by Elisa Benzoni are spot-on, with camera operators Chris Williams and Aaron Rumley, and music provided by Michael Silversher, along with Hair and Wig design by Peter Herman, make it a compelling North Coast Repertory Theatre production to see.