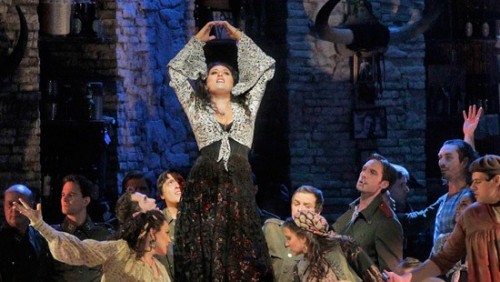 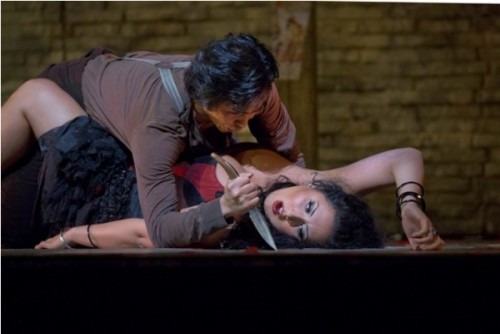 Even at the unusually brisk pace conductor Mariotti takes in the revived Met production, titillation takes you in.  Mariotti and this Carmen have worked seamlessly together at La Scala.

In some ways, Carmen is the easiest of all operas to mount.  On the face of it delicious, the music drawing you in, enticing and exhilarating at once.  While the first audiences resisted its charms, for the past century it has broken box office records.

Merimee started his novella Carmen by remarking that women are as bitter as gall.  They have only two good moments, in bed and in death. Zvulen and Rachvelishvili give us Carmen in both positions, but she resists subservience.

While Richard Eyre’s production is terrific, how it is staged varies from mounting to mounting.  The Carmen arriving at the Met this fall is conceived with attention to detail, and magical broad strokes.  Under the stage direction of Zvulun, Carmen’s story comes to life.  She may be a victim of misogyny, but she is carmen: a song, a poem and the spell she casts.

Zvulun has two supremely gifted talents to work with.  Anita Rachvelishvili and Yonghoon Lee, while not your most obvious matchup physically, convince in their passion and their volatility.  Both have incredible vocal instruments which are also somewhat unusual.  Rachvelishvili’s chest voice is deep and rich, with almost an abrasive rumble which perfectly suits the role.  She is Carmen.

Prosper Merimee describes his star "of a strange and savage beauty, a face which at first surprised you but it was one you could never forget. Her eyes especially had an expression at once voluptuous and fierce which I have never since noticed in any human eye. Eye of gypsy eye of wolf is an old Spanish expression…denotes quick observation."

Zvulun has helped her parry and thrust, to give with one hand and take with another, to seduce and betray.  Whatever you call the extremes within one character, Rachvelishvili captures them in her voice and in her movement.  You can’t take your eyes off her.  She is thoroughly engaged in the stage proceedings while other characters move the story forward.

Yonghoon Lee has a wonderful edge to his voice, which spans octaves with seeming ease.  He too inhabits his role, not so much wimp as a besotted victim.

Zvulun adds touches small and large.  From the young boy who uses a shirt as a muleta, his toreador's cape to an orange tucked in Carmen's bodice.  The orange replaces the cinnamon of Merimee, but from the moment Carmen takes her first bight, as though this was Eve's apple, we know where she is going: up in flames accompanied by castanets. In this larger-than-life Carmen, mocking Don Jose, driving him crazy, the staging intrigues and is apt.

Merimee would have loved Rachelishvili’s Carmen, stepping “like a thoroughbred filly at a Cordova stud.”  While Carmen is never repulsed by anything, including a murder to which she reacts by simply narrowing her eyes, she is always saying ‘yes’ like Molly Bloom under the Andalusian walls.

The only out of place singer is Micaela, undoubtedly the choice of the Met’s general manager who favors pretty, skinny young women whose profiles are more elegant than their voices.  Unfortunately in this case, Micaela not only sings small, she also fails to engage in stage action.  This type of performer is often unfairly inflicted on both their performing partners and the live audience in the interest of cultivating a pretty face for HDs.

A tantalizing Carmen, in which Rachvelishvili sings Bizet as though his were the mystic songs invoking Bari Crallisa, Queen of the Gypsies, as she taunts Don Jose to death, displaying all the while her draw, even as she says, I could save my life by lying, but I won't.   Everyone loves Carmen, but this production mounted by Zvulun is unique in its specificity and its wildness.

This Carmen is not a figure of myth, but one of passion.  Because passion is exuded by three of the stage animals in the main roles, theatricality and performance dominate the pageantry. Zvulun directing reminds us how much we would miss if Carmen followed the opera’s concluding gypsy epigram:  Into a closed mouth, no fly can enter.