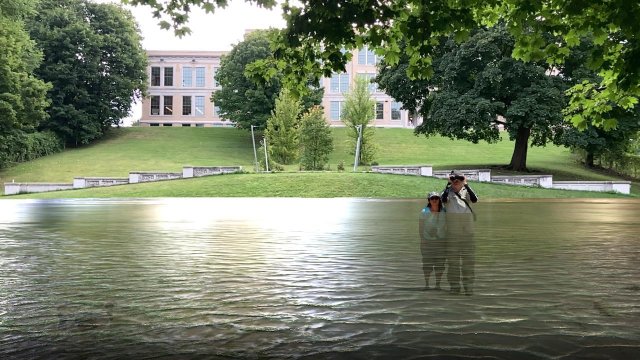 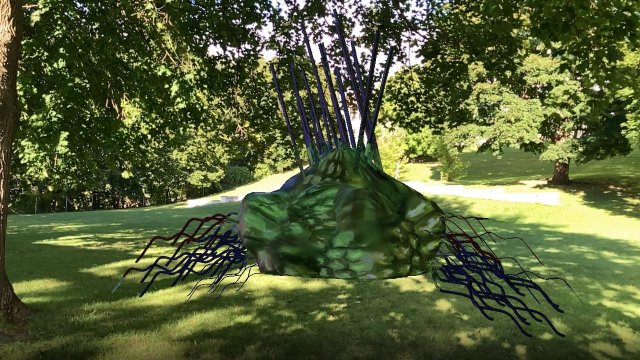 Augmented reality (AR) is the integration of digital information with the user's environment in real time. AR users experience a real-world environment with generated perceptual information overlaid on top of it.

Freeman and Lewy have installed their distinctive augmented reality works at the Installation Space gallery, as well as at access points in downtown North Adams public spaces. The augmented art is viewable by downloading the free Hoverlay app on a mobile device.

Climate Change Migration Stories is an augmented reality public art project designed for exhibition in public squares and other publicly accessible spaces. People encounter the project by way of wayfinding signage placed at the physical location, with information and instructions about how to experience the augmented reality content. Users use common mobile phones to guide themselves on a walking tour through a series of virtual scenes. The experiences consist of world scale, photorealistic scans created on location in and around the U.S./Mexico border.

John Craig Freeman is a public artist with over twenty years of experience using emergent technologies to produce large--scale public work at sites where the forces of globalization are impacting the lives of individuals in local communities. His work seeks to expand the notion of public by exploring how digital networked technology is transforming our sense of place.

Inspired by the 1965 film Alphaville and the time machine from Je t'aime Je t'aime. Lewy has created a multi-episodic augmented reality narrative. Beta 64 tells the story of an alien supercomputer who has taken over and banished all art and poetry and turned all the artists into monsters.

Michael Lewy is an artist based in Boston. He works in a variety of media, including augmented reality, virtual reality, photography, and video. He is the author of Chart Sensation, a book of powerpoint charts, and has shown at the deCordova Sculpture Park and Museum, the Pacific Film Archives and Carroll and Sons Gallery in Boston.