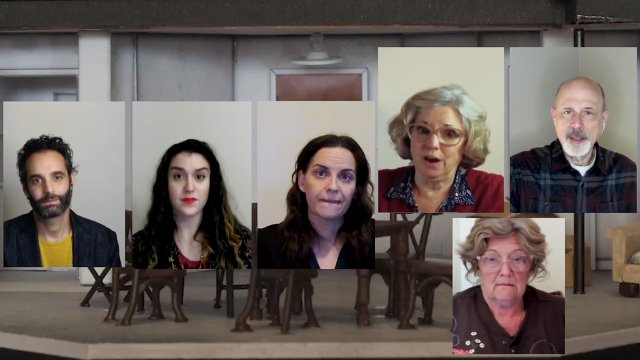 Certainly, six years ago, “This too shall pass” carried the same meaning as it does today. But oh, how we yearn to believe a speaker of those words in this age of COVID-19. And so, when a character from Stephen Karam’s award-winning play, The Humans, utters the aforementioned phrase in a re-assuring tone, the words caress our ears more so than it did six years ago.

In fact, everything in The Humans seems magnified from the first time when, in the middle of the last decade, we met the Blake family. It comprises the individuals who give Karam’s play its title. In the midst of a pandemic, fires raging, and forced isolation, the piece feels timelier than it did when the play debuted. We need, perhaps more than ever, human connection, just as the Blakes do in order to remain sane in a world that seems almost as topsy turvy as our own. When the Blakes hold hands in prayer, our longing for such human contact increases significantly. Perhaps, you might feel an intense desire to reach out your hands, as though you could join in. While that’s unfortunately impossible, you can join in virtually by watching the nonprofit, professional Olney Theatre Center’s intense and devastating, touching yet funny production of Karam’s dark  dramedy.

The production, featuring first-rate acting, is available to stream through Oct. 4. Speaking of humor, an audience watching The Humans needs it. Without comedy, the play would feel unbearably heartbreaking. So, credit director Aaron Posner for finding the right balance between the heavy and the humorous in Posner’s taut script.

In this Tony-award winning play, a finalist for the 2016 Pulitzer Prize for drama, the Blakes gather for Thanksgiving dinner in Brigid Blake’s and her boyfriend Richard Saad’s run-down Manhattan apartment in Chinatown. Each character carries at least one burden. Specifically, Brigid is a musician mired in student debt. Further, she’s having a difficult time trying to land a permanent job in her field, so she takes on part-time bartending gigs.

Meanwhile, her sister, Aimee, is a lawyer who has developed a serious abdominal ailment. Additionally, she experienced a nasty break up with her girlfriend.

Aimee and Brigid’s father, Erik, is a maintenance supervisor at a Catholic school in Pennsylvania. He harbors a dark secret – one that he’s been hiding from his daughters.

Erik’s wife, Deirdre, has been working as an office manager with the same company since she graduated high school.

Finally, Erik’s mother, affectionately called “Momo,” is suffering from Alzheimer’s Disease. Therefore, she repeats phrases such as “You can never go back” and her language can turn vulgar unexpectedly.

Karam has written a compelling one-act play that takes place over the course of an evening in one setting. The author has suffused his piece with humor, warmth, honesty, nuance, suspense, an element of surprise, symbolism open to interpretation, identifiable, well-drawn characters, and often snappy dialogue. It includes language that deftly captures the uneasiness these folks feel as they discuss topics that should resonate with many these days. They include dealing with illness, loss, financial difficulties, caring for an elderly, ailing parent, family traditions, generational differences, and parent-adult offspring relationships.  Above all else, Karam reminds us that support from family is a must during difficult times.

The playwright has avoided turning The Humans into merely another piece from the family gathering genre. Instead, Karam incorporates moments of creepiness that punctuate the unease that these Chekhovian characters feel – and that we might feel in our own lives.

As the stressed-out characters argue, express their fears, and try their best to make the feast meaningful and festive, disturbing noises pierce the otherwise quiet home. Is the house haunted? And what do we make of the abrupt, mysterious ending? Chances are, audience members will have different answers to such questions.

Karam has created likable people who, despite their problems, never publicly resort to self-pity. They seem to possess an indomitable spirit and, despite saying hurtful things, they know that they’re family. And families support each other through difficult times, which they manage to do. Despite their eccentricities, it’s hard not to enjoy these people’s company for two hours. In fact, you might not want to leave them.

Of course, it helps that the acting is uniformly excellent. In fact, the actors are presenting a master class in naturalistic acting. It looks effortless.  Dialogue, gestures, expressions and emotions seem authentic and spontaneous. Thanks to cast members and their director, the pacing is varied, but never too fast or too slow.  The cast is believable as a family and as individual, distinct people, complete with foibles, faults and humanity.

As Erik Blake, Mitchell Hebert's dark eyes dart from one spot to another as his eyebrows slant into a troubled and wearied expression. At times, he rubs his eyes and face. This all makes sense – the man, who is experiencing bad dreams, has hardly slept. But Hebert’s Erik manages to summon enough energy to speak in a sharp, forceful voice when he’s arguing with someone. The character, who is set in his ways, can be irritable and judgmental. However, neither Karam nor Hebert turn Erik into an unlikable person. Both the writer and actor show us his softer, more vulnerable side, especially toward the end.

Meanwhile, as his wife, Deirdre, Sherri L. Edelen injects the character with a zest for life and a tendency toward wry humor. Also, Edelen ensures that Deirdre comes across as a caring mother who wants what she feels is best for her daughters.

As Deirdre's quieter daughter, Kimberly Gilbert imbues Aimee with convincing awkwardness but also a strong will to live. Gilbert plays her as someone who is concerned about herself, but doesn’t feel sorry for herself.

As Aimee’s talkative, opinionated sister, Brigid, Dani Stoller imbues the character with charm, accentuated by red lipstick and wide, expressive eyes. Like her mom, Brigid can be sarcastic and impulsive in what she says. But Stoller ensures that Brigid remains likable, even during these instances.

Jonathan Raviv gives Brigid's boyfriend, Richard, an easy-going charm and imbues him with an eager-to-please demeanor.  And Catie Flye, with a tortured expression on her face, speaks in a voice that betrays convincing emotional pain as she repeats “You can never go back.”  To her credit, Flye, who looks a bit young for the part, never turns Momo into a caricature or stereotype.

The Olney Theatre Center filmed this production with the actors in six separate locations. Each performer occupies a space no bigger than a square. These squares rest on a miniature set of the multi-storied home (designed by Paige Hathaway) in which Brigid and her boyfriend live.

Even though the performers are in different places, it’s easy to believe that they’re all in one location. To the director’s credit, the squares are never just lined up one right next to the other. Instead, Posner moves the squares around to ensure variety in the “staging.”

During one instance in the play, the characters hold hands in prayer. During another moment, they sing a song of thanks. They’re trying to make the most of what could be their last Thanksgiving together, as one character puts it. But they’re living in the moment, physically present with each other, relishing this time of family togetherness and celebration.

Doesn’t such a thought make 2014, the year in which this play debuted, seem like a century ago?

The Humans, by Stephen Karam, is available to stream from Suburban Washington D.C.’s Olney Theatre Center through Oct. 4. The cost is $35 per household. For details on how to watch the play, visit https://tickets.olneytheatre.org/the-humans/video.