Free For All by Megan Cohen 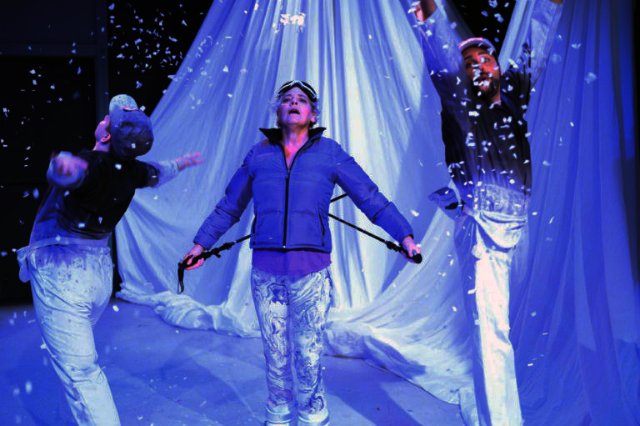 As the lights come up on the small Cutting Ball Theater stage, Stacy Ross as Julie is clad in snow ski gear with poles. A fan blows a storm of confetti snow. Throughout her riotous and wryly delivered soliloquy, two puppeteers help her negotiate the imaginary curves as her skis carve the snow down the hill – Nob Hill. That’s right – our own San Francisco Nob Hill. As she approaches Chinatown, she reflects on random thoughts, loses control, and smashes into John, played by Phil Ting, who happens to be the sous chef at her mansion atop the hill. Julie is hosting a fancy dress party to celebrate the last day of San Francisco’s skiing season, and when she ran over John, he was provisioning for the party. Fortunately, the party precedes the snowmelt, as Chinatown is expected to be flooded by the waters.

Isn’t this supposed to be an adaptation of Strindberg’s masterpiece Miss Julie? Many adaptations of plays update the timeline and shift the locale to one that is familiar to the audience, but playwright Megan Cohen adds a new plot layer of climate change and turns the original play’s dark humor and sharp edges into farce. The result is raucous, yet thoughtful entertainment, with stellar contributions by playwright, actors, and director.

The choice of Miss Julie, which was prompted by Artistic Director and director of this play, Ariel Craft, is a sly one. Strindberg’s work is full of rigid social standards, classism, and misogynistic sexism. The creators’ objective with this adaptation was less to coddle it and prune around its periphery and more to lacerate its central theses.

Free For All shifts to a feminist approach, befitting our time and place. That said, is Julie really a feminist or rather a bad behaving individual? She doesn’t know John’s name, although he has worked for her for some time. She denigrates him when he refers to the mansion’s kitchen as his (chefs typically identify in this way) and reminds him that she owns the estate. She devours deviled eggs prepared for staff when ample and fancier food was set out for the party. She has a dalliance with John when his seemingly narcoleptic girl friend is nearby.

More on point, the playwright makes mincemeat of the monied, mostly men. In addition to their central roles, Ross and Ting portray two of the male guests at the party. They are hilarious as the shallow and self-indulgent Brockingfield and Jacobson, drenched in their sense of privilege, fatuously competitive, and with haughty disdain for women and the poorer classes.

Of greater consequence is neglect as the nabobs fiddle while San Francisco drowns. Many of the tragedies in American society result from the hands-off-until-disaster-confronts-us approach. Look at opioids, homelessness, nicotine vaping, fake news, and even the socio-economic costs of ride sharing. Brockington and Jacobson represent climate change deniers (read: the national leadership of the Republican party.) Some aren’t clever enough to set aside their senseless political theories and biases, while others feel that they will always be better positioned than the hoi polloi to weather the circumstances.

So, is it important that an adaptation hew to the play that it honors? It’s really a matter of expectation and want. Today we should expect adaptations to be loose not only in content but in message and tone. This outing falls into the same cauldron of contemporary adaptations of Chekov plays, such as Vanya and Sonia and Masha and Spike, Stupid F***ing Bird, and Kill the Debbie Downers. Take identities and frameworks from a classic and squeeze modern meaning and comedic situations out of them.

How well does Free For All follow its model? The original Miss Julie is from the noble class; Jean is a valet; Jean is engaged to Christine, a maid in the household; and Julie and Jean have a dalliance. Sound familiar? Or at least corollary? Apart from what has already been mentioned, a key departure is that Strindberg had made naturalism a stated major focus of his artistic effort. Clearly, the transition to parlor farce abandons that aspect, but the overwrought humor delivered by two comic talents and with a delightful staging concept and execution make it fun.

Free For All, a world premiere written by Megan Cohen is produced by Cutting Ball Theater and plays on its stage at 277 Taylor Street, San Francisco, CA, through October 20, 2019.