The Impossible Dream a Kosher Muffaletta 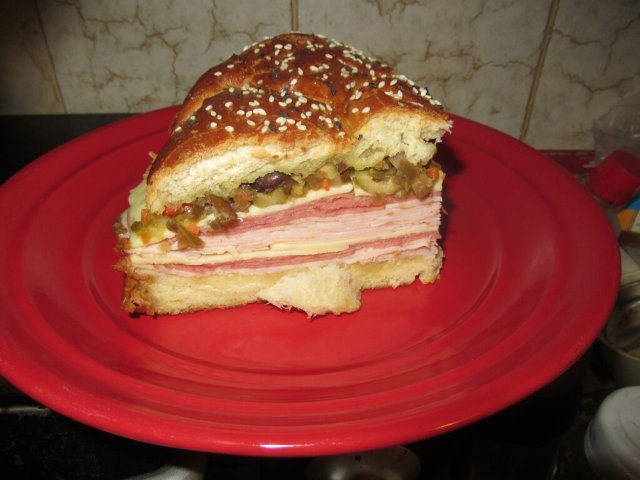 For people living in New Orleans or visitors to the city, an Italian specialty, the muffaletta – a sandwich composed of various processed meats, cheese and olive salad layered upon a huge round loaf of sesame seeded Italian bread – has been both a staple for locals and a much ballyhooed treat to be sampled by tourists.

While kosher olive salads consisting of various chopped olives and peppers swimming in olive oil are available for enterprising kosher chefs, the opportunity to find kosher Italian muffaletta loaves and the problematic mating of dairy and meat items must be addressed before the impossible dream of a kosher muffaletta can ever be realized.

But I am here to assure you, where there is a will, there is a way. The impossible dream can be achieved and, especially at this time of year, when round challahs are readily available. Yes, I said round challahs. The dough for a challah is a bit sweeter and lighter than its more dense Italian cousin and they lack sesame seeds, but with a little patience and ingenuity, round challahs can ideally substitute for muffaletta loaves with amazing results.

The onset of Rosh Hashanah means the typically braided challahs found at bakeries on Fridays are replaced by circular challahs intended to reinforce the cyclical nature of the Jewish New Year. This is the time to scoop up a small, eight-inch round challah that is the suggested size for preparing this kosher muffaletta. The round challahs freeze easily, but should be defrosted when beginning the process of making a muffaletta.

As I’ve already said, round challahs lack sesame seeds, an expected part of the muffaletta experience. But transforming a plain challah into a seeded roll is not very difficult. It requires an oven, some sesame seeds and an egg. This important first step also helps to give the top layer of the muffaletta challah a tad more crunch than a plain challah.

To begin, place the round challah on a large sheet of parchment paper atop a cutting board. Carefully cut the challah into two halves of equal size, each between 1 and 1/2 and 2 inches tall. Remove the bottom half and place it off to the side.

Preheat the oven to a temperature of 375° Fahrenheit. Place the contents of an egg into a bowl and, using a fork or whisk, beat the egg until it is aerated well and no trace of the egg white can be seen. Using a kitchen brush, lightly brush the top portion of the challah that is on the cutting board with the egg wash. Allow a minute for the mixture to set and add another layer of egg wash on top of the challah. Next, shake out kosher sesame seeds onto the top of the loaf.

Carefully, turn the top of the challah over and match it, open-faced, with its mate. Open the jar of kosher olive salad and, using a clean kitchen brush, lightly brush the inside of each loaf with olive oil from the jar. Don’t be stingy. Liberally baste the interior of the challah, but don’t supersaturate the bread. Usually two brushes over both sides is enough to get the olive oil to permeate the two sides.

The amount of meats will fluctuate, depending on what amount of meat to cheese substitute you will desire. It is okay to go overboard on the amount of meat. In a conventional, non-kosher muffaletta, the meats are traditionally ham, salami and sometimes mortadella. Obviously, with the exception of kosher salami, none of those would be permitted under the laws of kashrut. So, substitutions must be made with kosher meats.

The ham can readily be replaced by smoked turkey, which has the same consistency of ham. Sliced very thinly, smoked turkey is an excellent substitute. At least one pound of smoked turkey would be required for a muffaletta. It is important to layer the turkey to cover the surface of the bread. This may mean at least five or six slices to start.

Thinly sliced kosher salami with a weight of at least three-quarters of a pound would follow the turkey. Keep in mind that the layers need to be established well. It is an important part of muffaletta history that the amount of ingredients seems excessive. The reason the sandwich achieved a certain measure of fame was that it took on the reputation of being capable of feeding an entire family. So, when placing the meats onto the bread, more is better.

The salami, which is typically circular, will cover the layer of smoked turkey quickly. Again, keep in mind the meats are thinly sliced, so don’t hesitate to make a second or third layer with the salami. Your taste buds will thank you later.

Since there are no kosher substitutes for other cured meats like mortadella or prosciutto, there really is no need to go looking for any other kosher meats. The sliced turkey and salami complement one another very well and corned beef, pastrami, or tongue are not good substitutions due to consistency, seasonings and the amount of flavonoids they contain. The dream is to make a kosher muffaletta and fashion it out of ingredients that are consistent with its non-kosher cousin.

The next layer will be that of the cheese. Anyone who knows the first rule of kashrut (“Thou shalt not seethe a kid in its mother’s milk.”), knows there is no way of getting around the fact that any cheese item must be non-dairy. Thankfully, there are a number of kosher products made from soy that have the consistency of cheese and very closely emulate the flavor of real cheese. The product I found was not cheap, approximately $9.00 for nine slices, but it is absolutely necessary to make a proper muffaletta.

In reality, the soy cheese will limit how big a muffaletta will be. You will need to have enough meats to make the application of the cheese substitute not seem inadequate. The proportions of 1 pound of smoked turkey, 3/4 pound of salami and one package of vegan cheese to one another should be perfect for an eight-inch challah. Larger challahs will require more meat and more cheese substitute.

Adding the cheese substitute should be a little less of an effort than the meats, but a little will go a long way. Trust that the flavor of the meat, coupled with the bread and the other ingredients will merge into an incredible gustatory experience. Leaving half the package of cheese substitute on the side, the process of layering the smoked turkey and the salami should follow. The final layering of the second half of the vegan cheese package will be the final ingredient before the olive salad is added.

If there is one ingredient that cannot be substituted, it is olive salad. Thankfully, it is not hard to come by kosher olive salad and it is not too difficult to bring together different olives and several chopped peppers into a jar filled with kosher olive oil. Finding a jar already prepared and bearing a kashrut symbol of certification was easy enough for me. However, the process of making olive salad is not laborious. So, if anyone wants to make olive salad ahead of time, there’s nothing to stop them.

As we know, the jar has already been opened and some of the olive oil has already been applied to both of the two halves early in the sandwich building experience. What remains to be done is to spoon out a copious amount of olive salad to rest atop the vegan cheese. Place the bottom half of the challah with the meats, cheese substitute and olive salad atop parchment paper atop a baking sheet in the same 375° F oven as before. Do not put the top half of the challah into the oven. Let the bottom half stay in the oven for six minutes.

After six minutes, place the top half with the sesame seeds atop the bottom half of the challah. Bake at 375° F for an additional three minutes. Be prepared to remove the muffaletta quickly should the top receive too much heat and start to darken or burn. Keeping it in the oven for only three minutes should guarantee it receives just enough heat to warm the bread and the other ingredients without burning them.

It is important to allow the muffaletta to rest once it is removed from the oven. This helps to let the juices mingle back into the bread and also will allow the bread to stand up to a knife once it is being cut. A bread knife is ideal to cut a muffaletta, which should be cut into quarters.

It is not necessary to reheat a muffaletta, once it is prepared. They can be frozen, if warranted, and defrosted, but the best tasting muffalettas are those that are served fresh and usually at room temperature. If reheating is desired, keep in mind to use high heat for a short period and, again,  keep an eye out for the bread so it doesn’t burn. Each quarter is plenty for a lunch or dinner for most people, although some might eat a half of a sandwich, if they are particularly famished.

There you have it: the impossible dream of a kosher muffaletta is yours for the trying and with the surplus of round challahs available, this time of year is a good time to make yours too.