The Gates in Central Park

Project by Christo and Jeanne-Claude 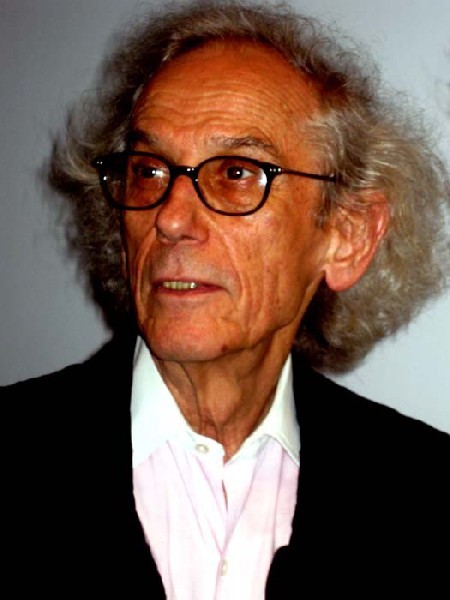 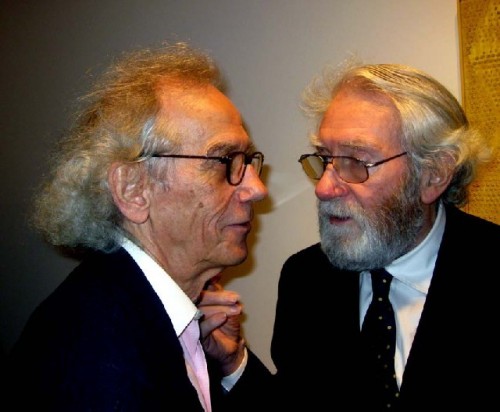 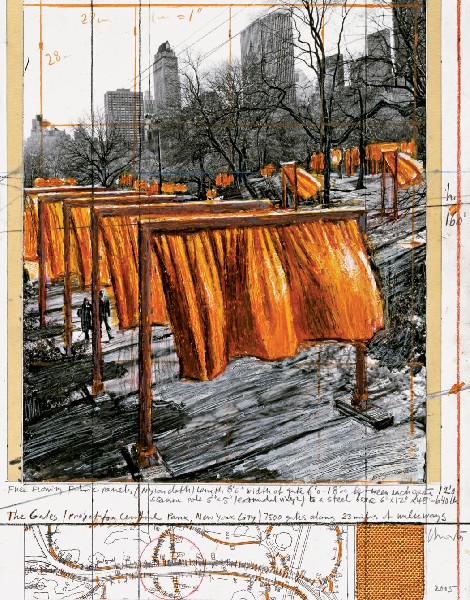 A drawing for The Gates project. 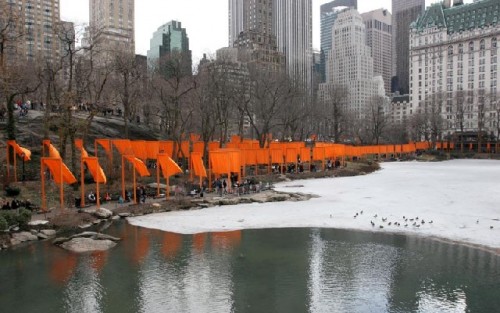 The pond of Central Park. 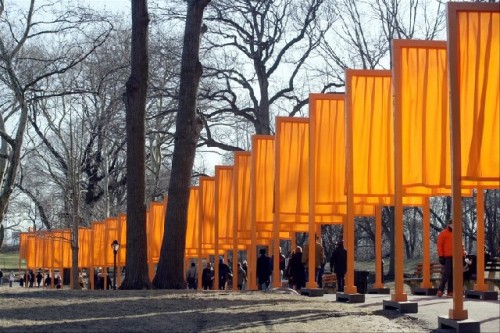 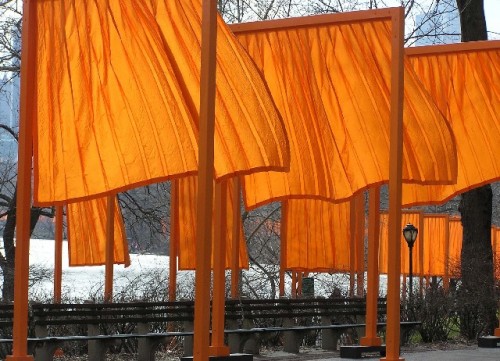 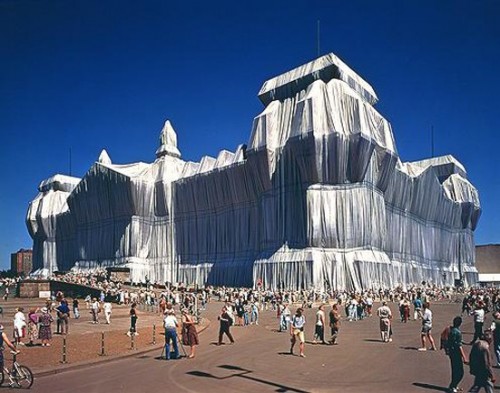 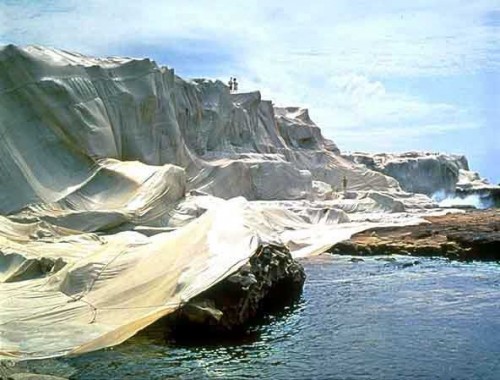 Detail of the coast of Australia.

As the Peter Pan, Boston to New York City express bus drove through Manhattan to end its journey in a dock at the Port Authority, briefly, the route passed Central Park along Fifth Avenue. It turned right through the Park before heading back downtown. For a few moments the passengers, most of whom were probably only vaguely aware of the work and identities of the artists, Christo and Jeanne-Claude, gasped as we viewed just a tantalizing glimpse of 7,500 orange, steel and fabric Gates placed every twelve feet along 28 miles of paths in the Frederick Law Olmstead designed, Central Park.
One clean cut young man looking like a recently minted MBA on his way to a job interview exclaimed loudly and negatively, “What a waste when there is hunger in the world.”

I tapped him to draw attention and then said, just as loudly, “Did you know that the artists spent all of their own money on this project? Some $26 million. Not a penny of tax payer money or corporate sponsorship.” That shut him up quickly. But everyone has an opinion about art. Especially public art. In class this week a student said that she thought it was “ridiculous” when I described the project which is up for just sixteen days. “No,” I said quite pointedly. “Art is not ridiculous.”

Well, I should have said, not this art. There is actually a lot of public art which is not only ridiculous but outright stupid. Like the Sheep in downtown Pittsfield last summer, each piece “decorated” local artists all for public amusement. Pane et circences with the artists as gladiators/clowns. Folks point out to me that the Sheep were auctioned off and raised a ton of loot for the arts in Pittsfield. That I should keep my damned mouth shut and not ruin the fun. If the good citizens want to love dumb ass public art then who the high falootin hell am I to argue matters of taste. Kitsch sells and every city now has its idiotic public sheep, cows, sharks, cod, gorillas and hermaphrodites. Why does that annoy me so much? Because, for the same time, money and effort that is spent to make the stupid sheep they could have really terrific public art. It just takes some imagination. Introducing the public to crap is not helping them to appreciate art, which is more challenging, but also more satisfying.

Even though Jeanne-Claude and Christo bring such magnificent work to the public on their own dime, that doesn’t buy them two cents worth of respect. Like the jerk on the bus. A surrogate for all that is vulgar and crass about America. The kind of folks now lining up to drool over the big red and shiny Ferraris from the Ralph Lauren brought to the MFA by that maven of the midbrow, Malcolm Rogers. Bet he would love to have the Pittsfield sheep grazing on his lawn along Huntington Avenue. What next Malcolm, the Eyeglasses of Elton John, or the Lingerie of Paris Hilton?

Every now and then Public Art transcends the norm and produces something truly magnificent. Then some guy from Somerville sets up a parody of The Gates in his living room, posts it on his web site, and is suddenly a global celebrity. Are his fifteen minutes over yet? Why do we insist on laughing at serious work? Let’s make jokes about the stupid Sheep, Cows, and Cod? But no, everyone takes that so damned seriously. Because, the idiotic argument goes, it’s bringing art to people who know nothing about art. Which is Malcolm’s rant about making the MFA more accessible by creating stupid shows for the masses. Hey, Malcolm, let them visit Disneyland. I though Boston had more taste, style and class. You know, kulchah.

Actually, it was all Astrid’s idea. She kept reminding me that The Gates were coming and only up for a couple of weeks. Yeah, I really wanted to see them. And yes, we will be in NY for a week during March, but right now, well, just can’t see how to fit it in with our schedule. So I was resigned to taking a pass on the experience. For lots of reasons.

Then, last week, she announced that she and a friend, Mary, were planning to see them in one day, down and back. Friday. Now I really had to make a decision as she has taken the initiative. We talked about the weather and our schedules. After running all the variables, Friday was the one and only possibility. I cancelled a class, which I hate do, and have planned a makeup, approved by my Chair. We kept a keen eye on weather reports. It snowed last Monday, a Holiday, which scratched that day. Then it snowed the night before our trip. Astrid shoveled the sidewalk at midnight when she got home from work.

We were up at 6:30. Packed, had breakfast, answered e mail and got the 10 AM bus to NYC. Rather excited. I caught up on heavy duty reading for my Integrated Studies class. We had a lunch of trail mix and peanuts. Got off at the Port Authority by 2:30. Shuffled over to Times Square and grabbed the rattler uptown to Columbus Circle. It was pretty incredible as we entered the far corner of the Park. There was a stand selling stuff. We bought a map but you didn’t need one. Or as one small fry skipping merrily along was singing, “Along the Yellow/ Orange brick road.” How Oz. Definitely an Ozzie moment. Seems that Christ and Jeanne-Claude do not make a dime on sales from posters to t-shirts. All of the proceeds are being donated to charity and the parks. This is a norm of how they operate.

There were some options to consider. There was a tram. The horse drawn carriages were doing gangbuster business. As was the Rickshaw guy. Astrid called him the Jigsaw man. I explained to her that was a malaprop. She is collecting unique expressions for later publication. Her sense of language is amazingly inventive. Most of all we were so glad to be there. It was a joy. Worth all of the effort. “We missed the Reichstag,” she reminded me. Could have stayed with relatives, Horst and Bettina. Later, when we visited Berlin I ripped a Christo poster off the wall and it is now a framed and treasured item in our collection. “Probably we will never have another chance to see a piece by Christo,” she reminded me.

It was challenging to decide just where to head off. For a while we walked along the main road but she wanted to find the road less taken to meander into little paths. There were thousands of people with similar ideas. Zillions of kids and school groups. Infants poking out of strap on harnesses, pacifiers stuck into their sucking faces. Like me being carried in mommy’s tummy at the 1939 New York World’s Fair. She visited dozens of time. Just about lived there and made incredible home movies, 16 mm, of the event. So perhaps this love of the spectacle is a part of my pre natal experience. Like those sucking infants growing up on the mother’s milk of a Christo installation.

Our wandering took us up some rocky hills to get an overview and make panoramas to be assembled later. And down, around the skating rink, and into a couple of the Park pavilions where they were selling Christo souvenirs.

The most fun was eavesdropping on conversations while the natives were acting cool and sophisticated. A lot of it sounded like captions from New Yorker cartoons. As they discussed and explained the work to each other. But there was really nothing to explain. It was all about looking at these virtually identical objects wandering off in all directions as far as the eye could see. Astrid shot a whole roll of film. Which for her is a lot.

The day proved to be just glorious. Yes, it was cold and crisp. Not too much so. There was fresh snow on the ground and the paths had some icy patches. The sun was shining brightly for a winter day. Overall, the Park has never seemed more glorious. Or ephemeral. As you read this, poof, it is about to disappear. Total Gonzo.

After a couple of hours we felt satisfied with an adequate grasp on the experience. We wandered out of the park and a couple of blocks away I spotted Carnegie Hall. “Would you be up for the Carnegie Deli,” I asked? I had the pastrami and she had the turkey, corned beef and tongue combo, dressing on the side. I photographed the daunting twin towers of lunch meat that arrived in front of her. What a good sport. She hauled two thirds of it home in a plastic takeout box.

But the pickles did me in. Gosh I love those pickles. Ate six or seven. Man did they make me thirsty on the bus ride back. Fortunately I had brought along a large bottle of Poland Springs. But as we neared Boston I was rationing sips like Bedouins at the last oasis. There were just drops to spare, lip wetters, when we arrived back at South Station just after 10 PM. Yeah. Twelve hours. Day trippers.

We were so happy. Mostly to have done it together. We missed Mary who cancelled at the last minute. Yes, it was great to see the work. Thanks Christo and Jeanne- Claude. It was also a celebration of our commitment to sharing a life in art. What a trip man. Groovy.


Back to Fine Arts Section Home