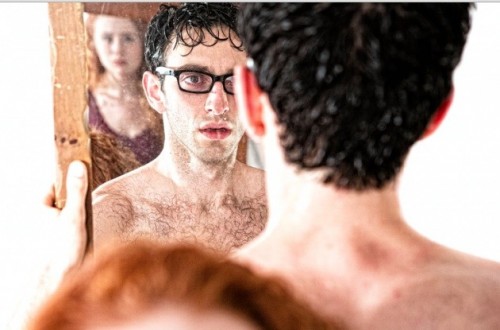 The end of a five-year relationship is portrayed 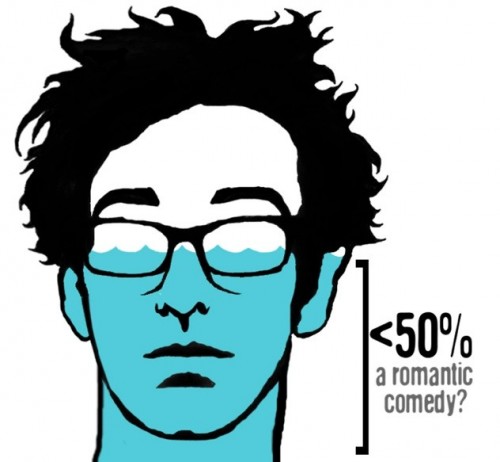 Not romantic, but about love and connection and desire

<50% is a drama formed and informed by one voice.  And wonderful, surprising and witty theatrical moment Gianmarco Soresi creates.  Part stand-up comic, part play in progress, part thought-provoking commentary about why love and marriage may not go together like a horse and carriage, the evening is charged by the brilliant performance of Soresi.  Equally compelling is his partner, Laura Catalano, who fleshes out the portraits and mini dramas Soresi tells as he weaves his web.

We learn Gianmarco's dilemma: He is putting on a Fringe Festival play that just might make it to the Fringe Encores (where the audience is sitting and watching) and then on to Samuel French for publication.  Of course, Gianmarco is not at all sure of this wished outcome.

Giancarlo and Laura met in an acting class, the core memory reference here.  They struggle for fame and relationship in a world in which the world love is dropped gingerly every other second -- 'hi, love.'  It is poorly defined.  Choosing love may not seem so risky to an actor, whose career has been chosen by every person within a stone's throw in cities like New York and Los Angeles.

"Only You" is the first song we hear, and is echoed throughout.

This is an entertaining struggle, but a struggle it surely is.  Gianmarco wants to make it as a writer and as a friend and liker of Laura.  She loves him.  He teeters toward her, fearful of the tie that binds. The ring on the fourth finger.  Any ordinary, conventional symbol not of caring, but of permanence.  Yet you can feel the draw.  These are two actors who lived together and tangled for five years and the thickness of their feeling gives a firm base to first class acting.

While bringing this romp to an end is difficult for Soresi, and pregnancy and birth are probably not necessary, the audience of all ages laughed heartily throughout the performance.

Bon mots abound:  "You need to make all your decisions before you are ready to make any decisions at all."  And "Never place a period where you could put a comma," , , , , ,

Fun.  Significant.  Worth working on,