Soundstage by Rob Roth at HERE 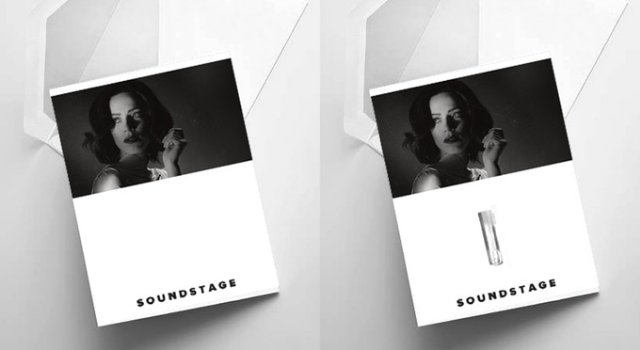 SOUNDSTAGE at HERE by and with Rob Roth and Rebecca Hall 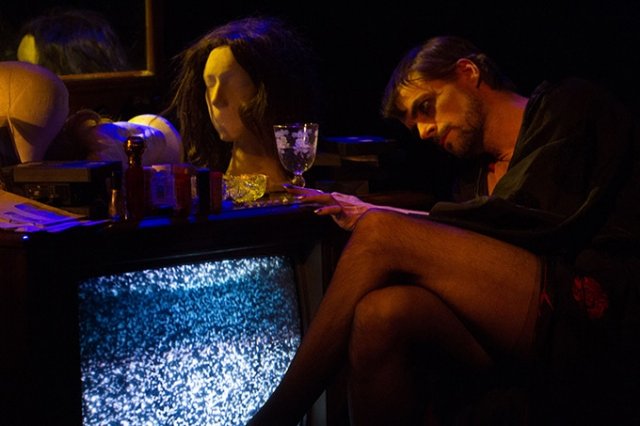 Rob Roth at his dressing table and as TV screen flickers 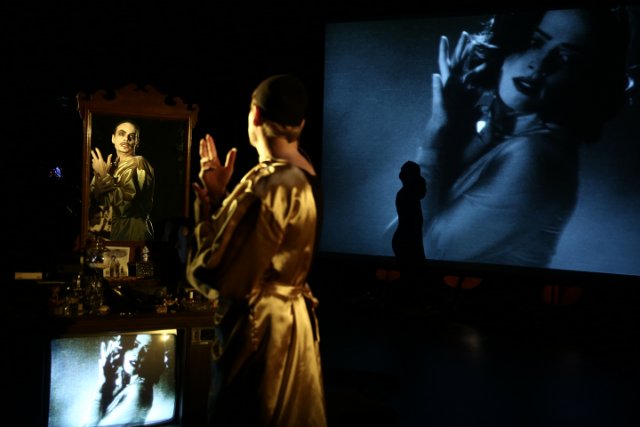 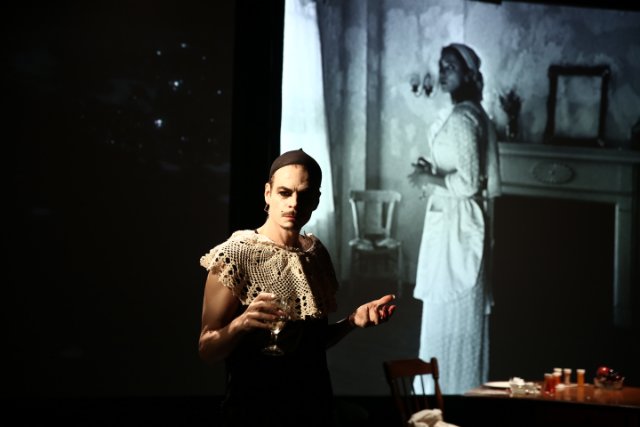 Sobering eyeing by Roth and Hall Photo by Paula Court 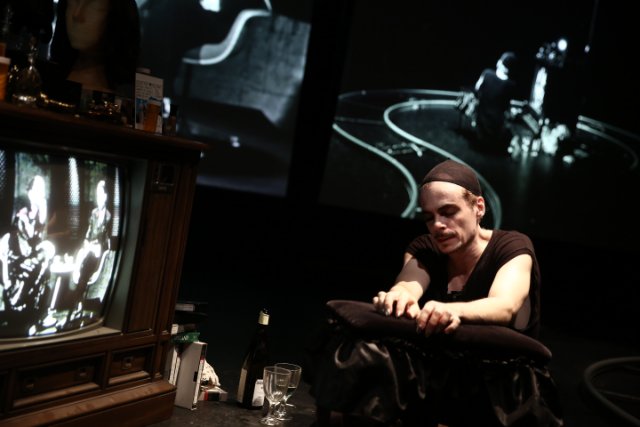 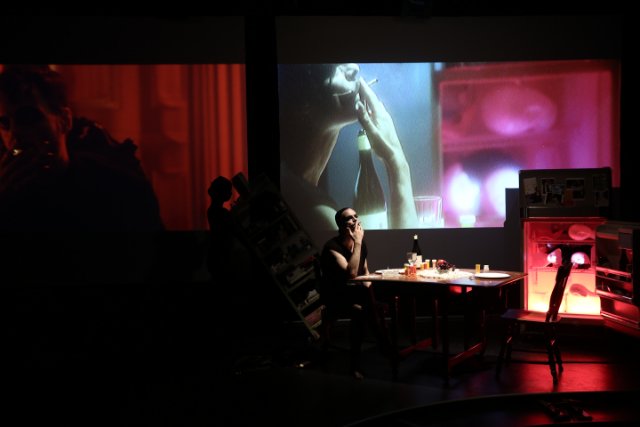 In the red film, the duo smoke. Photo by Paula Court 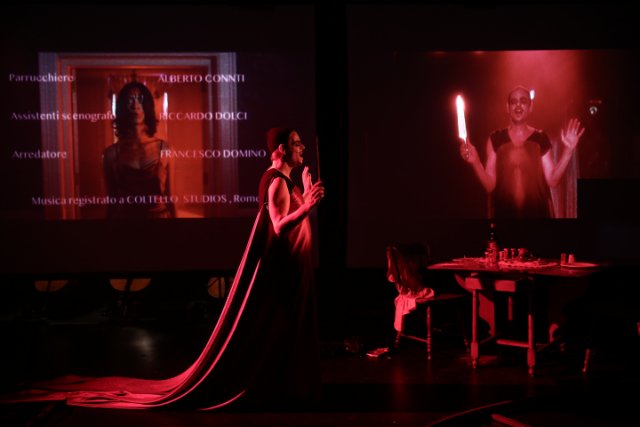 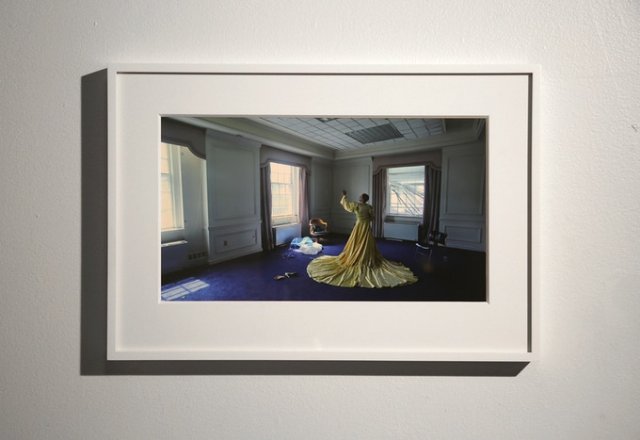 A glamorous scene in SOUNDSTAGE 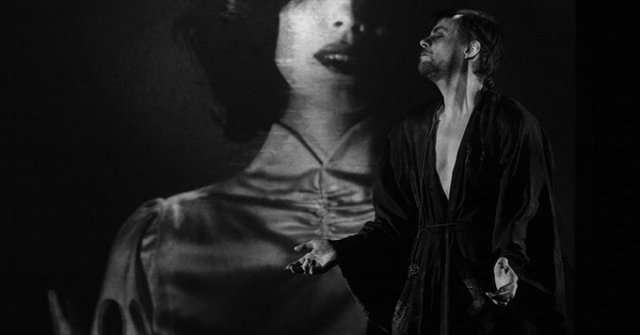 Star and fan grooving on each other 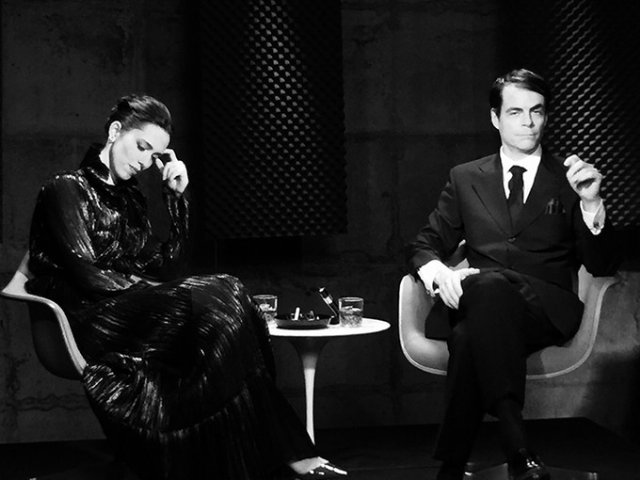 Hall reveals herself in an interview on screen 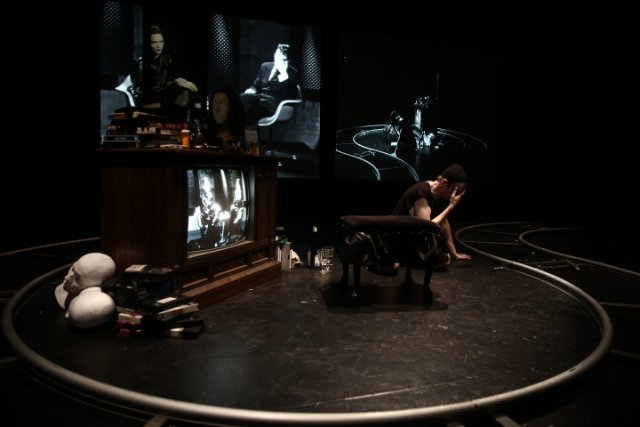 The interview Photo by Paula Court 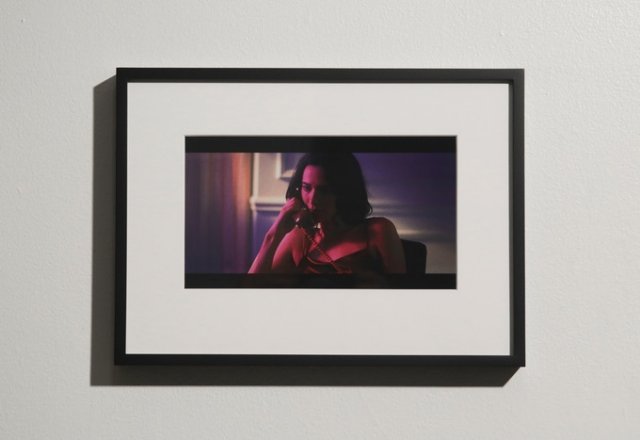 Hall on the phone with her fan

Soundstage by Rob Roth is playing at HERE through September 29. Using all the facilities that the grand HERE space affords, the production is first rate.   Although the author and lead actor Rob Roth identifies this as a queer vision, the piece resonates more widely.

The question asked is: how is loneliness overcome by out-sized personalities who often size themselves right out of the lives of their family and neighbors.

Rob Roth is sitting at his dressing table, perhaps at home, perhaps in a theater. No question this is his space. After painting ten glamorous fingernails, he pops a DVD into a player. The static on the TV screen becomes an image. This will be projected onto a large screen from time to time. Rebecca Hall’s on screen presence as a movie star is mesmerizing and multi-dimensional in its own right. She is dark-haired and blond, sleek and blousey, but always on point.

Another screen on stage reveals Roth. The actor is filmed by a camera mounted on a dolly,  traveling on tracks across the stage floor. The camera person and three assistants are dressed in skin-tight black, looking almost like aliens from outer space. Their function is never made clear. That makes no difference. They add a pleasing dimension.

The films that Roth reviews all feature Rebecca Hall in various roles. Sometimes Roth mimics, or becomes her voice as she speaks.  He transforms himself in a dressing gown, but never dons the wig which sits on a head model on the dressing table.

That head model comes to life for a moment midway through the evening, but you’re not sure how and ponder that live presence long after the show ends. You may find out that it's a projection. The screen views take place in red, yellow, white and black.

In a fascinating interview toward the end of the show, Hall makes a particularly revealing statement about over-the-top relationships. Just as she has entered the interior life of an over-the-top fan, he has entered hers. This is a mutually satisfying relationship and one that may soothe the loneliness of over-the-toppers.  Out-sized personalities feel too much for most people.  They become frightening and are often rejected outright. Sex with an over-the-top may hold a special allure, but when these personalities delve into pain, fear and hate, they are too much to bear.

Opera fans are familiar with this relationship. Roth has taken a step toward making the ’condition’ more comprehensible to outsiders. Divas and divos, glamorous movie stars of the past often occupy this role. Fans do too. This state may seem crazy to people who aren’t writ large by nature, but out-sized personalities contribute immeasurably to the texture of our world. Why shouldn't they 'merge' with each other?

Three cheers for Roth’s thoroughly engaging and multi-dimensional take on an outrageous relationship.