We Shall Not Be Moved Premieres

A Moving Hip-Opera at Opera Philadelphia 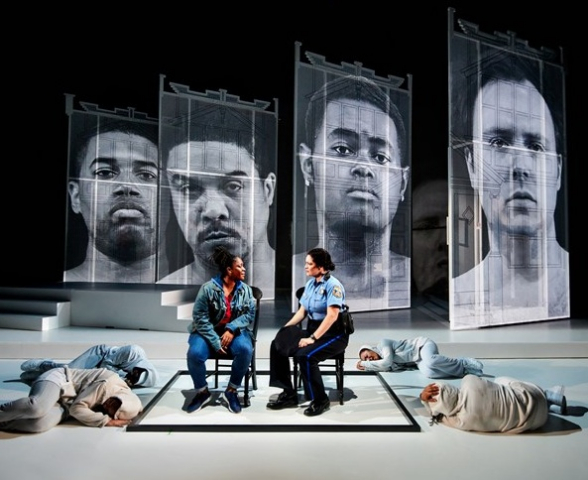 We Shall Not Be Moved, an Opera Philadelphia world premier

Opera reaches us at our deepest emotional level. It moves.

Should we distinguish Hip-opera from opera? We Shall Not Be Moved suggests we should not.

To attract audiences new terms may be used as a draw. In my experience with young people, once you get past the barrier of  ‘opera,’ kids are open to the experience. Boys who have seen Macbeth at its bloodiest, with Maria Gulighena in a white slip slipping off her shoulder and sex and blood center stage, can’t wait to return.

What would happen if youngsters told own story as We Shall Not Be Moved does? In 1985, devastated by crime and poverty, six adults and five children died in fires in makeshift homes in Philadelphia. Combining this event with the shut down of inner city schools three years ago, composer Daniel Bernard Roumain and librettist Marc Bamuthi Joseph have crafted what can only be called opera. It expressively combines music, singing, drama, poetry, plastic arts and dance. All human passions are at work. Bill T. Jones joined the project as ‘maker’, the man who helps bring disjointed parts into unity and life.

Opening night at Opera Philadelphia in the Wilma Theater across the street from the Kimmel Center attracted swank Philadelphians who make up the Opera Board, as well as  John Waters,  Bill T. Jones and the rest of the creative team.  It was deservedly a big event.

In the pre-concert lecture, we learned how local teens had been engaged to write of their experiences. Michael Butler, the head community relations for Opera Philadelphia, reached out to Art Sanctuary. More than thirty years after an unforgettable tragedy, its story is brought to stage. It honors the community and moves all of us to consider how we can help.

Opera cannot charge action, but it is a wonderful way to get an audience to feel an event. Did Verdi’s insistence on Italian nationalism have political results? You bet.

Selecting a Hispanic female police officer as villain is a stroke of genius. She is not white or male. Men are capable of emotional complexity, yet often find it harder to reach its center. Kirsten Chavez sings the difficult role with beauty and feeling.

Four high school students who can’t find a school to go to are confused and angry. Each tells a special story. John Holiday, the brilliant young countertenor who is also a superb actor, is remarkable. Pressing his gender issues is probably unnecessary. We clearly know who he is as he brandishes a gun. The minute notes emerge we can’t take our ears off him. This is also the case with Chavez, the Hispanic police officer. The composer acknowledges these talents with particularly beautiful singing lines.

Like Elizabeth Cree, whose silhouetted murder projections are black and white and then blood red, the colors of this set are dominated by black and white, the subject matter of the opera.  When blood is let and fires rage, red shockingly dominates.

The Golden Bride, a Yiddish opera performed at the Museum of Jewish Remembrance, also placed the orchestra behind the action as this opera does. Here a white scrim suggests the half-hidden instrumentalists. The music, a combination of jazz, rock, classic and hip-hop, bleeds through the whiteness, often landing on a dance movement on stage. Sets move with the music.

Particularly moving are moments which freeze on a gesture. This allows us to absorb the meaning of the story as it unfolds. You never sense that this is a series of tableau. Like a big painting hung in a gallery, they honor the experience of the opera’s characters.

A see-through mirror occasionally is used  to suggest that disparate worlds reflect one another. The Hispanic police officer loses her son during a rumble that goes ballistic. No one is exempt in race warfare.

Magical realism is dramatized by ghosts of the past that haunt these present young men. African Gods, the ghosts, appear to be on stilts, taller than the other singers, haunting them.

Opera Philadelphia provides  a matinee for youngsters during the festival run. The show moves on to the Apollo Theater in New York on October 6 and 7.  It is sold out in Philadelphia.

If opera is to have meaning and an audience in the 21st century, it must be embedded in the community. Opera Philadelphia has a firm footing in  communities it wants to serve. We Shall Not Be Moved evocatively conveys that commitment. We are moved.