The Goat, or Who Is Sylvia? 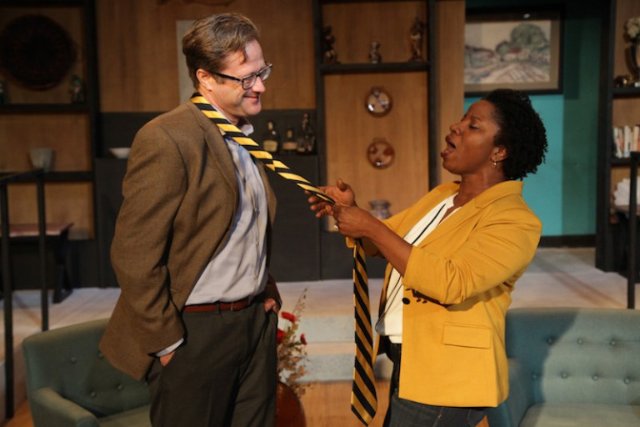 Edward Albee’s 2002 play, The Goat, or Who Is Sylvia, hasn’t been performed very often in Chicago. I told my plus-one, rather casually, that it’s a play about a man who falls in love with a goat. I said no more and she didn’t ask, but it turns out that she thought that sounded like a comedy. In fact, The Goat is a sad and tragic story about loves lost, lives upended and a family torn apart. Even though there are, of course, some ludicrous notes, the play is a tragedy. And Albee signaled that, when he subtitled his play, “Notes toward a definition of tragedy.”

The couple at the center of the story are Martin (Tom Jansson) and Stevie (Elana Elyce), married 22 years and parents of a gay teenaged son, Billy (Ryan Liddell). They’re typical upper-middle class liberals. Or are they? Martin’s anguish comes out early in the play, as he and Stevie have a casual conversation and prepare for a guest. Martin is stressed over his 50th birthday and symptoms of his aging. Stevie observes after an embrace that he smells funny. As she quizzes him about a suspicious business card in his pocket (“Clarissa Atherton: Basic Services”), Martin admits he’s having an affair with someone named Sylvia and “She’s a goat. Sylvia is a goat.” Is it a joke? Stevie thinks so.

Martin is interviewed by his friend Ross (Armando Reyes) a TV producer. Martin has just been awarded the annual Pritzker Architecture Prize, the “Nobel for architects” and has recently taken on a huge architecture and urban planning contract. (Many of my heroes are architects, so I am impressed.) These are distinctions that most people would be thrilled to achieve, but throughout the interview Martin is distracted and troubled. Ross tries to engage him in the interview but gives up. Finally, Martin blurts out the whole story to Ross—how he and Sylvia met—and who or what Sylvia is—and began an affair. Ross writes a letter to Stevie, telling her the whole story. It is no longer a joke. Martin and Stevie argue about his infidelity and Stevie becomes increasingly outraged, resulting in the breakage of a lot of living room accessories. Billy is distraught, seeing the end of what he thought was his happy family. Is Martin’s behavior ludicrous…pitiful? Yes and so is his description of going to a therapy group for people addicted to bestiality. He seems to feel sorry for them, but happy in his own love and the way Sylvia returns it.

What is Albee trying to convey in this play? The Goat has many layers of meaning. It’s not about bestiality; it’s about love and loss and how we define ourselves. Albee makes us question our own thoughts on social taboos. On the surface, Martin accepts Billy’s sexual identity, but it bothers him, even though he sees nothing wrong with bestiality. Stevie is upset about Martin having an affair but even more because that fact compares her to an animal, rather than to an attractive woman.

The Goat, or Who Is Sylvia? is certainly a problem play, in the classic sense in which characters debate critical social issues in a realistic context. Think Ibsen, “kitchen sink drama” and the socialist plays of the 1920s and ‘30s. Albee also makes many references to classical tragedy, literature and Greek mythology throughout The Goat. The name of the play, in fact, refers to a song “Who Is Sylvia?” in Shakespeare’s Two Gentlemen of Verona.

Yost’s directing is solid and well-paced. The four actors are a bit uneven in their performance. Jansson is fully immersed in Martin’s character and his every expression and gesture convey that. Elyce as Stevie performs at an over the top level in the second scene, but who can blame her? Liddell is believable as a troubled 17-year-old. Scenic design is by Kerry Lee Chipman with lighting by Richie Vavrina, sound by Erik Siegling and costumes by Melissa Perkins. The all-important property design is by Melanie Hatch.

The Goat, or Who Is Sylvia? by Interrobang Theatre Project continues through October 6 at Rivendell Theatre, 5779 N. Ridge Ave. Tickets are $32 for performances Thursday-Sunday. Buy them here or call 312-219-4140.