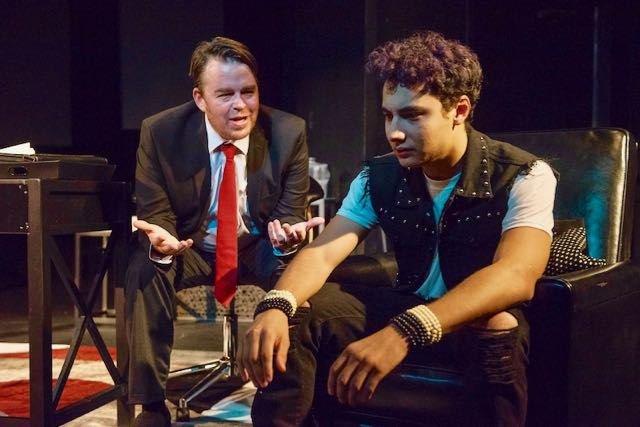 Ira Amyx and Joshua Zambrano as J.B. and Eddie. Photo by Michael Brosilow.

Monger at Her Story Theater

J.B. Benton (Ira Amyx), a lawyer in the prosecuting attorney’s office, is the central character. He’s working at home because his artistic musician son, 16-year-old Eddie (Joshua Zambrano), is suspended from school for beating up another student who had been bullying him. J.B., who drinks Scotch or vodka straight up throughout the day, checks in frequently at the monger website, frequented by men seeking teenaged girls for sex. (They call themselves “hobbyists.”) The chat transcript, projected on large screens, is graphic and ugly.

J.B.’s work for the day is a pre-trial witness interview that will decide if the case goes to trial. The witness is Ruth Edwards (Jamise Wright), the mother of Diamond Jones, a 16-year-old girl who was brutally murdered. The fact-based details of the case—including Diamond’s purchase by a pimp—are teased out chillingly.

Bonnett’s script is economically written, unemotional and loaded with devastating details. The three actors’ fine performances do justice to the script and Mossman’s fearless direction.

Monger is the fourth production of Her Story Theater’s Chicago Sex Trafficking Cycle. The other plays were Shadow Town (2013), The Johns (2014), and Money Make’M Smile (2017). Playwright Bonnett, artistic director of Her Story Theater, has created all four plays, based on actual Chicago crimes, interviews with victims, survivors and officials. The monger website transcripts are from an actual website. Much of this underage sex trafficking took place on websites such as backpage.com, which was shut down in April by the FBI and other agencies. However, similar websites still exist, based outside the U.S. The play’s title? The word is based on whoremonger.

Monger: The Awakening of J.B. Benton by Her Story Theater continues through September 30 at the Greenhouse Theater Center, 2257 N. Lincoln Ave. Tickets are $35 for performances Thursday-Sunday. Because of adult content and explicit language, the play is recommended for ages 16 or older.

In this professional premiere from the House Theatre of Chicago, a young woman called Cozbi (Tina Pinson) receives a distressing video message from her brother (Desmond Gray) and must venture deep into the dangerous underworld of an arctic oil rig to rescue him from an icy fate and corporate treachery.

Borealis is one of those productions that I wanted very badly to like. Eleanor Kahn’s set promises a unique and stylish experience upon entering the Chopin Theatre. With its looming walls and multi-colored hexagonal accents, I was given the impression of some sort of maniacal laser tag arena. And the pulsing pop tunes played for house music sets the tone for an energetic ride. The company, known for its imaginative story-telling and immersive spectacle, takes great pains in setting the mood— everything from the program (a dossier from the corporate overlords) and tickets (a stamped passport allowing entry into the restricted oil rigs of the story) adds a certain charm, but there seems to be some discrepancy between the world building that takes place before lights up, and the product that we witness once the play gets rolling.

While there are a few moments of interesting design and flourish, there is very little here that actually works from a practical or storytelling level. On opening night, actors and crew seemed to fumble with the more technical machinations of Monty Cole’s staging, dropping props or stumbling through a wobbly doorway or trying to cover an overlong scenic transition with feigned casualness. Dramatic steam is lost quickly too, as we barrel from one silly exchange to the next, none of which seem to express the danger or pace of a rescue operation.

Working from a script by Bennett Fisher, the storybook quality seems to borrow from the kind of whitebread satire of the Wizard of Oz or Alice in Wonderland—the oil rigs are an Otherworld, with inverted morals and nonsensical doublespeak, populated by snide corporate caricatures and lonely hearted cartoons with lessons and gadgets and helping hands to impart. Even deeper down the rabbit hole, some design elements seem to recall moments from (among other things) Miyazaki’s Spirited Away, itself a reflection of Lewis Carroll’s more fantastical creations. But this grab bag of ideas only serves to anchor the story enough to make it palatable. Frankly, Borealis needs work if it ever hopes to resonate deeper than a run-of-the-mill fairy tale.

The Shipment is a minstrelsy variety show with a sitcom finale. You’ll laugh, you’ll squirm, you may be puzzled. Young Jean Lee’s 2009 play at Red Tape Theatre is a gutsy, sometimes scatological, riff on racism, identity and white guilt. If you’re one of the (mostly white on opening night) people in the audience, you’ll find yourself uncomfortably facing your own biases. And that’s okay. In fact, that’s probably what Lee intended. The play is very moving and the playwright pulls no punches.

The playwright has said she forced herself to write the most challenging play she could think of as a Korean-American: writing a play about racism and identity politics. As she has done with  other plays (Straight White Men), she collaborated with the original all-black cast in writing The Shipment; she also often directs her own work.

Elegantly dressed, Sheldon Brown and Hunter Bryant perform a goofy, herky-jerky dance together and separately. Marcus D. Moore comes on next with his comic standup routine, which deals with sex, poop and white guilt and offers a surprising explanation for the use of plastic furniture covers.. Eric Gerard and Kiayla Ryann, along with the other three actors, perform a series of interrelated skits dealing with rapping, drug deals and life goals.

After a short break to reset the stage, what seems like a more traditional play begins, set at a party in Thomas’ (Gerard) apartment. His friends arrive (Brown, Bryant, Moore and Ryann) and discuss drinks, work and relationships, mostly in typical millennial fashion. They argue about the merits of Stanford vs. UC Berkeley. After significant drinking, they play a game called Library, in which the participants make up sentences that might be in a book chosen by the fifth player. The final lines in the play turn everything upside down.

Red Tape’s fine production is directed by Wardell Julius Clark and features five actors who play various roles throughout the 75-minute performance. Set design is by Joy Ahn, with lighting by Daniel Friedman, sound by John Nichols III, and costumes by Rachel Sypniewski. Breon Arzell is the choreographer.

The Shipment by Red Tape Theatre continues at The Ready, 4546 N. Western Ave., through October 13. Red Tape is part of the free theater movement, based on donations to support their work. Tickets are free; reservations recommended.

Frank Wedekind’s 1891 play, here translated into a contemporary rock musical, concerns the intellectual and sexual blossoming of a group of German high schoolers who are pained to find the world is much bigger and far more tragic than their parents or schoolteachers have let on. This inaugural production from Blank Theatre Company is a lively affair that captures the youthful and angsty essence of the source material, and serves as a showcase for Duncan Sheik’s excellent and moody alt-rock-inspired score.

Blank Theatre Company has assembled a group of exceptional singers who seem to relish the opportunity to tackle these heartbreaking numbers. Each vocal performance is expressive and full-bodied, and this bare-bones production gains much from the quality of these voices. Unfortunately, this polish doesn’t translate to the scenes of dialogue—director Danny Kapinos hasn’t seemed to figure out how to slide in and out of songs, or translate the energy from the musical interludes into the more traditional storytelling moments. Wedekind’s text falls flat in the mouths of much of the cast—it requires a deft sense of melancholy and humor, a sense that needs to be conveyed without the help of bittersweet strings, and the company can’t quite find the note. Though I also got the sense that this piece is working against itself from a conceptual standpoint—the music, as wonderfully emotive as it is, doesn’t seem to develop past mood, and I greatly missed some of the quieter, more nuanced moments present in the original play.

Even so, this is an engaging and sometimes beautiful offering from a new theater company. In the proximity of Jackalope’s Frontier Theatre, it is an up close and personal performance that seems newly relevant in the world of constantly changing sexual politics.