Stratford Festival of Canada to October 23 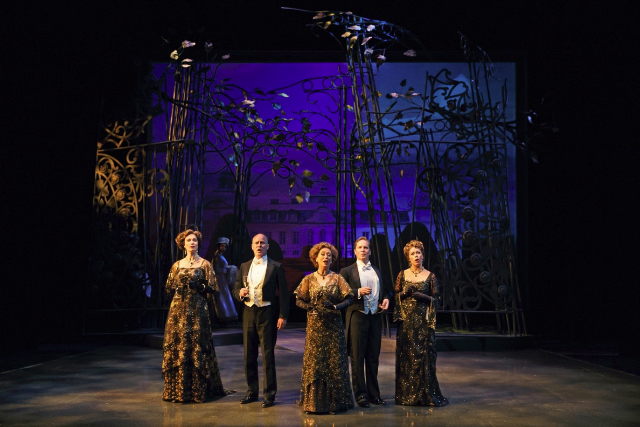 Stephen Sondheim and Hugh Wheeler created this witty, beautiful musical based on Ingmar Bergman’s masterpiece, “Smiles of a Summer’s Night” (1955), a top entry in most 20th century experts’ lists of the ten greatest films ever. So it is no small praise to note that many of us think the musical entirely worthy of its source. Stratford’s revival has its own eccentric elements but remains a first-rate entry in that complex artistic history.

The title is, of course, a literal English translation of Mozart’s beloved “Eine Kleine Nachtsmusik” – most accurately translated as “a little serenade” and about which we don’t know much: what occasioned it, when it was first performed, and by whom, etc. It was published after Mozart’s death, but it really fits this complex, subtle, offbeat, and entirely lovely musical. The delicate Mozart string-orchestra piece is as popular still as anything he wrote. And this medley of diverting love stories in appealing settings inspired perhaps Sondheim’s best and most varied score and continues to enchant widespread audiences.

The show has many short scenes and more than 20 different songs, so my description will be brief. As Madame Armfeldt tells her granddaughter, Fredrika, “A Summer’s Night smiles three times: first on the young, second on the fools, and third on the old.” So we see Anne, married at 18 to Fredrik for 11 months and still guarding her virginity. Her stepson, Henrik, a seminary student, is frustrated, ignored by everyone, and falling in love with Anne. Egotistic Count Carl-Magnus ignores his wife and is sleeping with the glamorous actress Desiree Armfeldt, Fredrika’s mother, who lives alone and is touring the countryside. Fredrik, Anne’s frustrated husband, visits Desiree who sleeps with him. A duel with Carl Magnus is in the offing. And they all wind up at Madame Armfeldt’s estate. Cue the song, “A Weekend in the Country.”

A quintet provides the overture and musical commentary throughout. And we see singers and dancers between scenes with the young, the fools, and the old mentioned above.

Gary Griffin has established himself internationally as an exciting director and re-thinker of staging musicals and has created a streamlined but very elegant production with Stratford’s great ensemble. Franklin Brasz’s conducting and musical direction sound superb. Designer Debra Hanson returns to Stratford with rather expressionistic but gorgeous designs, including what appears to be a huge oil painting of the country scene and gowns for the Quintet so grand and elaborate that they look more like a weekend in the emperor’s palace. Kevin Fraser’s lighting also varies from picturesque realism to exquisite fantasy, aided by Brad Peterson’s projections.

Juan Chioran looks great and sounds better as Count Carl-Magnus, getting all the necessary pompous humor, but still playing him much more appealingly than I’m used to. Cynthia Dale always looks exceptionally glamorous and sings like an angel, but she also adds some sharp humor as his Countess Charlotte. Gabriel Antonacci is appealing but not as funny as some Henriks I’ve seen, but he has a wonderful tenor voice. A legendary veteran actress, Rosemary Dunsmore, is touching and amusing as Madame Armfeldt – rather more patrician than the silly old lady that some noted actresses have made this role.

Sara Farb is amusing as Petra, the maidservant, and she really nails the difficult solo in which she resigns herself to “Marry the Miller’s Son.” She stops the show, but I’ve certainly heard it sung more prettily.

Beautiful Yanna McIntosh, stops the show as Desiree, of course, in the most famous song, “Send in the Clowns.” But she and the always splendid Ben Carlson as Frederik reprise it to sheer, satisfied audience pleasure. This is really a wonderful revival.