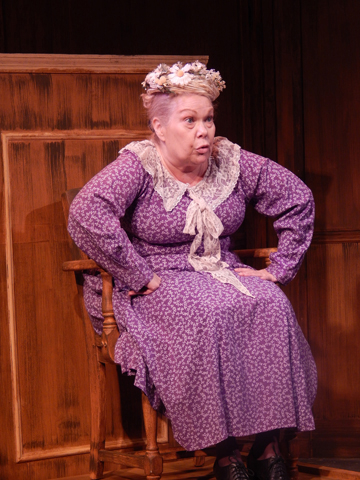 Is the meaning of privacy and what constitutes its “invasion” as black and white as, say, the definition of libel or the First Amendment’s guarantees?

The characters in Larry Parr’s sarcastically humorous, thought-provoking, meaty play “Invasion of Privacy” aren’t the only ones faced with these central questions.

We, the audience, are literally asked to ponder the questions while watching the true story. The production is on-stage through Sept. 25 in a mostly solid staging by Pigs Do Fly Productions at Wilton Manors’ intimate Abyss Stage near Ft. Lauderdale.

The second half of the play is set in a courtroom and involves a trial in which Pulitzer-Prize winning author Marjorie Kinnan Rawlings (“The Yearling”) faces a lawsuit for invasion of privacy and libel.

Parr’s play is accessible; it’s not flooded with technical, legal terms and his work never plays out like a dry transcript of a proceeding.

We’re drawn into the action, thanks in part to Parr’s stage directions. The audience playing the jury reinforces the idea that we need to seriously ponder the play’s issues; they’re as relevant to us as they were during the play’s setting, which is 1946 in rural Alachua County, Fla. and Gainesville.

Pigs Do Fly Productions is a small theater company that has, until this point, produced short plays featuring characters over age 50. “Invasion of Privacy” is its “first foray” into a full-length play, founder and artistic director Ellen Wacher announced before Saturday evening’s performance.

For its first attempt at a full-length play, Pigs Do Fly’s cast and crew do a solid job. In several aspects, the company deserves kudos, while other areas need work.

One of several smart choices made by director Peter J. Loewy is adhering to Parr’s request that the attorneys address the audience as though they’re the jury.

Loewy goes further than the stage directions; he has the actors playing the lawyers scan the auditorium, randomly making eye contact with and addressing individual members of the audience. The message is clear: We’re all guilty in one way or another of trampling on one’s private life or trying to censor someone’s First Amendment rights.

Today, when one can make information public with an instant message, tweet, or unexpectedly post photos of unsuspecting individuals on Facebook, our “private” lives hang in the balance. At the same time, when an influential parent, perhaps one who’s a school board member, can easily have a book removed from a class reading list or school library, First Amendment rights are violated.

While today’s technology obviously didn’t exist in 1946, one still valued his or her privacy and freedom of expression.

We see that clearly in the play, during which a resident of Cross Creek, Fla. (an unincorporated area in Alachua County near Gainesville) sued Rawlings for writing what the citizen deemed hurtful descriptions of her in the book “Cross Creek” about the residents’ lives. Rawlings lived in Cross Creek, wrote “The Yearling” in the small town southeast of Gainesville and felt completely “at home” there. That was true so much so that she didn’t think twice about describing Cross Creek’s residents, whom she considered close friends, in what she felt were honest, well-meaning if unflattering terms. But resident Zelma Cason didn’t appreciate being called a “hussy,” and sued Rawlings.

The play focuses on the events leading up to the trial and the proceedings themselves. In this neatly structured play, the first act involves the build up to the trial. Here, Rawlings, her husband, Norton Baskin and their attorney, Sigsbee Scuggs, debate whether to settle or go to trial. Rawlings also tries to make amends to Cason.

Parr doesn’t waste a word in his award-winning, lively play, which remains focused even while considering other issues. Women’s rights, depression, the question of what can be considered art and alcohol abuse are some of the other topics. But they don’t detract from the central story; they’re all neatly tied together. Would Rawlings appreciate it if a car accident, presumably from her excessive drinking, were made public? It’s a question Cason’s attorney, Kate Walton, the first female lawyer in Florida, asks Rawlings. Wouldn’t such a disclosure amount to an invasion of her privacy?  Would Rawlings appreciate people knowing about her dark spells, during which a wave of sadness washes over her?

Parr’s play also has its share of irony: By filing suit against Rawlings, Cason makes her life even less private – and brings more shame upon her. Cross Creek’s residents, who take Rawlings’ side, refer to Cason as the “bitch” who sued Rawlings.

Pepper Thompson plays the part of Cason. She and her five cast-mates overact at times, while during other moments, their responses to lines of dialogue come too quickly, lessening the spontaneous quality of their performances. But these are mostly strong performances that improve as the play progresses.

Thompson’s Cason speaks in a voice that might emanate from a less-than-scholarly person, suggesting an uneducated, unworldly individual living in a tiny, secluded, rural area. Her Cason casts suspicious glances at Rawlings and Thompson imbues her with indignation. Thompson’s Cason sometimes brings to mind Violet Weston, the uncouth, pill-popping matriarch of Tracy Letts’ Pulitzer Prize-winning play, “August: Osage County.” Her Cason, though, is not quite the “bitch” described in the play and so we don’t totally dismiss her or her feelings when she conveys insecurity.

Missy McArdle brings a convincingly sad, exasperated, weary aura to Rawlings, except when she’s talking about her love for writing. Her voice and facial expressions then take on a romantic, dreamy, enthused quality. In one scene, director Loewy has her caress her book as though it’s her baby. McArdle makes Rawlings one of the play’s most worldly characters. One knock on McArdle’s performance is her reaction is too mild when she learns Cason is suing her.

There’s great chemistry between Rawlings and her husband, played by Kevin Reilley as a less-sophisticated, common, caring, awkward but charming southern countryman. The two cozy up to one another convincingly, making us believe they’re a real-life, loving couple who’ve been together for decades.

Walton is deftly played by Julie Pisano as a woman ahead of her time, with an air of assertiveness, confidence and wariness. There’s a “Marian the Librarian” type suspicion in Pisano’s Walton during a scene with Rawlings’ lawyer, Sigsbee Scruggs. In the scene, he practically cozies up to her from behind (you almost get the sense here that Walton will accuse him of sexual harassment).

Speaking of Scruggs, Todd Caster brings a charming, colorful, optimistic, patient quality to this understanding attorney. He has a flair for being dramatic, unlike, say, “To Kill a Mockingbird’s” more subdued and well-spoken Atticus Finch. His Scruggs, who often speaks in a sing-songy voice, is quick with a charming, southern smile and accent (all the characters nail the southern drawl).

The judge overseeing the trial is John Murphree, played with a mixture of charm, firmness and fairness by Kerry Sensenbach.

The costumes are credited to Angel’s Theatrics & Costumes. The clothes are, for the most part, character-appropriate, although the flowery red outfit Rawlings wears at the beginning seems incongruent with her somber mood.

Sound designer David Hart also helps set mood, including one of a peaceful night in the country with realistic sounding crickets.

Jodi Dellaventura’s flexible, versatile set design includes a realistic depiction of Rawlings’ home. It’s not as detailed as described in Parr’s script, but it’s serviceable, accurately depicted and seamlessly changes into other settings, including the courtroom.

In the play, Scruggs notes that his opposing attorney is rather green.

Pigs Do Fly Productions, whose title stems from an interesting story, is also new to producing full-length plays. They show great promise in their first effort.