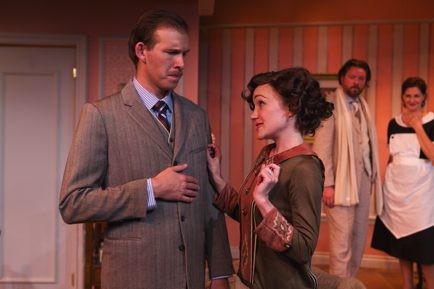 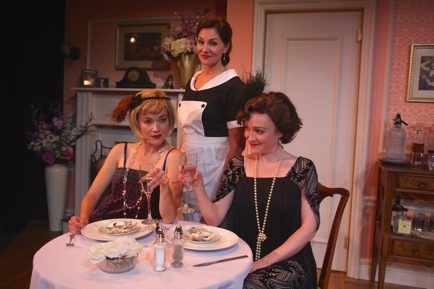 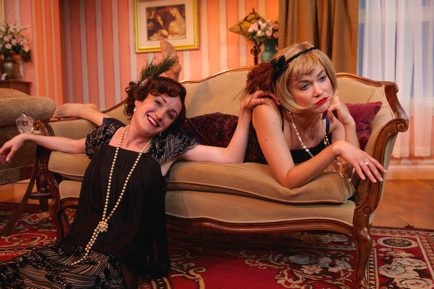 When a theatre decides to present a Noel Coward play be it in the San Diego area, or anywhere else for that matter, it had better have a director with the understanding and appreciation for the gifted and prodigious playwright (more than 50 plays), from Teddington, Middlesex England.

Coward was not only a bold and stylish writer of English drawing room comedies and dramas  of wit and bite, he was also an equal opportunity offender; skewering England’s upper class society in particular –  a class he yearned to join, and eventually did, becoming Sir Noel Coward in 1969.  He more than most playwrights of the 20th century best understood and reflected the uniqueness of his fellow countrymen; presenting their quirks and idiosyncrasies, warts and all, as well as focusing on their finest hours; becoming rich and famous in the bargain.

Reynolds, an actor/director and Coward aficionado, has her creative fingerprints all over this entertaining and stylishly directed comedy that is chock-full of deft and inventive directorial touches.   The production also is blessed with a cast that knows its way around English drawing room farce when they find themselves in one. More about them later.

The story in short, set in the Jazz Age, is about two wealthy upper-class young women and their two clueless husbands.  The bored wives whose home sex lives have stalled after five years are tempted and energized by the news of the return to England of a former French lover who bedded them both before they were married.  This is fertile ground for Coward to mine the “seven deadly sins” on stage, and he does so with verve, style, and panache.  Toss into the mix a dry-witted, scene-stealing house maid who apparently is always right on all domestic issues, who, at times, plays and accompanies herself on the baby grand piano in the living room, as well as serve the meals.  Well, when that happens, one has a recipe for a madcap evening of comedy/farce.

Julia played by Joanna Strapp, is the personification the typical bored female Coward leading lady: spoiled, attractive, rich, lithe, liberated, and ready for an adventure.  The timber in Strapp’s voice sends sultry signals to any within earshot, but one has to be listening.  It’s a finely judged performance underscored by impeccable timing.  Summer Spiro playing best friend Jane, is a bundle of bored energy as well, but has a penchant for martinis that soon gets the two women involved in a classic drinking scene that is one of the highlights of the evening.  Strapp and Spiro have wonderful onstage chemistry that has them feeding-off each other.  It’s a delight to watch them work.

Jacquelyn Ritz as Saunders the maid, shines in her scene-stealing moments, when singing and playing the piano in front of guests, much to the chagrin of Julia and her husband, stick in-the-mud, Fred played with controlled frustration by Thomas Miller.  Jane’s priggish husband Willie played by Jason Maddy is appropriately aghast at the shenanigans going with their two wives while he and Fred have been golfing all day. I last saw Maddy in SD REP’s excellent production of “Red”.  His co-starring portrayal there is 180 degrees opposite from his Willie character in “Angels”.  As for the mysterious French lover Maurice Duclos played by Richard Baird, Maurice only makes one entrance at the end of the play, but we couldn’t say good night without him.  All the men have their moments, but the evening definitely belongs to the ladies of “Fallen Angels”.

In the technical credits department, director Reynolds leads a creative team consisting of Scenic Designer Marty Burnett, who provides a rich looking London apartment, with plenty of space for the actors to perform their magic.  The lighting design by Matt Novotny complements the costumes of Alina Bokovikova.  Also, it’s always nice to see attention paid to the little details like real tea sets and spot-on props, plus lights that can be seen when doors open in the daylight or when characters leave a room. Very few people in real life just wander off or exit into darkness.   Small details like these are what separate good shows from great shows.

The North Coast Rep Theatre begins its 33rd season with a thoroughly splendid and entertaining production of Noel Coward’s “Fallen Angels” that runs through September 28, 2014.  Don’t Miss It!