Guess Who's Coming To Dinner At Huntington

The Very Human Pain of Confronting the Us and the They 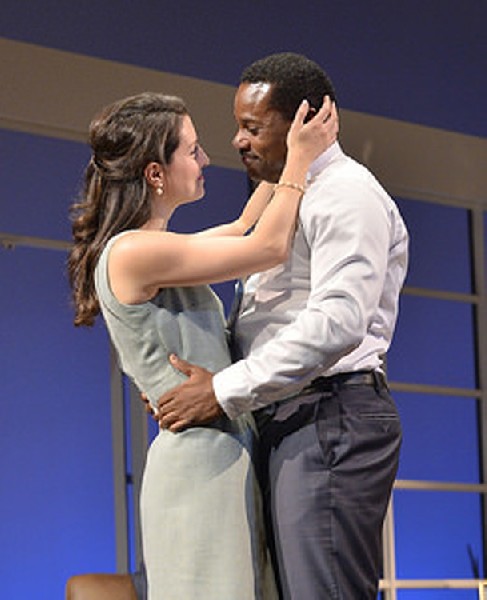 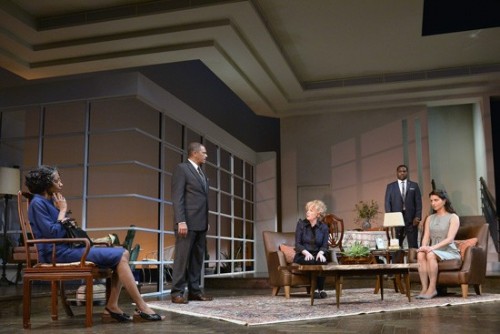 At the height of the Civil Rights Movement, the 1967 Oscar-winning film Guess Who’s Coming to Dinner opened in limited distribution nationwide. Many movie houses in the South refused to show it, fearing not only backlash from customers but perhaps even riots and violence. The plot involving a controversial interracial love story struck a nerve.

History tells us that the film was released just six months after the Supreme Court had struck down anti-miscegenation laws in the landmark Loving v. Virginia decision abolishing state laws against interracial marriage.

Nearly 50 years later and with a Black President in his second term in office, racism still too often sticks its ugly head up in situations like the shooting of Michael Brown in Ferguson, Missouri and the 2012 Trayvon Martin shooting in Sanford, Florida. So this play by Todd Kreidler based on William Rose's original screenplay still somewhat resonates.

However, there is a question of contemporary relevance of the play’s plot. There are a number of obvious clichés sprinkled throughout, some heavy-handed dialogue and too easy entrances and exits. In a way, half a century after it was first produced as a movie, this play is often more historical artifact than 21st Century art.

Even though set in the ’60s and rather true to the film, this play focuses on race in more indepth ways. Also, rather than  a star vehicle, Playwright Kreidler develops each of the characters more fully. In fact, he thoughtfully tinkers with the previous characterizations, especially the paragon of Dr. John Prentice.

He ruffles feathers and melts a lot of the cool of Sidney Poitier's movie portrayal in the recreation of the character. Here Malcolm-Jamal Warner's underplayed but brilliant Dr. Prentice demonstrates a person with flaws and nuance. Mr. Kreidler also gives a strong sense of purpose and humor to Tilly the maid/cook (perfectly captured by Lynda Gravátt) as well. Cleverly presented, she is in her own way a Greek Chorus to the storyline.

As an exemplary ensemble, the actors create a cohesive whole. Meredith Forlenza plays naive Joanna Drayton as a bit of a clueless character but strikes a strong optimistic tone without overdoing it. The doctor’s parents, played by Adriane Lenox and Lonnie Farmer are pitch perfect, dignified and realistic. The obnoxious, bigoted art dealer Hilary is portrayed wonderfully by Wendy Rich Stetson. Will Lyman's Matt Drayton was superb. As an actor, he is like a fine wine that gets better with age.

Chewing some of the scenery is Patrick Shea's family friend Monsignor Mike Ryan. In his boozy asides and red faced pontifications, he often steals scenes. Unfortunately, Father Mike is a dated, even clichéd character as written, the avuncular Irish Catholic priest with a fondness for his well supplied scotch.

Sprinkled throughout the production are provocative statements. Several are one liners by Tilly. Most egregious was by Hillary when she suggested that delay would put off the romantic arrangement and "the chocolate would lose its flavor." The most poignant and knowledgeable statement was made by Mr. Prentice, Sr. While he sat outside the Drayton house in his car, he realized that he might be suspected of being a burglar in the all white upscale neighborhood, so he came back into the house.

Stagecraft at the Huntington is usually quite wonderful. With a beautiful set of interior and exterior scenery and furniture and a terrific turntable, the scenic design by Dane Laffrey, is both elegant and versatile. Strangely, even though Christina owns a gallery, the Drayton house lacks a single work of art on its walls. What is that about?

The costume design by Paul Tazewell captures the period beautifully for the women, but a bit less so for the men. Bold rep ties and buttondown shirts were worn in the '60s by educated, powerful men like the doctor and the newspaper publisher, but not here (Mad Men has gotten it wrong for years about this as well).

Lighting design by Allen Lee Hughes was beautiful and added visual quality and punctuation to the narrative. The silouetted vignettes that often opened scenes were very symbolically subtle and visually evocative. However the sound design by Ben Emerson was often ineffective. Especially during the first act and a few times in the second, dialogue was lost to many in the audience. We could not hear many lines. Perhaps the hard surfaces of the set caused some of this?

Guess Who's Coming to Dinner is an unusual piece of theatre. The play seems somewhat dated, but still has resonating themes and social issues. In a beautiful setting, the cast members of this show are all splendid. Collectively, the audience seemed to enjoy the humor and the drama immensely. Likable liberalism with predictable humor. No contemporary layered conflict. But, the question is whether this play will become a modern classic menu entrée or just a theatrical cliché snack?