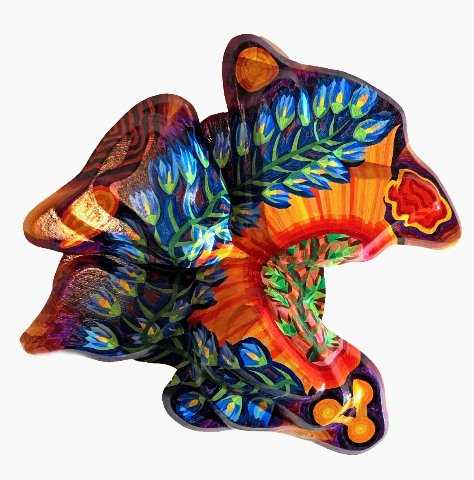 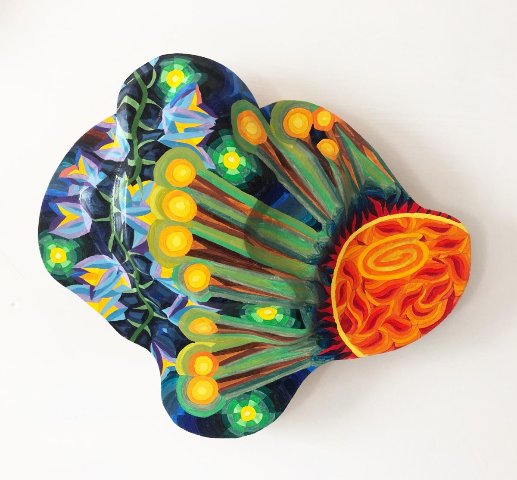 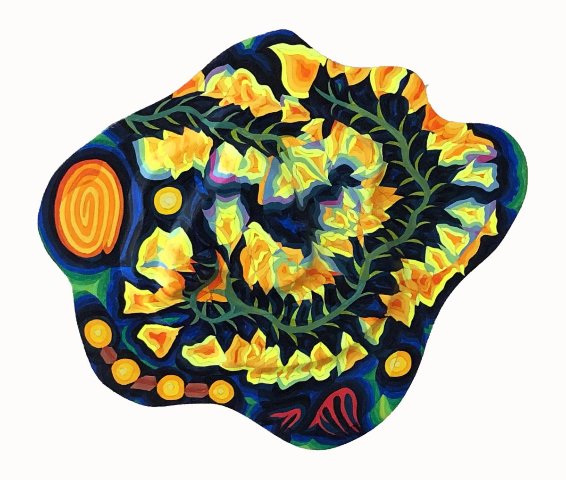 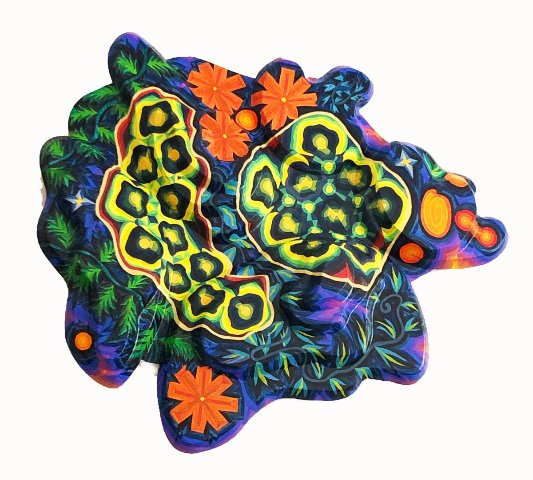 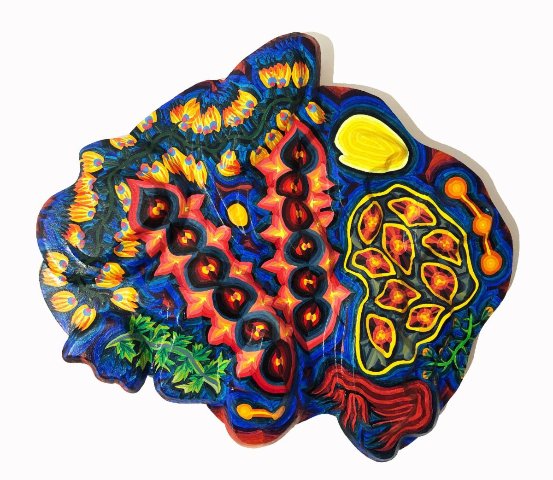 My work utilizes structure as a vehicle for energetic movement. The work is boldly color-saturated and organic. Forms point upward or sideways from a centrifugal base, hunting and seeking. Tides of observation and transmission approach and recede, leaving visual patterns in their wake. There is a conversation with the unknown taking place on and beneath the surface. Ancient symbols make their way across pathways of energy, co-existing with forms of nature; earth, sky and all types of elemental forms are born of essential vibration.

The paintings are done in gouache, and start as a need to work as if untying a complicated and seemingly impossible knot. The work starts from automatic drawing, releasing form and shape from movement. The forms are immediately organic, swirling and undulating from one end of the surface from the other.  The contour of a shaped panel is interconnected with the contained elements’ movement and energy, seeming to press the edge into the irregular shape. The shaped edge becomes not only the binding force of the surface, but also a means for the direction of the formed elements. Some of the pieces are built up in sculptural ziggurats, with forms making their way through depths and valleys. Some reflect the night sky in contrast between objects and their relation to space.

The paintings address the puzzles present within consciousness and its reflection in what appears through the senses.  Both inward and outward are the mechanics of duality, vibrating between intention and those of magnetism. Existing are drifting pockets of chance, coming together in an ocean of predetermination. My work casts shadows within these planes of energy.

I have been working on sculptural surfaces for my paintings for 6 months. In addition to the resulting surface tension, the work has become more lyrical, sprinkled with recognizable imagery. Vines, galaxies, probes, suns, microbial animals and plants divide the surface and define the space.

I have taken to meditating and musing through a pastoral view in an urban setting – one in which branches and boughs are superimposed on one another, creating a depth of field that continues forever. I watch the light move slowly over the trees, birds alighting, squirrels running up and down tree trunks. I watch in the morning, the afternoon, and the evening. I have noticed the wind lightly blowing through the boughs and saw that my sculptural painting surfaces were similar undulations of this motion. Forces of energy in the natural world create an ever-changing panorama of unfolding.

Recently, a trip to the Woods Hole Oceanographic Institute revealed the existence of differentiated flora and fauna swimming, crawling and hiding. I immediately recognized the shapes and energies of them as akin to the shapes that have been coming to me in my latest paintings continuously. Discovering Ernst Haeckel’s “Art Forms in Nature” brought the realization, as an artist friend so perfectly said, “All this time I thought I was an abstractionist. Turns out I’ve always been a realist”. The multitude of differentiation present in nature, and that of the mind’s eye is travelling from the same place and arriving to the same destination.