Britten's Billy Budd Based on Melville 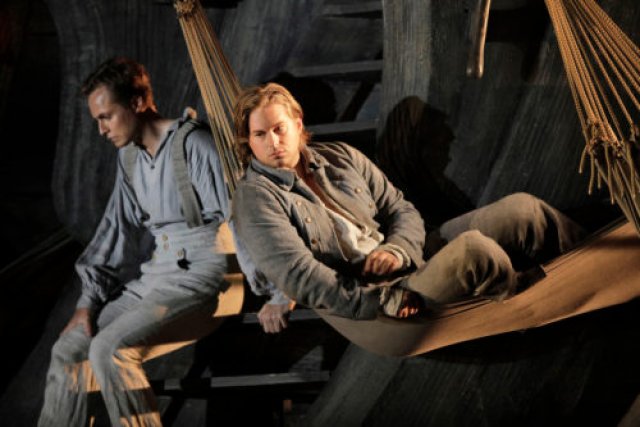 In the world of Herman Melville, good is never perfect, but always flawed. So it is with Billy Budd. A young man of kind heart and uncommon innocence, his personal makeup is fractured by a stutter. And while he is of gentle and simple disposition, a single, spontaneous act of violence would prove his undoing. Composer Benjamin Britten and his librettists E. M. Forster and Eric Crozier capture the glory and the downfall of this character in a compelling, but imperfect, opera that has rightfully worked its way into the repertory.

The nexus of the storyline concerns the tragic intersection of three divergent characters. At the opening of the opera, the protagonist Billy is impressed into British naval service from a merchant vessel during the Napoleonic Wars. In keeping with the theme of defective goodness in the world, the vessel he is seized from is named Rights of Man. Although the libretto gives little illumination of Billy’s goodness, he is loved by all from the start. Even the evil antagonist, Master-at-Arms Claggart, declares on initial inspection that he is one in a thousand.

In an unusual twist, the role of the young, angelic Billy is written for a baritone. John Chest portrays Billy ably with warm tones and open armed gesticulations. Though his voice is generally strong, he was overpowered by the orchestra and chorus in declaring his support for Captain Vere with “I’ll Follow You.”

The seamen use surprisingly affectionate terms for mates such as beauty and baby. Claggart’s effusiveness for Billy, however, suggests obsessive affection. Claggart is mean and controlling, and though able, he is universally disliked. Perhaps knowing that he can’t have Billy, he sets out to destroy him, because he has the power and position to do so. A mainstay at San Francisco Opera, Christian Van Horn excels as the dark, looming, and imposing villain. His menacing is well conveyed through his vocalizations and his swarthy appearance and affect.

Conversely, Captain Vere is well liked and respected by all of the crew, even though he allows brutal and unnecessary punishment. A man of letters and great sensitivity, often bordering on weakness, in a different way, he is even more conflicted than Claggart about Billy. As he notes, he is the king aboard his vessel, the ultimate arbiter of the fates of his men. William Burden is a remarkable fit as Vere, who many would consider the central character of the narrative. His tenor voice expresses Vere’s humanity throughout with great clarion tone and clarity of diction.

The opera reveals the tensions among the three lead characters as well as the other men on the ship. The frustration with the monotony at sea is depicted in action and in music with rumbling and dull repetition. Flogging, bad food, rumor, and betrayal are constant companions, though the mood is occasionally lightened with sea shanties that lift the spirits of the men, including the lively war ditty “Don’t Like the French.”

The music of the opera is among Britten’s most appealing. He uses full orchestration with lush sound that sometimes belie the underlying gloom. But the aural palette often becomes more ominous with the clash of half note sequences and other dissonance.

Meanwhile, the libretto accents the stress points well, though the timing often appears incongruous. For instance, Claggart’s seemingly sincere praise of Billy is betrayed in heartbeat when he seeks to undermine him. The length of the opera at three hours becomes burdensome. The pace of the second act slows, yet paradoxically, the critical events surrounding the accusations against Billy Budd and their aftermath are quite compressed.

Michael Grandage’s production has been revived several times since its inauguration almost a decade ago, and it’s easy to see why. The staging is sensational, dominated by the depiction of the innards of the man o’ war. The beautiful symmetry of the graceful curved lines of the structural bones of the ship create a stunning look and provide the basis for minor adaptations to transform the one set to other venues. The overall look of the set is grand, and the same time oppressive and claustrophobic when the fretwork of the upper deck is lowered to almost crush the ship’s interior.

Although Billy Budd underwent revisions after its debut in 1951, it is surprising that the American premiere didn’t occur until 1970. Since then, it has been recognized as a masterpiece deserving of its place on the opera stage.