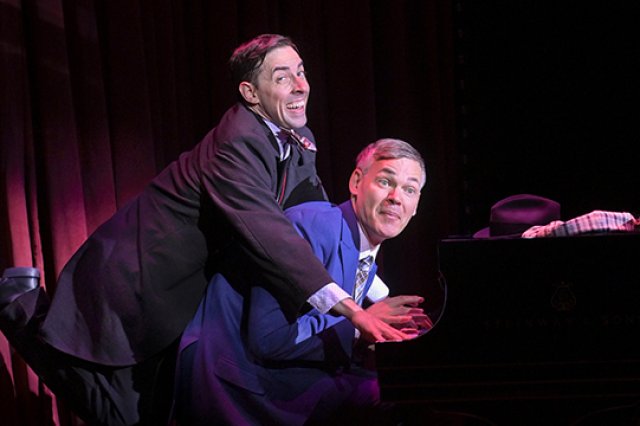 Rarely does a small town cop like Marcus Moscowitz have the opportunity to investigate a murder. But when mystery writer Arthur Whitney is shot dead in his home, Marcus insinuates himself into acting as a detective and interrogates the author’s guests, all of whom are suspects (note that the dialogue in the play corrects grammar from who to whom several times!). The result is a Center Rep production that is a laugh-a-minute, two-person musical farce that will tickle the funny bones of most audience members.

As a comedy-mystery, the viewer will probably see influences in the plays of Agatha Christie, Pink Panther, Irma Vep, and every other familiar source in the related genres. But in a conceit that distinguishes Joe Kinosian’s Murder for Two, all of the suspects are played by one performer who bounces among the various personalities, without the benefit of wardrobe changes or body adornments.

Each of the two actors’ performances calls for an abundance of skills – comedic acting, singing, and professional-level piano playing, as the two actors accompany themselves through more than a dozen songs that provide additional laughs and advance the storyline.

Eric Van Tielen plays the single role of Marcus adroitly, bringing all of those skills to the table, and providing a foil to each of the eccentric, physically identical suspects. Eric Shorey plays the 13 suspects which include women and children in a tour de force.  Using voices, accents, mugging, and well-choreographed movement, including an array of ballet and flexibility moves, Shorey carries them all off with great nonchalance. His versatility and the distinction among his characters is quite an achievement, while the onstage chemistry of the two actors adds synergy.

The plot is nearly inconsequential. The biggest challenge to the viewer is absorbing all of the guests as they are introduced based simply on Shorey’s voice and gesticulations. Unsurprisingly, we learn that all of the guests have a motive to murder the host, but the process of eliminating suspects lacks ingenuity or gravity. The action serves more to allow the suspects to reveal their divergent characters – the wacky widow, the bickering couple, the self-indulgent ballerina, and so forth. The musical numbers are tuneful and funny but not significant, though the recurring “Protocol Says” does serve to keep the officer on track in his investigation. All of the creative staging elements contribute to serve the story well, especially an oft-used bookcase with a hidden revolving door in Bill Clarke’s set.

It is important to note that while this is a well-crafted production of a well-designed and recognized work, it is not for everyone. For theater goers seeking fast-paced, forget-your-troubles entertainment, it will probably fill the bill. For those looking for meaning, social commentary, complexity of character, and the like, it may not fill much of anything.

Murder for Two with book and music by Joe Kinosian and book and lyrics by Kellen Blair is produced by Center Repertory Company and plays at the Lesher Center for the Arts, 1601 Civic Dr., Walnut Creek, CA, through October 6, 2019.