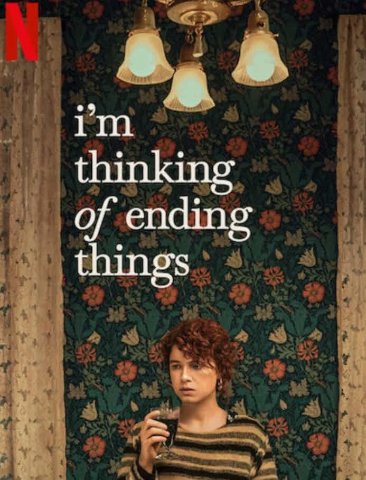 Jake and his ersatz girlfriend. 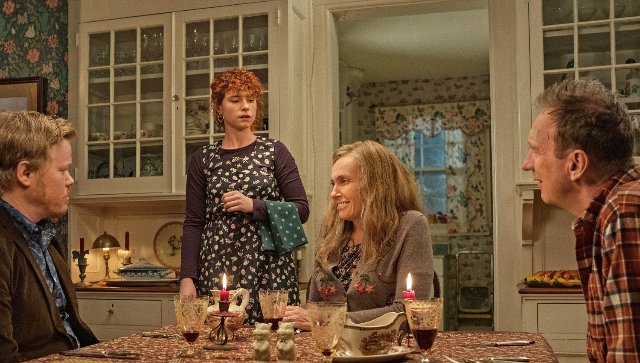 How did you guys meet the parents ask? 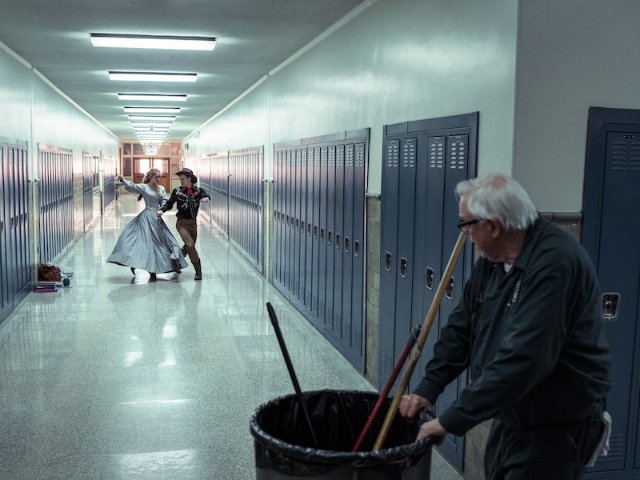 Janitor and ballet from Oklahoma.

Another confounding film from Charlie Kaufman.

Although it is a thin year for cinema, already critics are touting Charlie Kaufman’s “I’m Thinking of Ending Things” for the short list of “best of.”

While slow, and intriguing it’s a bit of a head thumper. Now streaming on Netflix this should be seen at least twice. The first time for full immersion in its cockamamie, what the heck, twists and turns.

Then read the reviews that attempt to deconstruct its many intriguing but arcane references. One scribe suggests hitting the pause button  then google the daunting array of literary and pop culture vectors.

Anticipate being confused, but if you know the work of director Kaufman, that’s the fun of it. Expect something along the line of his Synecdoche, New York, Eternal Sunshine of the Spotless Mind, or the cult classic Being John Malkovich.,

Expect the unexpected. Embrace the unknown and pay homage to artifice and the higher power of  mid-pandemic deconstruction. If Covid has been driving you to despair and madness this uncanny film will push you over the cliff.

The protagonists Jake (Jesse Plemons) and his relatively recent girlfriend, who has multiple names and personas (Jessie Buckley), are driving through a blizzard to his parents on their remote Oklahoma farm. It’s a road trip from hell with an ending somewhat like Thelma and Louise but more surreal.

There has been much speculation that post-pandemic, and nobody knows when that will be, the arts will morph into something different. The paradigms will have been destroyed and audiences must toss out the playbook. In that regard, this disturbing, insightful film may be a preview of post, postmodern cinema.

While odd and confounding for most viewers, there are roots to this dauntingly disorienting art form. On the one hand it feels fresh and avant-garde, but also rooted in the early surreal films of Bunuel and Cocteau as well as theatre of the absurd Beckett, or the existential plays of Genet, Camus and Sartre. The characters also reference the Situationists like Guy Debord.

I kid you not. This is heady stuff for a couple of kids driving through snow for dinner with the folks, There are lot of clues embedded into the sets. Most importantly, during a visit to Jake’s boyhood bedroom. There are clues hidden in plain sight entailing stacks of books and DVDs.

In one confounding sequence, Jake and the girl, let’s call her Lucy, passionately debate the John Cassavetes film Woman Under the Influence. We have been led to believe that Lucy is perhaps a scientist, poet, landscape artist, waitress or student. She insists on getting back home that night, a plot point, because she has to work on a paper. He reassures her that he has tire chains and will get her home on time.

With seemingly angry passion, rebutting the remarks of Jake, she launches into an amazingly articulate and complex screed about the film. Where the heck did that come from, we wonder? Film sleuths have outed that she quotes verbatim from the review and pan of renowned former New Yorker critic, Pauline Kael.

There was a collection of her reviews in Jake’s room. As one smarty pants critic smugly observes, the wrong volume. The Cassavetes review is in another collection.

It seems that Kaufman is messing with us. Big time.

As a kind of gonzo riff and goof there are all kinds of tropes lifted from familiar genres, from horror and fantasy films, to Broadway musicals. They are, however, distorted just enough not to resonate and bore as clichés. There is a bit about the girl having to go down to the spooky cellar. Where have we seen that before?

Kaufman has assembled a stunning cast. We get the full impact of that during what has to be the most dystopian ever family dinner. So much so that they never seem actually to eat. There is the familiar question of “how did you meet?” There is an awkward answer but the truth may be that perhaps they never did. Jake a simmering, understated, handsome but awkward bloke lacks “the knack” with girls. Perhaps Lucy is a composite of his fantasies of girls he met but never got to the next step with.

In a NY Times feature about the film the actors are quoted as asking the director what the film was about? It seems they never got an answer, nor do we. Either we haven’t a clue or a shit storm of them. In this case, arguably, a blizzard of misinformation in a labyrinth which we navigated with an existential, Sartrian No Exit.

As Tennyson put it "Ours is not to question why but to do or die."

Plemons told a reporter that he understood what he was doing regarding the complex, multi-valent character, but feels “uncomfortable” when watching the film.

Imagine the struggling actors asking "What's my motivation in this scene?" Here, indeed, method is the madness.

Hey dude, I know what you mean.

You will recognize the actors from other work. Thewlis, for example, will be familiar to Harry Potter fans.

Perhaps you will know the remarkably understated performances of  Plemons from the last episodes of Breaking Bad or a season of Fargo. He is a master of seeming to do nothing which in fact is exceedingly difficult. The actor conveys an aura of somnambulance.  During dinner, when his folks rake Lucy over the coals, we have all been there and done that, he just fumes with inner rage. Several times in the film he has brief but violent outbursts.

In the end who the heck is Jake? Is he in fact the janitor (Guy Boyd) who late at night mops the floors of the highschool? What’s a bit with Oklahoma and ballet pas de deux amid rows of lockers? Or the Nobel Prize speech?

In this film there are more questions than answers, Which is why you will have to see it twice, or perhaps more. As Plemos put it, there was a lot of reading to prep for this film. Dealing with Kaufman feels like a seminar in graduate school. Most of it was way over my head. But I’m glad to have had the experience and lived to tell the tale.