Highlights of a Diverse Season 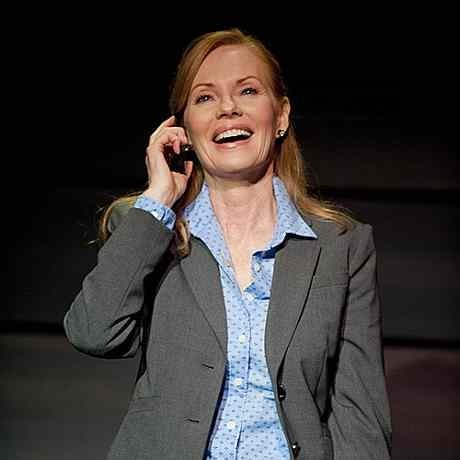 Marg Helgenberger got a jump on the season at Barrington Stage. All photos courtesy of the companies. 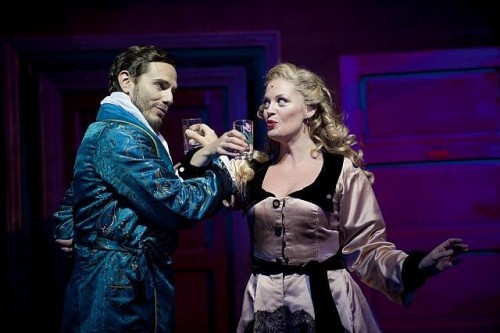 Kiss Me Kate was a smash hit for Barrington Stage. 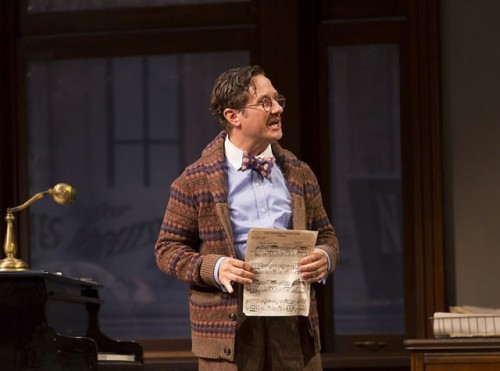 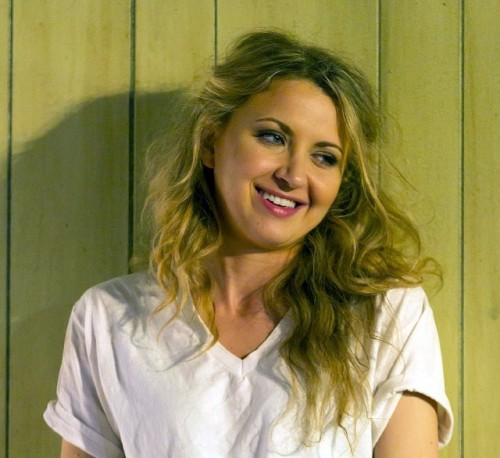 The amazing Nina Arianda was a last minute casting change for Williamstown. 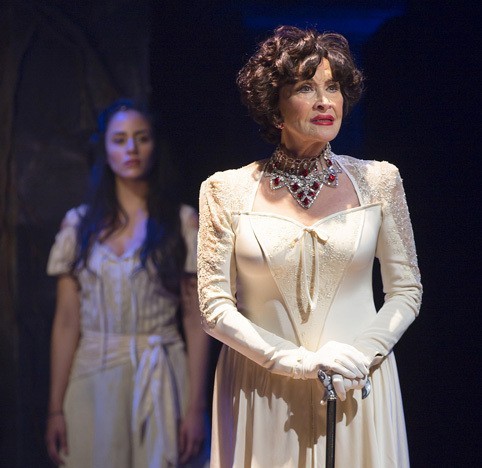 Chita Rivera made her first visit to the Berkshires in The Visit. 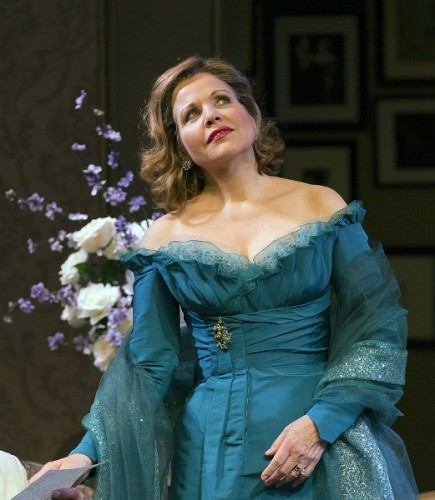 From opening night at Tanglewood Renee Fleming went straight into rehearsal at WTF. 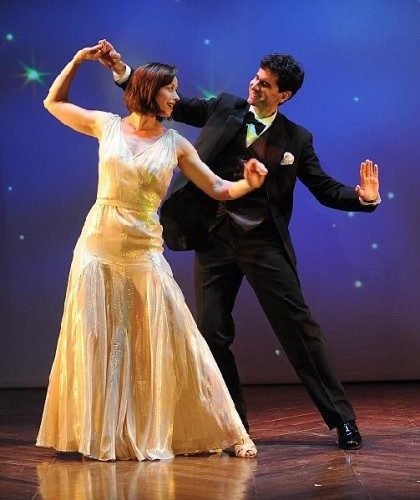 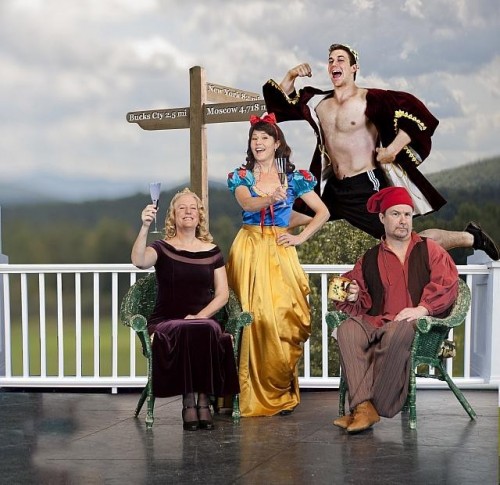 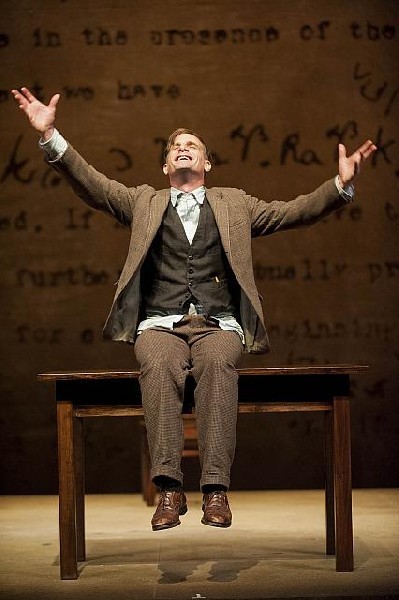 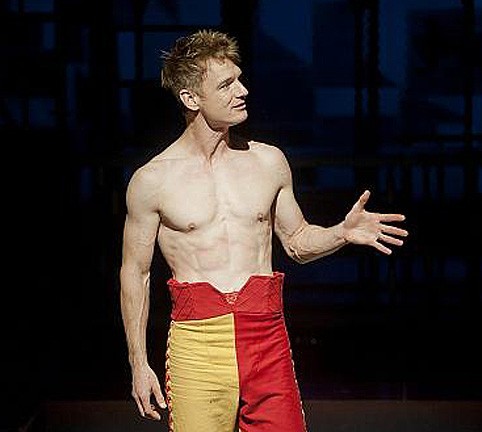 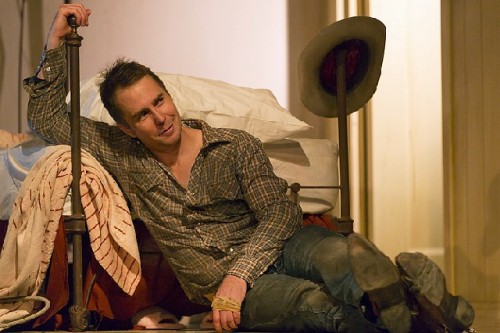 Sam Rockwell was red hot paired with Arianda as a lonesome cowboy. 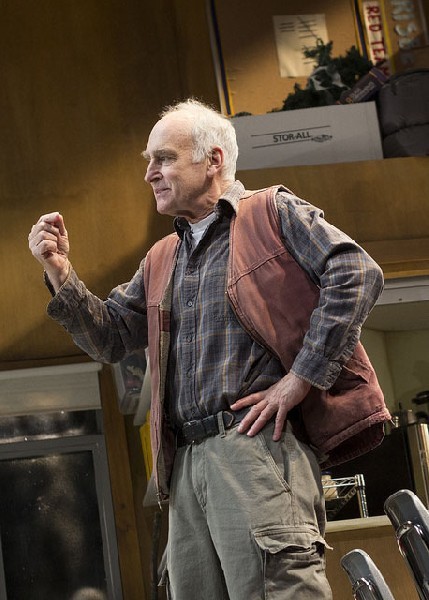 Jeffrey DeMunn was subdued but poignant as Walt in WTF’s A Great Wilderness.

On May 1 we posted an obituary for former Williamstown Theatre Festival director, Nicholas Martin. The summer season officially ended on August 31 when correspondent Susan Hall reviewed Asher Lev in Chicago.

Within those bookends 83 theatre pieces- reviews, previews- interviews- were published by Berkshire Fine Arts. In addition to myself there has been a great team of contributors; Mark Favermann in Boston, Susan Hall in New York and Chicago, Jack Lyons covering California, Ed Rubin in New York, Melissa Hall in Indianapolis, Anjelica Jansen in Germany edited by Astrid Hiemer, Maria Reveley in the Berkshires, Wendy Arons in Pittsburgh.

This report, however, will be limited to my overview of the four major theatre companies in the Berkshires: Barrington Stage Company, Berkshire Theatre Group, Shakespeare & Company and Williamstown Theatre Festival.

For a variety or reasons including travel and other interests we only managed to see the complete seasons of Barrington Stage Company and Williamstown Theatre Festival. We saw highlights of Shakespeare & Company and sampled Berkshire Theatre Group. In August a new contributor, Maria Reveley, helped to cover what we missed.

A number of Berkshire colleagues cast a wider net in their coverage. Some even manage a matinee then a drive to an evening performance. While admiring their stamina we can’t match it. We are grateful that Leanne Jewett has expanded our reach into Vermont.

Since we haven’t seen everything it is not appropriate to promote this as an annual list of “Best” and “Worst” of the season. We prefer the notion of highlights extracted from what we actually saw first hand.

There were several, Kiss Me Kate at Barrington Stage, as well as The Golem of Havana and a work in progress by Bill Finn that was not open to review. A Little Night Music at the Colonial Theatre was produced by Berkshire Theatre Group. June Moon at WTF had some music and a theme of Tin Pan Alley but it wasn’t precisely a musical. The reworked Kander and Ebb musical The Visit was featured at Williamstown Theatre Festival.

From BTG’s Sondheim musical we reported that “The performance 'Send in the Clowns' by opera star and Berkshire resident, Maureen O’Flynn, was galvanic…It is shattering when she sings 'Isn't it Rich? Isn't it queer? Losing my timing this late in my career.' As a senior doesn't that moment come for all of us? We make jokes about our inevitable demise. Humor and clowns are the last resort for tragedy and loss. How incredibly poignant.”

It was the singular moment and performance of the season for musicals.

The outstanding musical hands down was Kiss Me Kate. We gushed “Celebrating its 20th season Barrington Stage Company has gone all out with a smashing production of Cole Porter’s classic 1949 musical Kiss Me Kate.” The production values from sets and lighting to costumes were superb as was the wonderful pit band.

There was a terrific highlight from the mostly disappointing June Moon. “The fabulously gifted and hilarious Christopher Fitzgerald has a wonderful cameo as composer and lyricist Benny Fox. He is always trying to nab someone to listen to his outrageously corny tunes. One implausibly is about a long distance lover’s call to 'Tokyo.' With off the script improv and physical comedy every chance he gets Fitzgerald steals the show. We just can’t get enough of this amazing actor.”

The Visit was produced with the finesse and Broadway quality production values we expect from WTF. There was an incredible set. It will best be remembered for a game, past her prime performance by Chita Rivera, her first in the Berkshires.

There were differing responses to smooshing together Parts One and Two of Henry IV at Shakespeare & Company. Other than being overly long it was an engaging evening of theatre with singular performances.

We were thrilled and befuddled by the riveting performances of Sam Shepard’s Fool for Love. Overall it was a very special experience in a class by itself.

For a variety of reasons, including issues of architecture, I found Michael Frayn’s Benefactors at Berkshire Theatre Group absorbing.

Breaking the Code at Barrington Stage is a problematic play but it was given a game production.

Hands down Dancing Lessons by Mark St. Germain. This show seems destined to be a standard with regional theatre companies.

This is a tough and competitive field including the superb Henry Clarke in Henry IV. Sam Rockwell, a last minute replacement in Fool for Love was riveting. Jeffrey DeMunn as Walt gave a complex and nuanced performance in A Great Wilderness at WTF.

This category however, is a coin toss between Mark H. Dold as the brilliant and tormented Alan Turing in Breaking the Code and John Cariani as the fictional Ever Montgomery of St. Germain’s Dancing Lessons. These remarkable shows ran back to back on the Main Stage of Barrington Stage Company.

While all five actors were magnificent the edge goes to John Cariani. His performance was above and beyond compare.

It was an interesting season including the first non opera role by the nicest diva of her generation, Renee Fleming in the forgettable comedy Living on Love at Williamstown Theatre Festival. It was a coup for Jenny Gersten to lure her as well as Chita Rivera to the Berkshires. We would like to seem more of Fleming in this context.

At Barrington Stage The Other Place by Sharr White did not live up to expectation but we were absorbed by the finely crafted performance of Marg Helgenberger. Like Fleming she came to the under the radar Berkshires to make a career move from TV to theatre.

There were mixed reviews but we reported that “The play may not make sense but Helgenberger’s Juliana grabs us by the throat and won’t let go until the final curtain. She gives a sensational performance providing a fabulous and memorable evening of theatre.”

Kristin Wold was game in the uneven Shakespeare’s Will at Shakespeare & Company.

The absolute thrill of this season was another opportunity to see the moody and awesomely gifted Tony winner Nina Arianda in WTF’s Fool for Love. We saw her as a breakout performer Off Broadway in Venus in Fur. While a last minute casting change she sizzled in tandem with Rockwell.

Be still dear heart I wrote “Through the entire play we never take our eyes off Arianda. She has a gorgeous, tall, thin body and, as in her Tony winning Venus in Fur, it serves as a dramatic instrument and weapon.

“As a still young actress she has a mid career control of every aspect and nuance of her performance. She completely inhabits the characters and works them from the inside out. Every gesture advances the plot. Her performance goes far beyond delivering the lines. Rarely have we seen a more total physical and emotional presence on stage. Panther like she prowled the set.”

Oddly notable in this category is Jonathan Epstein who in a Henry IV adaptation cast himself as the king in a role minor to that of his son. He gave an imperious and fascinating performance.

As previously stated who will ever forget Christopher Fitzgerald as directed by his wife Jessica Stone in the unfortunate June Moon. The biggest mistake of that production was not casting him as the lead. We can never get enough of him.

Oddly, three outstanding performances by a supporting actress occurred in the same production of Vanya and Sonia and Masha and Spike by Christopher Durang at Shakespeare & Company. We just loved Tod Randlph (Sonia), Olivia Saccomanno (Nina), Angel Moore (Cassandra). Moore was totally over the top and Saccomanno played an enticing and promising ingénue.

Randolph was most memorable for a complex performance as Sonia. We wrote that “After the ball is over Sonia has a brilliantly poignant, faltering phone exchange with an admirer from the night before. He was smitten with her Maggie Smith bit. Randolph nicely navigates between being flattered and apprehensive should they date and risk his disappointment for her plain Jane self.”

It’s a tug of war between Joe Calarco for Kiss Me Kate and Julianne Boyd for Dancing Lessons. This comes down to a choice between a big lush musical and a tightly wound two hander. In both instances the directors were brilliant. A coin toss.

A special mention for John Doyle who did his best to breathe new life into the long faltering The Visit the last work of the team of John Kander with Lyrics by Fred Ebb. With rewrites by Terence McNally he almost managed to get the musical off life support. We were greatly relieved that unlike his prior WTF effort Ten Cents a Dance the actors weren’t tasked with playing instruments.

It comes down to Jenny Gersten, now departed from Williamstown Theatre Festival, and Julianne Boyd at Barrington Stage Company.

The edge goes to Boyd.

It has been posted that Gersten, after just one year, is leaving NY's High Line for a yet to be announced position in the arts.

Yes there is theatre in the Berkshires after Labor Day. We look forward to fall productions as well as getting on the road and editing our contributors.

At least for now, however, we pause and catch our breath.