My Name is Asher Lev at Timeline

Chaim Potok's Portrait of an Artist in Chicago 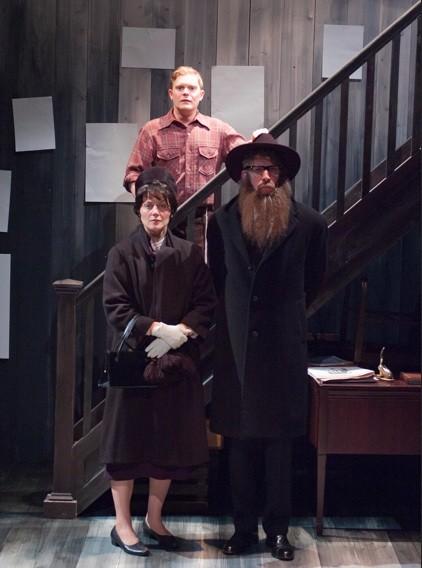 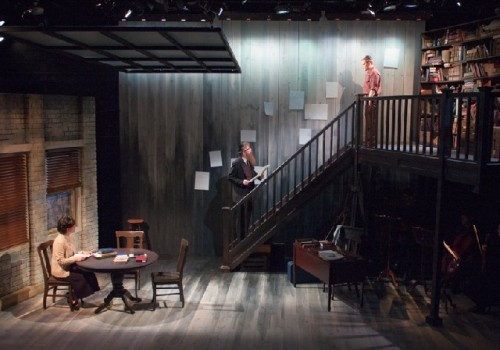 The father admires his son's work and finds that he has talent, which complicates matters. 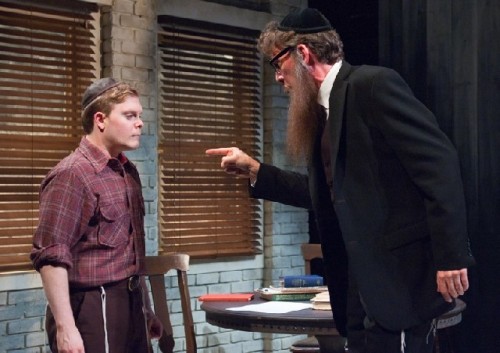 The father trying to take control. 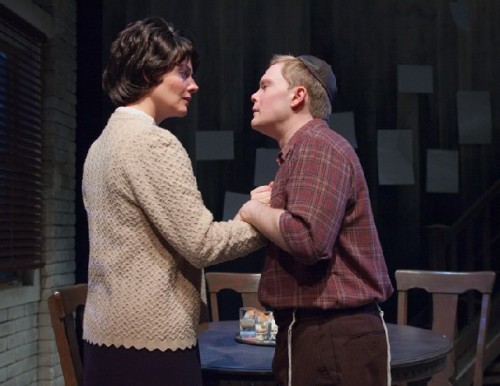 Danica Monroe as the mother understands, but is torn between father and son. 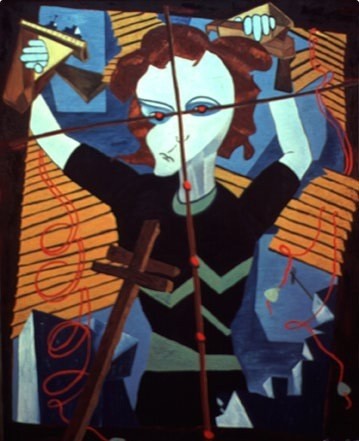 This is a painting by Chaim Potok, the author of the novel on which the play is based.

Playwright Aaron Posner worked with Chaim Potok, the author of The Chosen, on a stage adaptation of that book. He started to work with Potok on My Name is Asher Lev and when Potok died, continued collaborating with his wife.  Posner very much captures Potok’s spirit in his shaping of the material.

Brian Sidney Bembridge has constructed a set that evokes a home, an artist’s studio and leaves a space between the loft and the living room that houses a three-piece band that plays music composed by Andrew Hansen to evoke klezmer and briefly jazz to reflect the setting.

My Name is Asher Lev is the story of a boy brought up in an insular world with very particular beliefs and practices. Until recently this world has succeeded in keeping its own in the fold. Very few escape or leave behind the families, religious observances and commitment of the Hasidic world. Lubavitcher ambulances rush all over the boroughs of New York today. Live chickens arrive to be properly slaughtered in Crown Heights, Brooklyn.   Young couples are married as soon as parents can make an arrangement. They don’t have a chance to think about leaving when they are surrounded by a gaggle of young children. You still see teenage mothers aged by their wigs and their nun-like dress and tied down by several kids hanging from their hems.

Asher Lev is an only child, which is unusual. Perhaps his parents knew they had an apostate on their hands when he was born, and they did not want to breed another. Asher Lev has a gift, which he explains toward the end of the play is both divine and diabolic.

Alex Weisman, the young actor who takes on the play’s title role, indicates from the start that he is in knots over his conflicting wishes to please his parents and his need to draw.  Drinking the fresh orange juice his father prepares for him every morning is not enough for the Rebbe’s God, even though Asher Lev downs it quickly before the vitamins evaporate. We viscerally feel his deep need to draw as Asher keeps trying to wrap his empty hands around a crayon or a brush.

The play is told from Asher’s point of view, and director Kimberly Senior has effectively carved out the other characters even though they are flattened against Asher’s struggle.

Lawrence Grimm has the richest role on stage, because he is both the father who loves his son and wants to control him, or control the uncontrollable, and also the all-knowing Rebbe. He is the artist who liberates Asher, Jacob Kahn. Grimm is very good indeed as he depicts these three different characters.

Asher’s mother is portrayed by Danica Monroe, who also plays a prominent gallery owner and a nude model. The mother is by far the most important role in this group. The other two are constructed as stand ins for character types. As the mother, bemoaning the loss of a beloved brother, trying to please her husband who clearly has the weight of the world of his shoulders and be a mother to a complicated son, she captures the pulls and strains of accommodation.

The central thread of the play is the desire of the parents to let their son flourish but at the same time to keep him within their parameters.

The title of the play is trying to tell us something. What is after all in a name? We can change our names. But after we have come to identify with them, it is hard to separate.

Edward Hoagland, a masterful novelist and essayist, went to his father, a stuffy international lawyer, to tell him that he had won a prize and Houghton Mifflin would publish his first novel.   His father said, ‘I hope you are not using my name.”  Which was Teddy’s name too, ‘Hoagland.”

Does Asher Lev have a choice here? It never comes up.

It is the Rebbe in the end who kicks Asher Lev out of his home and his community.  Asher's first masterpieces are crucifixions portraying his mother in the window of the living room. Set designer Bembridge makes the brick design around the living room window a subtle cross. Jews are not allowed to draw crosses. (New Yorkers learned from Catholic mayor Rudy Giuliani that you can’t make art from turds either).

Asher Lev will not back away from his work, and so he leaves. As many people who are forced from a seeming paradise learn, being banned is not so bad. In fact, you can flourish.