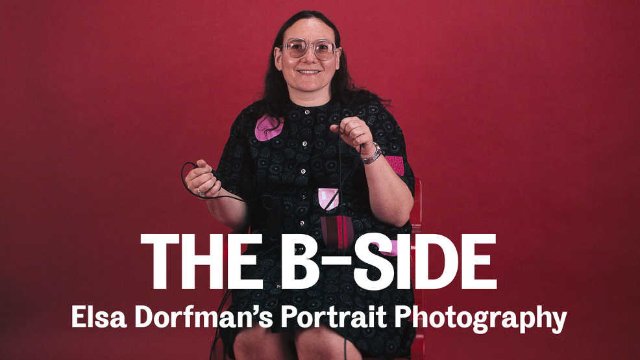 The Dorfman documentary is now on Netflix. 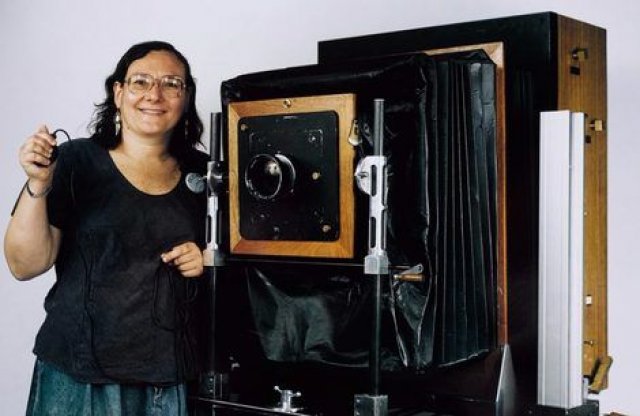 Elsa had a lifetime lease on a large format Polaroid camera.

At home on Flagg Street with her $300 couch. 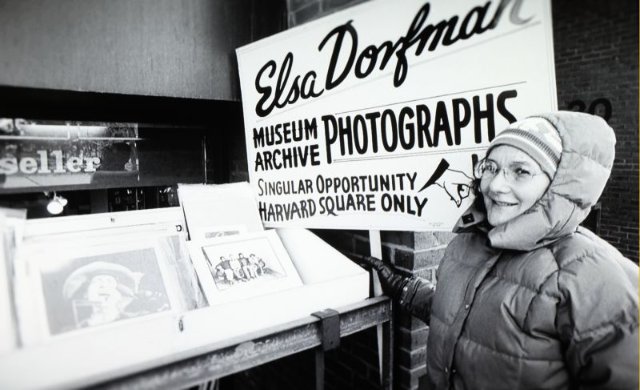 Selling prints from a shopping cart in Harvard Square. 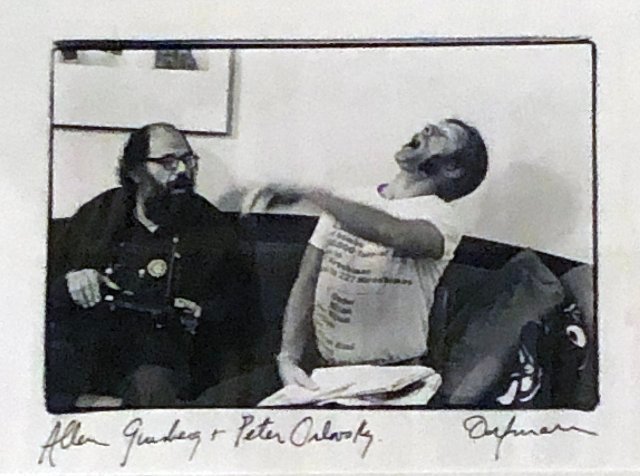 I bought this print for just two bucks. 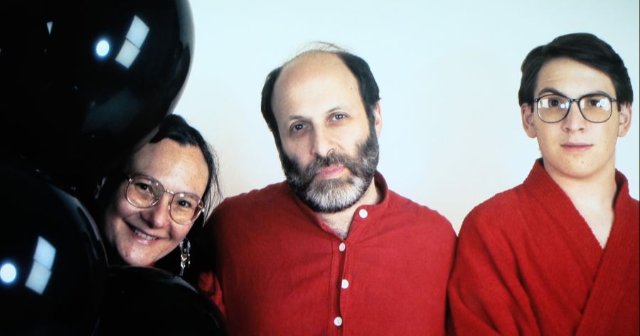 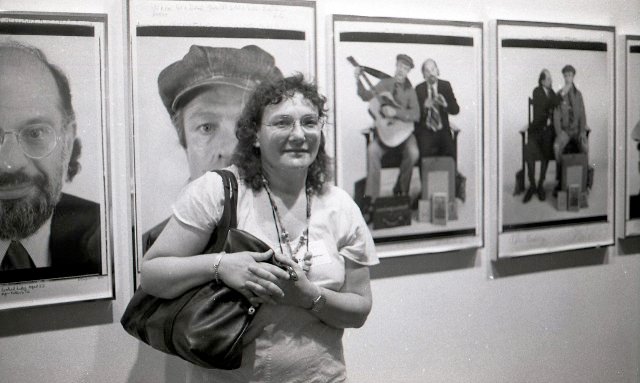 Elsa at an exhibition of her work. Giuliano photo. 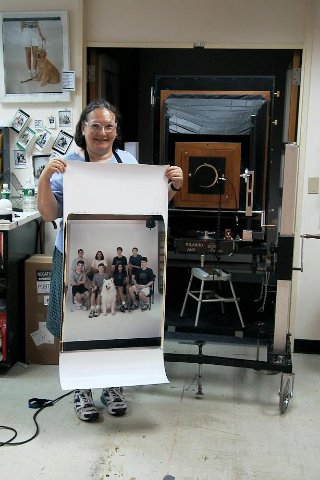 Elsa holding up a print. 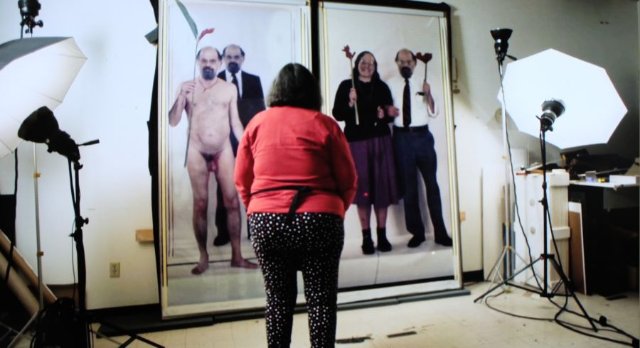 In the studio with her notorious Ginsberg prints. 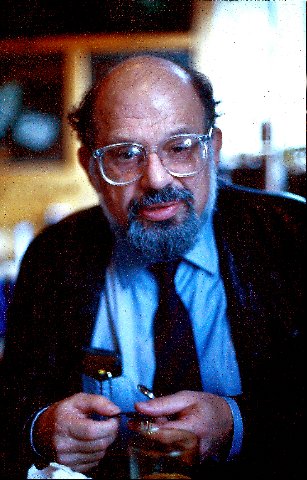 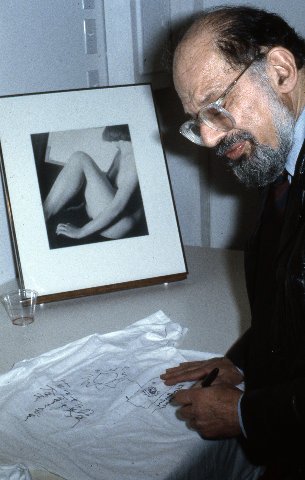 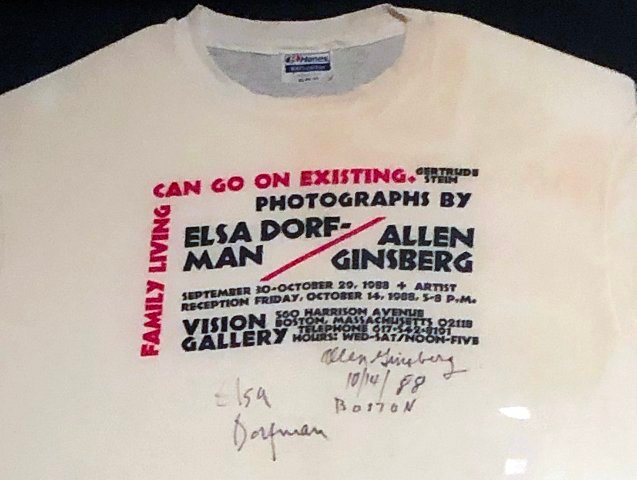 I framed the t-shirt they signed.

The B-Side: Else Dorfman’s Portrait Photography
By Errol Morris
2016, 1:16 minutes
Available on Netflix

Most likely, I met Elsa Dorfman (April 26, 1937 – May 30, 2020) in Harvard Square in the 1980s when she was selling black and white prints out of a shopping cart. They were ridiculously cheap at $2.00 each. She says that she borrowed and returned the cart after each season and didn't "pilfer it."

At first the cops told her to beat it. But her lawer husband gave her a letter stating her constitutional rights to free expression. After that, she was a familiar, folky presence in the Square.

I bought a couple of prints, and as is always the case, regret that I didn’t buy more. I treasure my image of Allen Ginsberg and Peter Orlovsky at home on their couch. She wasn’t very meticulous, certainly not at that price. I took the liberty of spotting the dust glitches.

Allen was a close friend of Elsa and her husband, renowned attorney Harvey Silvergate. Ginsberg was one of her most frequent and famous subjects. Whenever in the area he stopped into the studio for a session with her large format, 20 x 24” camera uniquely set up to handle instant Polaroid film.

Primarily, Polaroid was marketed as an instantly gratifying, amateur novelty. It was enticing to have an immediate result and not having to wait for  film to be processed.

Dr. Edwin H. Land (1909-1991) founded Polaroid in 1937. The company occupied a landmark modernist building on Memorial Drive in Cambridge. Land collected photography and was a visionary as well as inventor. In a clip in the documentary by Errol Morris, we hear Land predicting that one day both camera and phone would be a part of our everyday life.

The irony is that digital photography rendered Land’s process obsolete. The company was sold for its brand name and all of the film and archival materials were scrapped. Elsa managed to secure enough film to keep going but eventually retired.

Simply put, Harvey and Elsa were A List, Cambridge-liberal royalty. Despite that celebrity status Elsa was frumpy to a fault. When I met her she was already matronly. In the film she often refers to herself as a nice Jewish girl. More and more, she evolved to fit the paradigm of a Jewish mother. She shows us images of her parents and mimics her Mom's hectoring tone. Elsa spoke with a grating, flat, ethnic accent punctuated by unflappable mirth. Her glass was always half full and she was tons of fun to be with.

It’s rather remarkable, but galvanically credible in this intriguing film, how a clunky, schleppy Cambridge housewife came to be one of the singular Boston artists of her generation. Boston spawned many great photographers and Elsa is now regarded as among its best.

But as an ersatz Rodney Dangerfield, she spews a constant litany of getting no respect. Even from Polaroid, although she evolved as one of the most renowned practitioners of the medium. She states, however, that she had many friends at the family-like Cambridge company.

There were only five, large-format cameras and she got one "by being a nag." She ended up renting it for the duration of her career. She attended one of the early demonstrations but was not on the short list of a half dozen who were invited to explore the medium.

Pointing to the richness of detail and color of a print she comments "There will never again be film of this quality."

Polaroid maintained the Light Gallery in Cambridge which focused on artistic applications of the medium from Ansel Adams to Douglas Huebler, Marie Cosindas, Gyorgy Kepes and Andy Warhol among others.

Initially, the large format camera was set up in a studio at the Museum School. Artists could rent it for projects. Elsa used it so often that, with the help of Silvergate, she wore down Polaroid into what proved to be a lifetime lease.

Unlike the celebrity photographers she got little encouragement and no freebies from Polaroid. “Not even an SX-70 camera” she tells us. It was the company’s most popular format from 1972-1981. As a promotion, they gave cameras to established photographers.  It’s what Warhol carried around with him and used at Studio 54. Tons of those images are archived at the Warhol museum.

In a spacious Mass Ave. studio, within walking distance of her home, Elsa established a portrait studio. Her famous friends were shot for free. The general public was charged several hundred dollars for a session. As she explained her expenses included rent, camera fees, studio equipment and costly film. She took two images allowing clients to select one. The “reject” what she dubs “The B Side” went into numerous flat files. They are organized by year and months. Dorfman was amazingly prolific.

While she concentrated on portraits she wanted subjects to relax and be themselves. Subjects were encouraged to come with props. Most sitters were stangers with whom she made little effort to penetrate their character. She ran a commerical portrait studio not that different from Bachrach's on Boylston Street. Little of the resultant work may be regarded as art. The images, no doubt, are treasured as family heirlooms by those who posed for them. The same may be said for the money-making, enervating society portraits that Warhol made during a fallow, transitional period. As Sargent quipped "A portrait is a painting in which there is something wrong with the nose." Artists who earned their keep in that manner referred to it as "The burden of portraiture."

Much of the film entails her going through flat files and showing us endless rejects as well as boxes of early black and white images. When asked what will become of this vast archive she responds with not having a clue. There are Dorfman works in local museums including the MFA and a stash at the Danforth Museum that Linda Poras and I used for a Beat Generation, multi-venue exhibition.

“I was always on the very bottom of the list” she tells us in a homey, self-deprecating manner. "No gallery was ever interested in my work." She speculates that from her estate the more interesting images will be sold, but there will still be tons of those “B-Sides.”

Early on, she lived in New York and worked for the beatnik Grove Press as a secretary. She met and became friends with the renowned poets and authors who passed through the office. On a fluke, back in Cambridge having earned a degree as a teacher, she was given a Hasselblad and access to a darkroom. She also worked extensively with 35 mm format.

Early on, it resulted in Elsa’s House Book: A Woman’s Photojournal. She shows us vintage prints from that publication as well as images of her celebrated friends. In many ways the early work is her most interesting.

There is a sameness to her addictive Polaroid portraits. Basically, it’s just one setup.  When viewed in bulk the portraits are mostly enervating. Back in the day, we saw a lot of them in shops and store windows in Harvard Square. Exposure to light often faded the prints.

What came to matter in the work entailed who was in front of the camera. There are stunning and remarkable images of Ginsberg and special friends. She pulled out an iconic image of “Jonathan when visiting from Maine.” It proved to be Jonathan Richman the lead singer of the legendary Modern Lovers.

I had lunch with Allen Ginsberg in Harvard Square. He was in town for a show at Brent Sikkema’s Vision Gallery in a project with Elsa. I bought an elaborately inscribed Ginsberg print but should have bought two. Discussing that later with the gallerist he said “You should always buy two. One to keep and one to sell.”

Together Allen and I walked up Mass Ave to Elsa’s studio. I hung around to watch them at work.

On another occasion, Elsa had access to the jumbo, one of a kind, Polaroid camera. It resulted in nearly life-size images. It was set up at the Museum of Fine Arts to copy masterpieces in the collection.

The large format Ginsberg prints were pulled out of storage while Elsa related how they were created. The first shot is of the poet wearing a suit “The one he was buried in.” We hear their last conversation on her answering machine. It’s a gut wrenching moment. Then another message that he is passing away surrounded by friends.

The first “suited image” was tacked up on the studio wall. Then Allen took his clothes off and posed nude for a double portrait, arguably, Elsa’s masterpiece.

The voice off camera asked if she had told him to pose nude. Oh good heavens no is the response “I’m a nice Jewish girl. I would never ask someone to take their clothes off.” She relates visiting his NY apartment and Ginsberg answering the door nude. Of course she was absolutely shocked and speechless.

That nude/clothed, double Ginsberg portrait was offered to the Museum of Fine Arts. The museum owns other works and Elsa was friends with curator Cliff Ackley.

Then MFA director, Alan Shestack, rejected the potential gift. As he told me for an Art News piece, he couldn’t acquire an image that the museum would not display.

Elsa told me that she would give the portrait to her son Isaac. Truth is, it belongs in a museum which should have been the MFA. It’s just another anecdote about why the MFA really sucks in the field of modern and contemporary art. Shestack just didn’t have the balls to acquire a masterpiece.