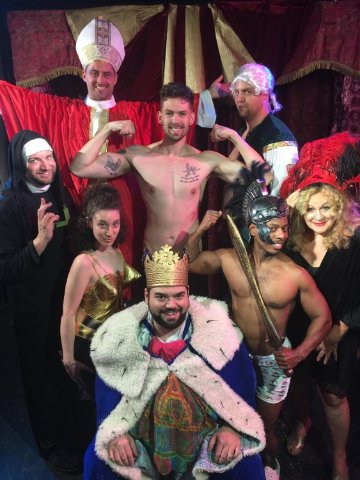 Photo courtesy of Ronnie Larsen Presents. The cast of The Gay Naked Play clowns around.

OK, so no such troupe actually exists. But it seems as real as any other live company in southern Florida, thanks to The Gay Naked Play.

The southeast regional premiere of this comically fearless and, many might say, sacrilegious and risqué play is running through Sept. 2. The venue is The Foundry at The Abyss Theatre, a Ronnie Larsen Presents production.

By the way, Larsen is an actor, director, producer and playwright whose work audiences have seen throughout the U.S. and other parts of the world. He’s increasingly showcasing his work in southern Florida, particularly at the Foundry in the Ft. Lauderdale suburb of Wilton Manors. It is home to a large LGBQT community.

The Gay Naked Play, a backstage comedy and a play-within-a-play, is one of several shows Larsen is presenting this season. Larsen is also directing this play with a high energy comic verve.

While the play features gay stereotypes, male nudity, highly suggestive scenes and vulgar language, this much is clear: late playwright David Bell wrote with tongue-in-cheek humor. Indeed, it’s clear his mission wasn’t to hurt anyone’s feelings. And the same is true with Larsen, who has given the play a distinct South Florida flavor.

For instance, Larsen mentions Pompano Beach, where the serious-minded The Integrity Players makes it home and isn’t doing well.

“We’ve got 10 people a night and meanwhile, Slow Burn is packing them in at the Broward Center,” laments Harold, artistic director of the 11-year-old company.

“Maybe we should do a musical,’ suggests stage manager Tim.

Clearly, The Gay Naked Play is escapist fare and theater lovers should exult.

After all, humorous references abound to well-known shows and its songs, making this work not just a gentle satire, but a kind of valentine to the theater. At the same time, the play raises relevant issues and questions such as what is art and about taking risks. And how is live theater supposed to survive when securing backers and selling tickets are difficult?

Frequently, star-less productions of serious plays on Broadway struggle. So, what’s a tiny theater company supposed to do -- especially when it’s committed to producing meaty, meaningful and, perhaps most of all, daring theater?

For the successful directing team of Eddie and Edonis, it’s a potent, three-part punch when it comes to showbiz success. Still, what talks loudest in this industry?

Why, money of course.

“It’s a nightmare!,” the gay, colorful Eddie bemoans with mock despair and exaggeration. “We’ve got four shows running in South Florida right now and they’re all sold-out for 9 months and I’ve got 10 more ideas for new shows and nowhere to put them. The fact remains that if we do not find another theater and quick then we will go from being very rich to just plain rich.”

Well, perhaps. But they’re also about to make The Integrity Players a lot happier. The pair storms the company’s “emergency” board meeting and offers inspiration.

Eventually, it leads to a silly, nude production based on the 2004 movie The Passion of the Christ. And who else to play Mary than the already pregnant Amanda? So then, might better times await Amanda and Co.?

If you will, take a dash of Noises Off, sprinkle in a bit of Naked Boys Singing and top it off with a smidgen of The Producers and The Book of Mormon. This might give you an idea of what you can expect with The Gay Naked Play.

To be sure, this play lacks the irresistible farcical material and situations of Noises Off. Still, Bell’s play possesses plenty of humor and colorful characters.

For example, there’s Amanda’s mother, an adamant, domineering woman. Specifically, a character breakdown in Bell’s script describes her merely as “The Money.” That’s because she’s the sole backer.

Thankfully, Larsen and Co. have found a quality actor in Ginger Reiter to play Mrs. Anderson. Reiter narrows her eyes to form a forbidding look which seems to say “Just try me!”

Reiter endows Mrs. Anderson with a hint of glamor, a commanding, Mama Rose-like presence and a sharp, sarcastic voice.

One of the transitional songs is, appropriately, “We Like to Party” by the Vengaboys. It seems “Happiness is just around the corner” for this troupe. That is, thanks to Eddie and Edonis (an equally exuberant Stephen Warneke).

Then, there is the chosen star of The Passion of the Christ parody. He is one Kit Swagger.

Austin Minard, sporting tattoos, conveys the aura of a free spirit. In addition, he can be rude and menacing. However, the character could be more outrageous, shameless and cocky. While one might say he has a quiet, well, swagger, it would be riveting to see Minard match Reiter’s intensity.

This cast also includes Emily Freeman as a dreamy, cheerful and hopeful Amanda. Playing beside her is Josh Nelson as Harold, who conveys authentic ambition, emotion and is convincingly torn during one scene. However, he comes up short in one instance. Specifically, when Harold announces the start of the “emergency” board meeting, Nelson’s tone of voice is too laid back.

On a more positive note, Josh Vasquez is a convincing bundle of nerves as the fictional stage manager, Tim.

Questionably, the play starts with Beethoven’s 5th, which might suggest that intrigue, mystery or murder will follow. However, this play features no such action.

No, there’s none of that, nor are there slamming doors or utterly uncontrollable chaos.

Still, The Gay Naked Play, while it might offend and shock some, amounts to a fun evening of theater.

That is, if this brand of humor doesn’t turn you off.

The Gay Naked Play continues through Sept. 2 at The Foundry at the Abyss Theatre, 2308 N. Dixie Highway in Wilton Manors. Tickets range from $35-$50. For more information about this, or other Ronnie Larsen productions, visit www.RonnieLarsen.com.