Waiting for Godot at Barrington Stage 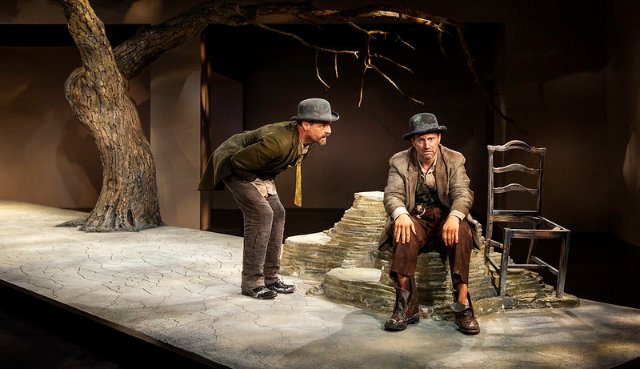 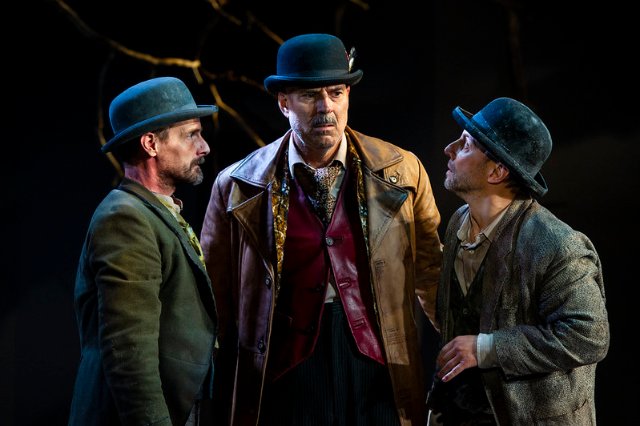 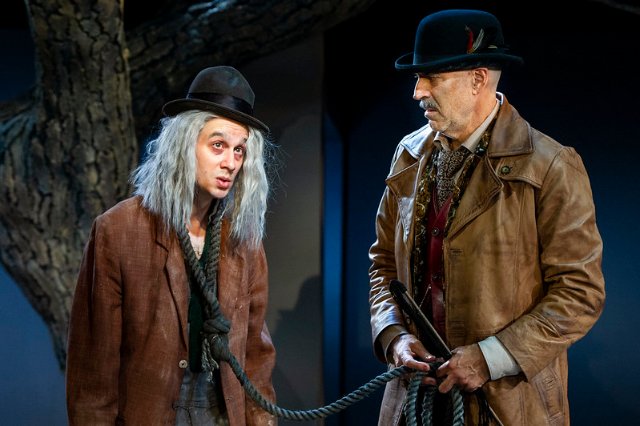 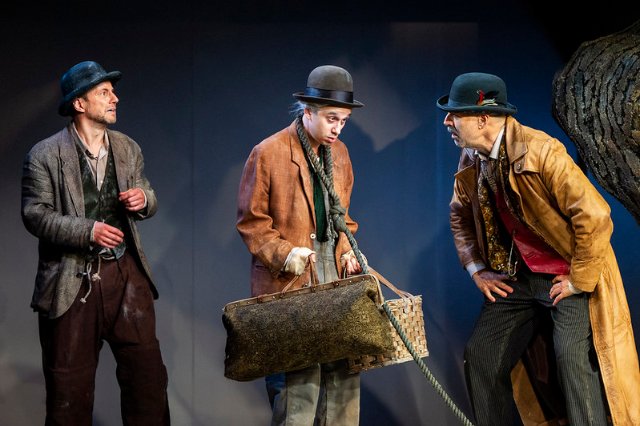 Nothing to be done.

Waiting for Godot is Samuel Beckett's translation of his own original French-language play, En attendant Godot, and is subtitled (in English only) "a tragicomedy in two acts." The original French text was composed between 9 October 1948 and 29 January 1949. The premiere, was on 5 January 1953 at the Théâtre de Babylone, Paris. The English-language version premiered in London in 1955.

The Irish born Beckett (1906-1989) was 42 when he wrote his first play which is considered as an enduring icon of the avant-garde. It is regarded as reflecting post apocalyptic Europe in recovery from WWII. The bleak, desolate landscape, accented by a single forlorn tree is a metaphor for the ravaged aftermath of war.

In tone and gravitas it may be compared to T. S. Eliot’s The Waste Land (1922) which encapsulates the aftermath of WWI.

The complex, demanding, and ravishing play continues to be produced as each generation finds new relevance in the work. So many great actors have taken on the roles in legendary productions.

However, plus ça change, plus c'est la même chose. The Beckett estate is rigid in insisting that the play must be presented exactly as he intended.

Having seen the play many times in different productions over the years its tropes are deeply engrained. One anticipates, for example, how the daunting Lucky monologue will be managed. Or, the complex stunt involving three rapidly rotating hats for two heads.

It’s an interesting experience of theatre to anticipate all the moves. Then, in a flash, to compare and contrast with the mental rolodex of all the other performances you have seen. It’s the platonic trope of how the chair one is contemplating relates to the paradigm of a chair. In essence, its chairness.

In that regard, the Barrington Stage production is both consistent as well as off kilter in the demanding conflations of memory.

When performing the ever challenging Beckett the devil is in the details.

Let’s start with the tree. For me it was far too robust and wrong. In the design by Luciana Stecconi it seems more like a diseased Dutch Elm than the fragile wreck which is more what I have in mind. It is entirely too sturdy and would indeed support the weight of the two vagrants who discuss potential suicide hanging from it.

If only they can find some rope.

The essence of Godot is the incremental passage of time. Mark H. Dold (Vladimir), and Kevin Isola (Estragon) have a slippery grasp on the quotidian. They are confused about the day before and have anxiety about tomorrow.

What defines the moment is that they are waiting for a Mr. Godot. (Pronounced in this production as God-oh.) As Beckett states "a tragicomedy in two acts" comes from the vagrants as skilled vaudevillians.

Dold and Isola are game for that. We have seen the remarkable Dold in many roles but this may be the most demanding that he has taken on. His interpretation is lavishly detailed with sharply accented movements and moments.

He is the dominant member of the duo constantly providing support, empathy and even sustenance to the more dependent and ramshackle “GoGo.”

When GoGo is hungry DiDi will produce a carrot, turnip, or radish from the pocket of his ragtag costume (neatly designed by Debra Kim Sivigny). The carrot is skinny and a metaphor for meager nourishment. But even scrawny carrots are all too rare.

Of the two tramps Isola excels at physical comedy. His convoluted movements are intriguing if not hilarious. GoGo suffers with ill-fitting boots. Struggling to pull them off , or put them back on, chews a lot of scenery.

Passage of time, staying amused while waiting, is a given but in this production verges on interminable. For a play about filling time, at two and a half hours with intermission, it seems there is far too much of it.

Making the most of a relatively small stage director Joe Calarco has set the action on a diagonal. That allows for the characters running its length and creating a somewhat frenetic sensibility.

This is particularly effective in the entrance of  Christopher Innvar (Pozzo),  and Max Wolkowitz (Lucky). By then we have been subsumed by the shtick of the two vagrants. Then Beckett introduces two of the great odd characters of the canon.

They come charging on stage with Lucky being brutally ordered on by the sadistic, mysterious Pozzo. There is a long rope around the neck of Lucky while Pozzo wields a whip.

Lucky carries a stool, suitcase and picnic basket. Shouting “Pig” Pozzo demands actions and objects. From the basket he dines on chicken. GoGo begs for the bones but it is Lucky who must decide.

They and we wonder why Lucky is never able to put down the bag and basket. It’s a major conundrum of the play and we puzzle as to what Beckett meant.

We assume that Pozzo is a ruthless oppressor but an odd empathy exists between him and Lucky. There is a symbiotic co-dependency as there is no indication that Lucky resents his brutal treatment.

Where he should be mean, inhuman and menacing Innvar mostly conveys that by barking commands. We craved more nuance in the sinister character.

Then there is the famous Lucky speech. Taunted by the tramps Pozzo demands that first he dance. There are some spastic moves and then “Think pig.” The demanding and complex rant that ensues is one of the marvels of 20th century theatre. Kudos to any actor willing to take it on. Walkowitz dispatched it with aplomb.

After waiting, waiting, and waiting through the first act at its end the boy (the 12-year-old Maximus Holey) emerges with a message from Mr. Godot who cannot come today but will tomorrow.

With the second act the vagrants discuss how they had gotten through the night. GoGo has no recall of the prior day’s events and is looking for his boots. There is more pitter patter until Pozzo and Lucky reappear.

Now Pozzo the brutal tormentor is blind, collapsing to the ground. He demands help but GoGo wants to know what he will get out of it. Pozzo offers money. Not enough. Pozzo doubles down.

Didi tries to pull up Pozzo but also collapses. It all ends in a tangle with bodies strewn on top of each other writhing in torment. Getting untangled is the thrust of the second act.

The boy returns with the same message as the day before.

By then Pozzo and Lucky have staggered off and the two tramps again are backed by a rising moon.

They look out benignly at us.

As Scarlett O’Hara says at the end of Gone with the Wind “Tomorrow is another day.”