At the Golden Gate Theatre, 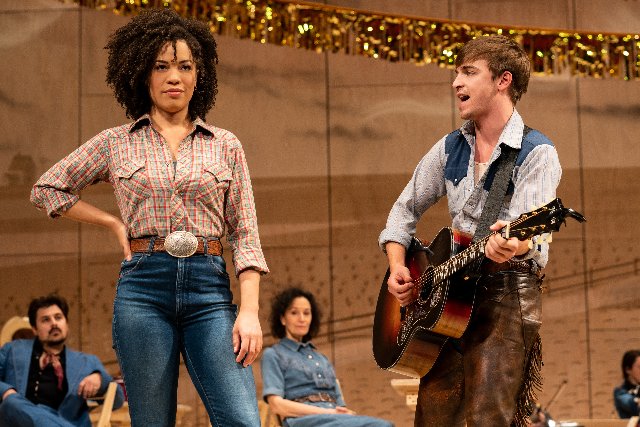 To theater goers who grew up in recent decades, it might be easy to look at the musical “Oklahoma” as a saccharine relic of the past.  Although it opened in 1943, this first collaboration of Rogers and Hammerstein heralded the post-WWII Broadway musical era of American confidence and optimism.  More importantly, it represented a breakthrough in the form.  Rather than a showcase for unrelated songs, all of the artistic elements – music, lyrics, book, and dance – integrate in driving the plot forward.  Of course, it doesn’t hurt that “Oklahoma” is full of memorable songs and characters.

“Oklahoma”’s debut also occurred during a period of social repression.  The Motion Picture Production Code that existed from 1930 to 1968 acted as moral police to ensure that films supported its sense of propriety and patriotism.  While its scope did not extend to the stage, producers of expensive musicals didn’t want to risk attracting MPPC’s attention.  That changed, most notably with 1967’s “Hair,” which brimmed with promotion of anti-war ideas, flag denigration, and nudity.

In recent years, producers have looked to reimagine many of those musicals from the sweet and light era and reveal their dark underbellies.  Musicals that already had a shadowy side like “Carousel,” “Camelot,” and “Oklahoma” were prime prospects.  Broadway saw this musical revitalized in an edgy form in 2019.  That production, directed by Daniel Fish, won a Tony for “Best Revival of a Musical” and is currently touring.

For those who have seen the musical in its original form, this vision may seem provocative and interesting with considerable pluses and minuses in contrast with past viewings.  Those who are new to the play will likely enjoy it without having a really good sense of its intended complexion.  It would be interesting to see how the first timers would react to seeing a traditional production, which they might find hoaky, particularly after this one.

The visual elements of this new work strike the viewer before hearing a word or a note.  The cast is highly diverse, a welcomed and radical change from the white bread look of early productions, which was accurate for 1906 rural Oklahoma Territory.  The staging is not the elaborate sort common with big musicals in big theaters.  A number of light-colored, wood trestle tables and folding chairs that look straight from a raw furniture store dot the stage.  The principals and the several-piece country-swing type band are all on stage virtually the whole time, just observing the action when not performing (there is only one dedicated dancer and no chorus).  It often gives the impression of a stand-and-deliver rehearsal in a barn rather than a polished production.

Richard Rodgers’s music introduced country elements, but the score remained fundamentally show-tune in nature.  In this production, the country twang is much more pronounced, and it is often blended with rhythm-and-blues stylings, particularly the songs sung by the two female leads.  Tempos are altered, with the protagonist guitar-wielding Curly’s opening “Oh, what a beautiful morning” delivered at dirge speed by talented Sean Grandillo.

From the outset, we expect that Curly and Laurey will ultimately get together, but it is a rough road.  Their bickering early on, which could be done in a charming manner, consists largely of smarmy ripostes.  Despite their friction, they provide a fine duet of one of the signature songs, “People will say we’re in love.”  Sasha Hutchings as the female lead takes a nice turn with a little dance solo in that number and demonstrates her fine unaccompanied voice later in the acapella “Out of my dreams.”

The fly in the ointment is Jud, the hired hand on Laurey’s Aunt Eller’s farm.  A dangerous loner, he becomes obsessed with Laurey and is determined, as is Curly, to sacrifice all to win the bidding for her basket at the fund-raising picnic.  A clash between the two men is inevitable.

The secondary plotline concerns another love triangle, with Ado Annie and prospective suitors cowboy Will and itinerant peddler Ali.  Sis plays the rambunctious Ado Annie, and more than any other performer, she lights up the audience.  “I cain’t say no” is always a fun and popular number, and with her deep alto voice and her bluesy rendition, she had the audience clapping rhythm.

The production is noted for other departures from the past.  In keeping with the edginess of the new look, Act 2 opens like an acid rock concert.  With a thick manufactured fog covering the stage, an instrumental medley blasts with deafening, dissonant distortion leading into the famous dream sequence dance.  And while Agnes de Mille’s original choreography featured a graceful ballerina with a long cloth train blowing in the wind against a featureless backdrop, athletic dancer Jordan Wynn offers a high-energy modern take on the scene with mock horseback riding and gymnastics.  Another unusual feature of the production is several occasions of extended stage darkness, as well as an effective low-light, silhouetted scene.

Although the climactic scene is brief, and like the rest of the play, changes nary a word of book or lyrics, the controversy it creates surprises.  Without divulging the difference in the action of the old and new versions, suffice it to say that a sad ending goes from regrettable but understandable to morally challenged.  Very confusing.

Traditionalists may find this depiction of “Oklahoma” beyond a reasonable scope of interpretation, and they may object to the style and simplicity of the staging.  The curious and intrepid will appreciate its creativity and some of its highlights and anomalies, despite some unevenness in staging and casting.

“Oklahoma” with music by Richard Rodgers; book and lyrics by Oscar Hammerstein II; and based on the play “Green Grow the Lilacs” by Lynn Riggs is presented by Broadway SF and plays at the Golden Gate Theatre, 1 Taylor Street, San Francisco, CA through September 11, 2022.