Two Gentlemen Of Verona at S&Co.

A Complicated Tale Of First love 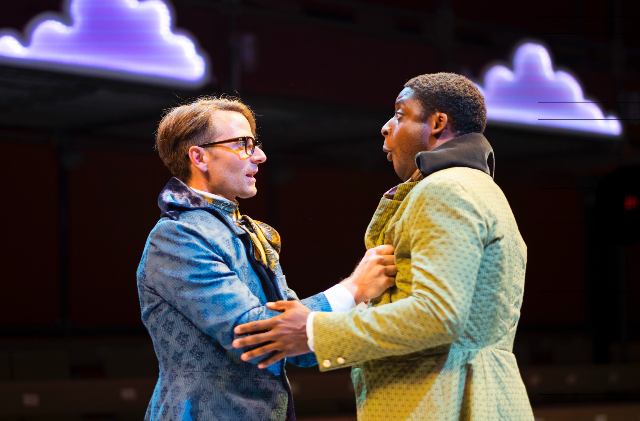 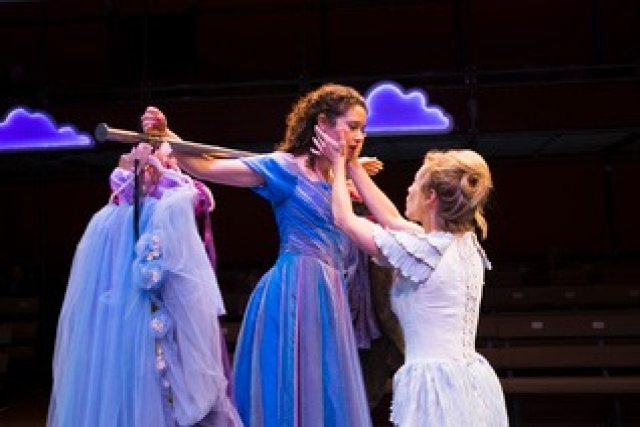 The Two Gentlemen of Verona is an early work of Shakespeare’s and is rarely produced.

This romantic comedy presents the fickle nature of first love,  its obsessions and focus.  With its four main characters, two love triangles, two fathers hoping to help their children, two of Shakespeare’s clowns, and a dog (!), this play provides laughs for the whole family.

Under Co-Artistic Director Jonathan Croy’s direction, The Two Gentlemen of Verona (a little under three hours, including intermission) exudes a  youthful energy of passion, hope, desire and folly that is palpable.

While this is a lesser work of Shakespeare’s, written when he was about 30, Croy has chosen actors that make the play fun.  Proteus falls in love with Sylvia, who is in love with Valentine. All the while, Proteus is betraying sweet and loyal Julia.

By casting Thomas Brazzle, who gives an outstanding performance, it is impossible to hate him.  He is so enamored, he cannot help himself.  With contrast, Ryan Winkles as Valentine, is a gentle soul, simple and easy to laugh at.

The women strike different chords as well.  Kate Abbruzzese, as naïve Julia, is so loyal to Poteus that she dresses as a boy to follow her love from Verona to Milan.  Cloteal L. Horne as Sylvia, however, is strong, sensual and not a fool.  She is not easily distracted by Proteus.

The play does have  problems.  Turns of plot are complicated, and its structure is awkward.  Shakespeare would develop more in later years.

At the beginning of the play, the two gentlemen are close friends. Valentine is going to Milan ” to see the wonders of the world abroad.”  Proteus decides to join him, even though bound by his love for Julia.  In Milan, Valentine falls in love with the sensual Sylvia, who returns his love,

As the action moves forward, Proteus arrives in Milan and falls in love with Sylvia the moment they meet. He becomes a different person, treacherous and plotting to win Syliva over.  Julia and Valentine are betrayed.

Croy has stated that  he wanted to create an absurdist atmosphere that allows a lot of crazy actions to take place. They do indeed seem absurd at times. The play opens with the cast dancing.  There is a big musical production in the middle of the play. Audience interaction is part of the action.  And the gentle dog, coming on and off the stage, gets the biggest audience reaction.

This leads to a less than smooth transition from one scene to the next.  The audience is surprised over and over. When Proteus changes from a loyal, loving friend, to a violent betrayer over Sylvia, the absurdity created by Croy supports this change.

The scenes with Julia disguised as a boy witnessing her love Proteus wooing Sylvia is painful to watch.  Julia is humiliated and yet stays.  When Sylvia resists Proteus and remains faithful to Valentine, Proteus says: “I will force thee yield to my desire,” throwing her to the ground and trying to rape her.  Sylvia is saved by Valentine, who had been hiding in the bushes.

This is a far cry from the beginning of the play and the is switch hard to swallow.  The laughs of the previous 90 minutes come to a screeching halt.  Even though Proteus vows his remorse, it is not enough.

Several performances stood out.  Thomas Brazzle as Proteus moved with passion and violence as needed.  Cloteal L. Horne was powerful as Sylvia, who could not be swayed.

Ryan Winkles played the loyal friend and lover as a gentle soul, who by his faithfulness won his heart’s desire. And Kate Abbruzzese made Julia’s loyalty and passivity easy to believe.

Also good were Jason Asprey as a cynical servant named Speed; and John Hadden as the hapless servant Launce.

Despite its plot convolutions and many devices, The Two Gentlemen of Verona, contains the seeds of Shakespeare’s talent.  This play, about the wonders of young love, also shows the loyal friend and lover, Valentine, as the one who reaps his rewards.  While sympathetic to Proteus at times, the betrayer is left standing in silence.