A Hatful of Rain at Berkshire Theatre Group

Once Provocative Play Is Rarely Revived 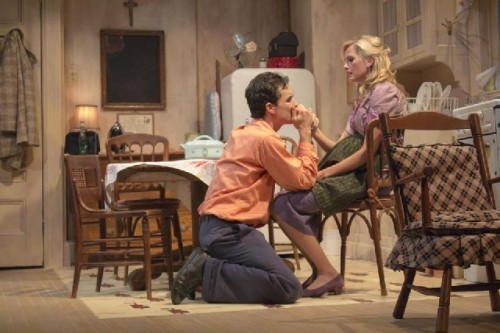 Returning from war as a heroin addict. Photos courtesy of Berkshire Theatre Group. 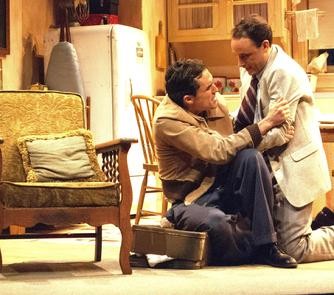 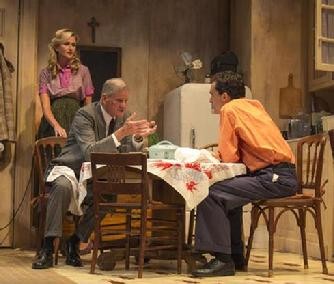 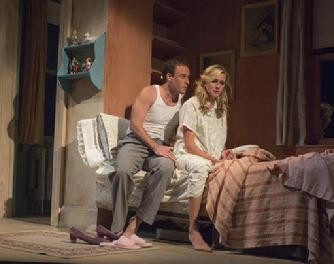 When A Hatful of Rain opened as a film in 1957, it was considered a harrowing picture of a taboo subject – drug addiction. Previously it had played for 399 performances on Broadway after it opened in October, 1955. At the time the drama had an impact but has rarely been revived as its then shocking theme has now been widely explored.

Bosley Crowther of the New York Times wrote a positive review of the film, “Most effective of its achievements is the emotional intensity it builds up, as it closely and candidly traces the behavior of a young married man, caught in the trap of addiction since he was hospitalized after fighting in Korea.”

Unfortunately, this production, directed by Greg Naughton, lacks the emotional intensity the original production and the movie produced. While the play has relevance to today’s veterans dealing with Post Traumatic Stress Syndrome, and sometimes resulting addictions, the material is dated. Too much information has been spread about war, its effects on families and society, to make these characters’ shock seem real.

Greg Keller as Polo Pope comes closest, portraying a lot of conflicted feelings for his brother, father and his brother’s wife Celia. You can feel him wrestle with his emotions, and you root for him. Stephen Mendilo on opening night, had some trouble with his lines, and conveyed less than needed to portray about a father who left his sons in an orphanage after his wife died, now wanting to re-enter their lives.

And Megan Ketch as Celia, displays little of the emotion one would expect from a wife living with a drug addict. Part of the ‘dated’ issue comes in when she has no idea her husband is a drug addict (using heroin twice daily) but assumes he is having an affair.

In addition, the underlying theme of A Hatful of Rain is betrayal and the raging emotions it can arouse. The father betrayed his sons; the Army betrayed Johnny, by getting him hooked on morphine; Johnny has betrayed Celia and himself; Polo has betrayed his Father by being a disappointment. These betrayals are mentioned, but the rage and disappointment don’t come through.

One highlight in the play is the portrayal of the ‘pushers’ who come across as strong characters, and bring some liveliness to an otherwise enervating production. Triney Sandoval as Mother struts the stage with authority; and Chris Bannow as Apples plays his sidekick with real personality.

Given the relevance of the topic, and current interest in the plight of veterans’ and the toll of combat on their loved ones, this is a play worth seeing. There were opening night glitches but perhaps as the actors feel more comfortable in their roles, the emotional price the characters pay for their many betrayals may resonate more fully.